You are at:Home»DC Entertainment»THEATER REVIEW: The Mountaintop: Powerful portrayal of Dr. King as a historical god and simple dying man
Tweet 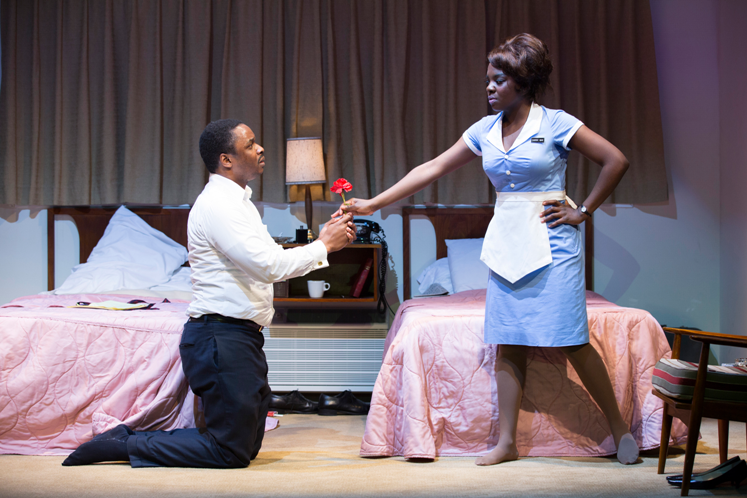 (L-R) Bowman Wright as Dr. Martin Luther King, Jr. and Joaquina Kalukango as Camae in Arena Stage at the Mead Center for American Theater’s production of The Mountaintop March 29-May 12, 2013. Photo by Scott Suchman.

Upon leaving Arena Stage Theater after taking in The Mountaintop, the prolific play by a brilliant 31-year-old African American playwright and protégé, several protestors greeted attendees at the door with protest signs. Some read, “Mountaintop, unfit for families,” a clear reference to the sexual controversy surrounding the play.  It would later become obvious that the protestors surely had never seen the play. Nonetheless, Katori Hall, the mastermind behind the encapsulating words in the play, must have known the controversy her writing would evoke, and somehow knew as the final words of the play were spoken, she would ultimately be redeemed.  Hall’s redemption overtakes and overwhelms the audience in a way that few playwrights have in this masterful production.

As The Mountaintop begins on April 3, 1968, the night before Dr. Martin Luther King, Jr.’s untimely 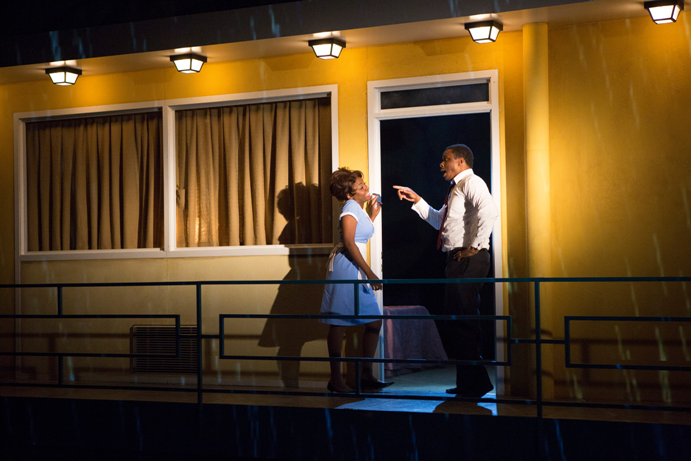 death, Camae, the maid at the Lorraine Motel in Memphis, Tennessee, enters his room alone and the dance between a prolific figure, history and controversy ensues with a touch of innocent seduction.  The comical seducting appears to be between King and Camae, two vibrant, exciting and sexually tantalizing beings flirting with the forbidden.  However, thanks to the brilliance of Hall’s words, it is the audience who is unwittingly seduced into believing they know the beginning and the uncomfortable end.  So the story moves on and Hall’s melodic writing is indeed akin to the lyrics of a powerful song.  Their conversation flows like life, and as we do in life, the audience gets busy living, laughing and loving the characters.

The first scenes are filled with the excitement of first love, King and Camae dance, smoke and curse with abandonment in a dichotomy like perfect sailors.  Joaquina Kalukango, who plays Camae, has a flawless delivery and the whimsical timing of Groucho Marx, as she flaunts Camae’s Tennessee southern accent.  Kalukango is genuine, taking the audience into the believable harsh south of the 1960s, and 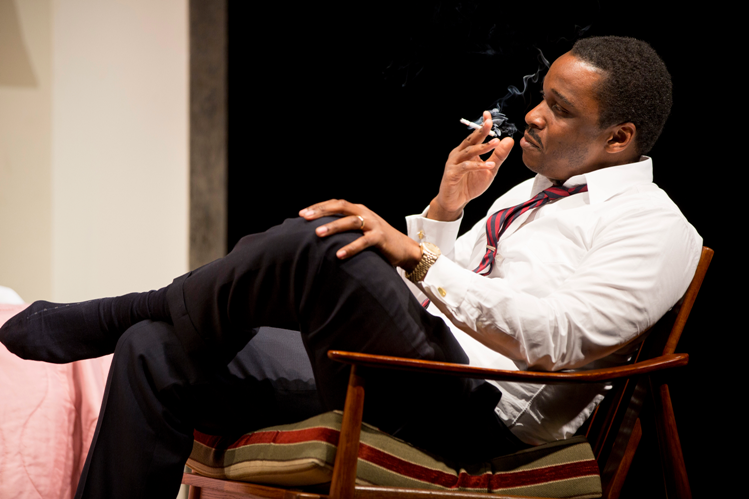 like the Sirens, she lures the audience to the rocks.

Bowman Wright, who plays King, channels the civil rights leader’s spirit so effectively, that the historical figure in our collective minds – including black and white video from the March on Washington – doesn’t ring true or touch us like the three dimensional, breathing, living, laughing, loving, lying and lamenting King standing before us.  He is alive as if for the first time.

When Camae, the street smart spitfire, calls King a sinner, it’s evident that her agenda is not to impress him.  Sinning, she says, is “a preacher’s job. How you know what you ain’t supposed to do unless you done it.”  King is drawn into her, even as she warns that she needs to leave, that he must remember his wife.  Yet, even in his excitement, there is an underlying sense of sadness, a sense of exhaustion in a man who has dedicated his life to a cause that would ultimately result in his death.  We hear him recite the history we know and the stories we have read repeatedly:  The strike by the sanitation workers; the bomb threats on his life; the bugging of his home by the FBI; the undermining of his work by government officials; the conflict between Jessie Jackson and Malcolm X; the Poor People’s Campaign and the March on Washington for Jobs and Freedom.  He laments the struggle to win the love of whites in the South.  “They (whites) hate so easily, and we (blacks) love too much,” he says, adding that he’s “so tired” of the struggle with whites.  Then quickly, he digresses, stating that his eloquent words might convince them to change.  “Nobody make it pretty like me,” he brags.

But the fear of death is loud — so deafening and obvious — and the historic icon collapses under weight of his own identity.  He 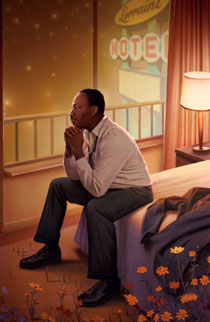 admits he’s afraid.  “I know the touch of fear more than I know the touch of my own wife,” he says. Yet, he somehow makes peace with his destiny, that “Memphis is the end of the road,” that “like most men, you ain’t gon be able to finish what you started.”

It is midway through the play when the drama explodes with ingenuity.  The audience members, who entered the theater with a notion of what would unfold in the play, will bewail their own cynicism, and like it often is in life, they won’t get what they expected.  Hall doesn’t disappoint us.  The turn of events will shock the viewer and restore their beliefs simultaneously.

It is the words of Camae that humbles and comforts King as it did the audience drenched by a night of realizations about the journey of every man and woman, no matter how noble.  “You just a man,” she says.  “Some say you a god and you got close, but you just a man.”

For King that epiphany the night before his death was serendipitously late in coming, yet right on time.  Death is the human equalizer, and Hall forces America to face the whole story of King’s death, not just his life.  He did come close to divinity, but he was just a man who devoted his life to a noble cause.  There is a King in every man or woman who is willing to pick up the baton and devote their life to serving humanity.  Dr. King made it look easy, so it’s neatly wrapped in our history and our minds.  The play beautifully shows a man who is devastated at the end of his life — as we all are — in the words of W. H. Auden, “he gave all his heart and lost.”