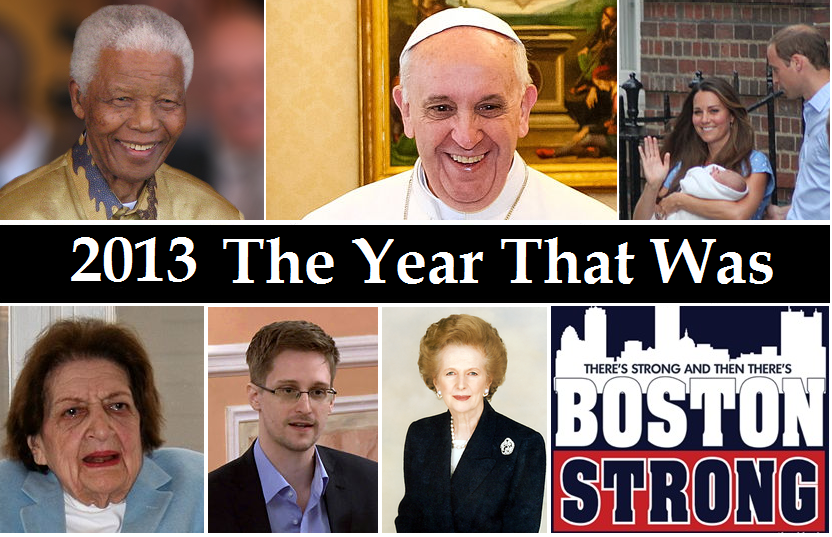 Mandela made history with his anti-apartheid efforts in South Africa, but influenced people around the world with his ideals of equality and peace. Mandela died on December 4, 2013.

Snowden drastically altered much of the public’s opinion on governmental involvement in the lives of private citizens, and went on to expose the inter-workings of U.S. government surveillance around the world.

Failure to reach a deal for a federal budget plan resulted in a shutdown of essentially all government agencies and set the tone for the state of bipartisan negotiations.

Pope Benedict XVI was the first Pope to resign in nearly 600 years, but the election of Pope Francis brought a new perspective to the Catholic Church and a future of reform, which focuses on aiding the poor.

The explosion at the finish line of the Boston Marathon on April 16, 2013 left 3 people dead and around 260 others injured. The two brothers, Dzhokhar and Tamerlan Tsarnaev, were responsible for the bombing and were driven by extremist Islamist beliefs.

The super typhoon that destroyed large portions of the Philippines on November 7, 2013 killed around 6,100 people and injured many more. It has gone on record as one of the world’s most powerful storms.

The shooting at the Washington, D.C. Navy Yard on September 16, 2013 left 12 people dead and 3 injured. Gunman Aaron Alexis was a former contractor for the Navy, but his ability to enter the DC building has raised many questions about security.

President Barack Obama succeeded in passing a historic healthcare reform act – the Patient Protection and Affordable Care Act — that became a controversial lightning rod for Republicans and a much-touted success for Democrats.  The government shutdown preceded the flawed rollout of the Affordable Care Act, both of which contributed to the Republicans, Congress and President Obama receiving their lowest approval rates in U. S. history.

President Morsi was overthrown by the Egyptian army on July 3, 2013 amidst protests and accusations of harsh rule and a strictly Islamist agenda.