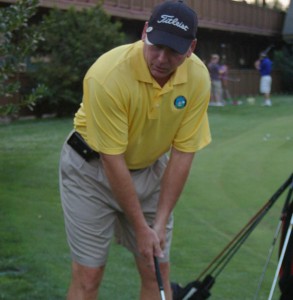 For almost his entire professional career, golf champion Tiger Woods was like King Midas—everything he touched turned to gold. He became a worldwide phenomenon in his mid-20s, and over the past decade has won 71 official PGA tour events, including 14 majors. His success on the green was met with endorsement deals, a marriage to a Swedish model and two beautiful children. Last fall, it was announced Woods was the first sportsman to become a billionaire.

But last November his golden world became much bleaker. After being accused of and later openly admitting and apologizing for multiple infidelities, Woods’ superstar dimmed as his personal life eclipsed his golf career and pristine image. Under immense public scrutiny and obvious personal stress, Woods took a break from professional golf in attempts to mend his marriage and no doubt reevaluate his lifestyle.

In April, he returned to the sport after 20 weeks to play in the 2010 Masters Tournament in which he tied for 4th place. Since his return, he has played in the Memorial Tournament and the U.S. Open, where he had underwhelming performances. Watching him play golf last month at the Bridgestone Invitational showed a broken Tiger Woods. Most conclude his game is struggling, because of his personal problems, while some others believe his golden touch was simply too good to last.

I visited the East Potomac Park Golf Course to ask some local amateur golfers what they thought was ailing Tiger’s game, as well as what they think he should do to improve it. A table of seasoned golfers relaxing after a round on the green believed he “needs a new putter” and “a new coach”. They agreed that his game could be back up to par with these things, along with a bit more practice.

However, Coach Nelson, a former golf coach from Woodrow Wilson High School in NW DC, believed that Woods’ game could be improved from one thing — re-channeling his inner strength: “He’s a little out of sync, he’s not that far off of his game; he should be there very soon. He needs to meditate a little more and fi nd his inner strength. That’s what made him great, his inner strength.”  The coach also stated that he thinks the public needs to allow Tiger to be himself — not what they expect him to be.  “It’s not about improving his game,” he says.  “It’s about finding his equilibrium again. They need to allow him to be himself. Every great player has their ups and downs — eventually things will level themselves out in due time.”

While professional sports can bring about both scrutiny and the spotlight, amateur golfers at East Potomac Park seemed content, relaxed with pitchers of beer after a game.  You would be were hard pressed to find an open spot on the practice range.  Meanwhile, golf pro Ron McNally was teaching a beginner’s golf class, showing students such as Thuy Cooper, who works for the Department of Transportation, how to hold the golf club and swing with a firm grip.  A good day on the green was had by all.

Woods may have fallen, both professionally and proverbially, but he wouldn’t have defined the sport for over a decade if he didn’t have the strength to play the next round.

MLB: Washington Nationals’ star pitcher Stephen Strasburg returned to the mound on August 15th after missing over two weeks of play when he was placed on the 15-day disabled list due to an inflamed left shoulder. Superstar pitcher Roger Clemens, best known for his stints with the New York Yankees and Boston Red Sox, was indicted August 19th for perjury on his steroid charge testimony back in 2008. The spot for first place in both the AL and NL East divisions is closer than ever as the season nears its end. Both of last year’s World Series rivals, the Yankees and the Philadelphia Phillies are vying for their respective division title.

NFL: The 2010 NFL pre-season officially kicked off August 8th. The Washington Redskins had an impressive showing against the Buffalo Bills on August 13th winning 42-17 and raising the hopes of Skins fans for the upcoming season. Veteran quarterback Brett Favre officially signed on for his 20th NFL season on August 18th, honoring the final year of his two-year contract with the Minnesota Vikings.

NBA: The Cleveland Cavilers debuted new team uniforms to signify a fresh start and a departure from the LeBron James era. Jerry Buss, the LA Lakers’ owner noted he is not intimated by the newly formed trifecta of talent in Miami during a press conference on August 17th. Wizards’ rookie and No. 1 draft pick John Wall took two weeks off from summer league due to tendonitis, but was present during the NBA rookie photo shoot in New York City on August 17th and expressed his excitement at the upcoming season.