Only a month ago, both the Capitals and the Lakers looked invincible. Both teams had bounced back from season low points to finish at the top of their divisions.  A week ago, championship dreams began to unravel, and as of yesterday they were crushed completely.

After winning 4 out of 5 games in the first round of the playoffs, the Capitals had plenty of time to rest and practice before meeting their Round 2 foes.  Unfortunately, the Tampa Bay Lightning had no mercy for the Caps, who had stolen the division title from them once again. After losing the first two at home, the Caps looked to return the favor to the Lightning by embarrassing them in front of their own fans.  Instead, the Caps faltered, losing two more in Tampa before heading home to empty their lockers. Caps owner Ted Leonsis was brutally honest when he took to his blog to discuss the Caps’ collapse and apologize for letting down the fans. “The wheels fell off for us,” Leonsis stated. “No doubt about that. I am stunned we were swept in Round 2.” He went on to say that the team was lacking “energy and production” and that they “weren’t resilient.” But Leonsis summed it up best when he said, “Their role players outplayed our highest-paid players,” –a line I’m sure did not go unnoticed in the locker room.

Yesterday, the Lakers shocked no one more than themselves when they were swept out of the playoffs by the Dallas Mavericks.  It marked only the fourth time in history that any multiple NBA champion was swept; the last anomaly occurred with the 1996 Houston Rockets.  It was a 122-86 pounding by the Mavs, who sent the Lakers home empty-handed for their first season in two years.  The back-to-back World Champions looked more like amateurs on the court, which progressed into full blown immaturity by the fourth quarter. Lamar Odom, of newly found reality TV fame, had only 10 points and two rebounds Sunday before he was ordered off the court for a cheap fourth-quarter shove of Dirk Nowitzki. But it didn’t stop there. The embarrassment continued when Andrew Bynum elbowed Mavericks guard Jose Barea only moments later, leading to another ejection. The game was all but lost by then, but not before Bynum shamed himself further yet by tearing off his jersey before leaving the court.  Such juvenile behavior was reminiscent of a toddler who stomps and screams until it gets its way. Unfortunately for Odom and Bynum, they weren’t in a sandbox and both are grown men.  Besides the end of the season, the loss marked the end of Phil Jackson’s reign as the most successful NBA coach of all time. It’s sad that such a revered coach had to go out on such a low note. As Ron Artest told reporters afterwards, “It’s going to be a loooong summer.”

While the Nats beat the Marlins on Mother’s Day last year, this year was a different story.  The Nats (16-18) got embarrassed by the Marlins yesterday, when they were shut out 8-0.  They’ve been less than spectacular against division rivals so far this year, and last week was no exception. They were effectively swept by the division leading Phillies in three games last week, who scored 18 runs against Washington and their ex-team mate Jayson Werth.  While they were able to semi-redeem themselves against the Marlins, winning 2 out of 3 games, they couldn’t get the sweep. Livan Hernandez, an ex-Marlin, was Washington’s pitcher Sunday. He allowed six runs on eight hits in just five innings Sunday. Afterwards, Hernandez said “You have to make sure you get out there and get out of tough situations…It didn’t happen today, but there’s nothing you can do about it now. I’ve got to go be ready for the next start.”  The team is now headed to Atlanta for a three-game series before turning to D.C. to host the Marlins next weekend. 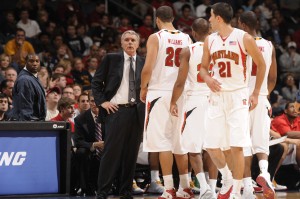 of Maryland men’s basketball coach.  As a Maryland alum and fan, who was lucky enough to interview Coach Williams last fall, I would like to thank him for his 22 years of service and unwavering dedication to the university and it’s men’s basketball program. It will certainly be no easy task to replace him, and the games will feel a little empty without him fist pumping on the sidelines. Thank you Coach Williams; Maryland will always love you!