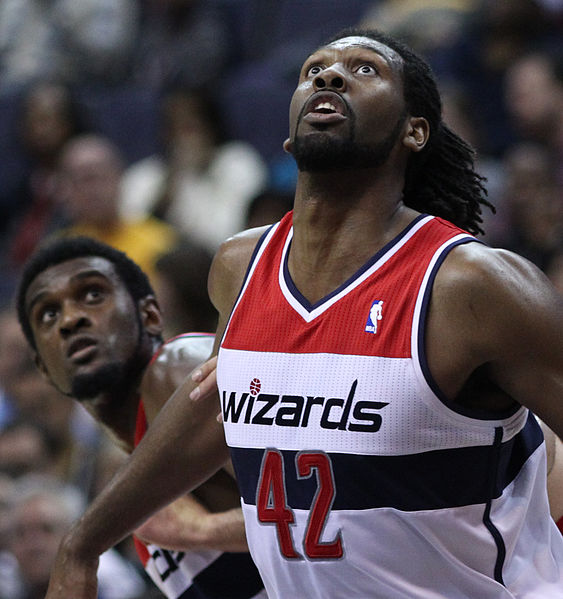 Each round of the NBA playoffs is seven games, but the Washington Wizards needed just five to eliminate the Chicago Bulls and win their first playoff series since 2005. The win coincided with the return of Brazilian big man Nene, who sat out during Game 3 due to one-game suspension. The power forward was electric in his return, finishing with 20 points, eight rebounds and seven assists. John Wall also delivered, scoring a game-high 24 points with seven rebounds.

The Bulls seemed as if they were staging a comeback late in the game when they cut the score to 70-67 with 3:32 remaining. But the Wizards controlled the clock and the game by grabbing three offensive rebounds in the final minutes. After the Wizards extended the lead to five on free throws, it was clear the game was over. Bradley Beal tossed the ball away in the final seconds.
“It just shows our continued growth,” Beal said of the win. “We played great basketball in this series and we can only continue to get better and better.”

The 75-69 victory will advance Washington in the playoffs for just the third time in franchise history. They will face either Indiana or Atlanta next in the Eastern Conference semifinals; the Hawks currently lead the series 3-2.

Donald Sterling
Over the weekend a scandal broke in the news after a taped conversation between L.A. Clippers owner Donald Sterling and then-girlfriend V. Stiviano surfaced with Sterling making disparaging and offensive remarks about African Americans, including Lakers great Magic Johnson.  Many called for new NBA commissioner Adam Silver to take swift and strong action against Sterling, who has been accused of racist remarks and actions in the past.

Michael Jordan, Bulls great and current owner of the Charlotte Bobcats, released a statement articulating his reaction. “I look at this from two perspectives — as a current owner and a former player,” Jordan wrote. “As an owner, I’m obviously disgusted that a fellow team owner could hold such sickening and offensive views. I’m confident that (NBA commissioner) Adam Silver will make a full investigation and take appropriate action quickly. As a former player, I’m completely outraged. There is no room in the NBA — or anywhere else — for the kind of racism and hatred that Mr. Sterling allegedly expressed. I am appalled that this type of ignorance still exists within our country and at the highest levels of our sport. In a league where the majority of players are African-American, we cannot and must not tolerate discrimination at any level.”
After Silver was able to confirm the authenticity of the recording, he announced his ruling Tuesday, handing Sterling a lifetime ban from the NBA and a hefty $2.5 million fine (the most allowed by league regulations).

While Sterling has yet to comment on the decision, many NBA stars, both past and present, have come out in support of the decision. LeBron James tweeted “Comissioner Silver thank you for protecting our beautiful and powerful league! Great leader! #BiggerThanBasketball #StriveforGreatness”, while Shaquille O’Neal wrote “Way to go, Commisioner Silver! The NBA stands for everybody!”

Johnson, who had a personal connection to the story, tweeted a simple statement of support: “Commissioner Silver showed great leadership in banning LA Clippers owner Donald Sterling for life.”  With the ban likely forcing a sale of the Clippers, many are speculating who the next owners will be. Johnson’s name has been swirling since the weekend, but on Monday he denied a report that he is interested in buying the team. “I am always going to fight for African-Americans, as well as Latinos…minorities,” he said. “I am going to fight for them to the death. That’s where I invest my money. That’s who I hire.”