You are at:Home»Sports»Sports Insider Weekly»SPORTS INSIDER – Lady Terps fall to UConn in the Final Four
Tweet 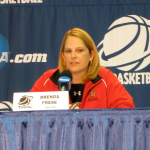 Under the sunny, cloudless sky, baseball returned to Washington, D.C. on Monday afternoon.

Max Scherzer, the multi-million dollar free agent the Nats nabbed over the winter, took the mound for Washington in their season opener against the Mets. The ace took a no-hitter into the sixth inning, but his debut was spoiled by two errors by shortstop Ian Desmond. His miscues gave the Mets a 3-1 lead, which the Nats were unable to overcome.

Despite the strong pitching, Washington’s bats were fairly quiet. This offensive hole was caused by the loss of Jayson Werth, Denard Span and Anthony Rendon to the 15-day disabled list.  Washington’s only run came in the fourth, on a solo home-run by Bryce Harper. The young outfielder has now gone long in three-consecutive season openers.

Though they dropped their first game, it was still an exciting day for Washington baseball fans. Earlier in the day Nationals Park was announced as the host of the 2018 MLB All-Star Game. The last time the midsummer classic came to the district was in 1969, when it was hosted at RFK Stadium by the Washington Senators.

On Sunday evening, in front of a near-capacity crowd that included movie star Tom Cruise, the Lady Terps’ magical season came to an end.

Despite UMD coach Brenda Frese insisting her team would not be intimidated by the women of UCONN, for the better part of the game the Lady Terps were outscored and outplayed. Though the game started out fast and close, the Huskies started to pull away mid-way through the first half, when they went on a 10-3 run. By half-time, they led by 11.

Maryland’s struggles continued into the second half. UCONN went on a 7-0 run in the first four minutes to extend their lead to 18. Two three throws and a jumper saw Maryland cut the deficit to 14, but they were unable to make the defensive plays to keep the game close. The Lady Terps simply had no answer for Breana Stewart and Morgan Tuck, who combined for 49 points. As a team, Maryland scored just 58.

“I’m proud of our fight,” Frese said. “Like I told the team in the locker room, look at a season and go 34-3 and look two of the three losess coming from teams playing for the national championship. That’s a heck of a season.”

Despite the loss, Maryland (34-3) has much to be proud of. They were undefeated in their first season in the Big Ten, and had won a school-record 28 straight games before Sunday’s loss. In addition, this was their consecutive Final Four appearance.

“The next progression is where Notre Dame’s gotten themselves to,” coach Frese said afterward. “That’s the next step for us. Consistency factor was the key to getting back to back. I’m really excited when you talk about our future. We’re graduating one senior and to have the sophomore class come back, I’m really excited.”