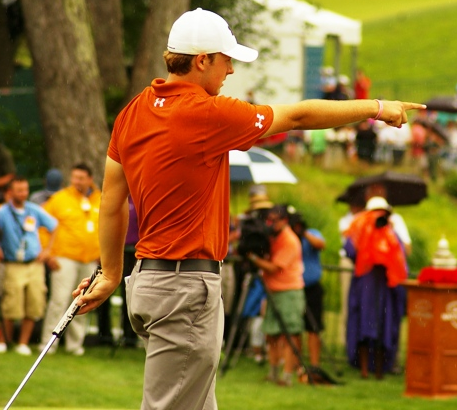 Anyone looking for the future of golf need look no further. Jordan Spieth, the 21-year old Texan and latest Masters champion, has officially arrived.

“Playing with Jordan, he’s going to sort of fly the flag for golf for quite a while,” runner-up Justin Rose said. “People were getting excited about that out there. You could tell.”

Spieth burst onto the golf scene in 2013, winning his first major championship, the John Deere Classic, that July. In 2014, he made an impressive Masters debut, where he tied for second and became the youngest runner-up in Masters history. But it has been 2015 that has cemented him as one of the elite golfers in the world today.

Just last month, Spieth won the Valspar Tournament–outlasting Patrick Reed and Sean O’Hair in a three-way playoff–to become the No. 6 ranked golfer in the world. He followed that up with a historic performance at the Master’s this past weekend, when he tied Tiger Woods’ scoring record (-18) and became the second-youngest Masters winner ever (behind Woods, 1997).

“This was arguably the greatest day of my life,” Spieth said of the win. “To join Masters history and put my name on that trophy and to have this jacket forever, it’s something that I can’t fathom right now.”
Spieth, who won by four strokes over Justin Rose and Phil Mickelson (274), faced some stiff competition from both veterans on the final day. Rose got within three shots of Spieth on more than one occasion. Mickelson holed a bunker shot for eagle on the par 5 15th hole, but didn’t make another birdie the rest of the day.

Despite the pressure, the young golfer remained calm and collected–hitting birdies on holes No. 10, 13 and 15–the latter making him the only player in Masters history to reach 19-under par at any point on the course.

While the golf world is looking forward to what the future holds for its newest star, Spieth is still reeling from his latest, and so far greatest, accomplishment: a green jacket.

“This was the ultimate goal in my golf life,” he said.

The No. 1 golfer in the world, Rory McIlroy, finished fourth, while  Hideki Matsuyama rounded up the top five. Woods, who injured his wrist on the 9th hole, finished in a tie for 17th place.