You are at:Home»Metro Events»METRO EVENTS – Tim Russert: Icon of journalism in the Newseum exhibit
Tweet 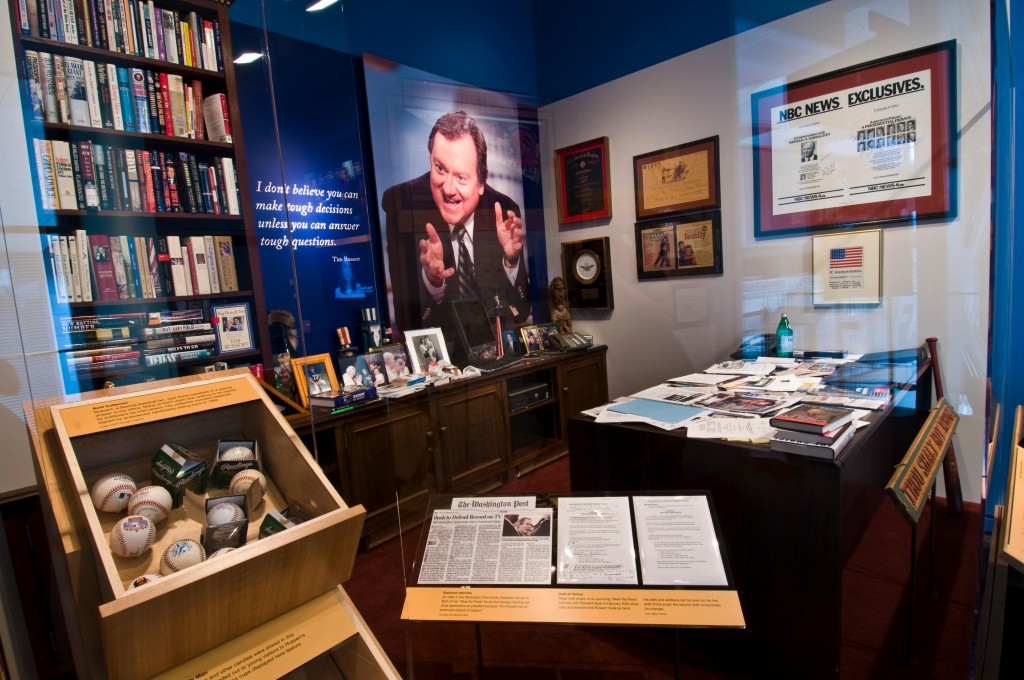 Through February 2012, the Newseum is holding the exhibit “Inside Tim Russert’s Office: If It’s Sunday, It’s ‘Meet the Press.’” Russert, the host of NBC’s “Meet the Press” for 17 years, died prematurely of a heart attack in 2008. The exhibit is a recreation of how his office appeared as Russert was preparing for the news show at the time of his death. He hosted the show from 1991 until his passing; he was its longest-running host. Under his leadership, “Meet the Press” became a political proving ground. He interviewed key political players, working day and night at NBC during election years. His subjects included Bill Clinton, Newt Gingrich, John McCain, and Barack Obama, who are featured in a video about the exhibit at the Newseum’s web site.

The exhibit showcases the amount of preparation that Russert put into each show. The office is filled with Russert’s books, research, and handwritten notes, including his notes for an interview with George W. Bush in February 2004. There is also the large wooden sign that Russert kept at the front of his desk, which proclaims “Thou Shalt Not Whine.” Visitors can imagine themselves behind the scenes as Russert pelted candidates with questions such as the one he asked of Clinton in 1992. “Can you assure the Democrats across the country this morning that there is nothing in your background that might emerge which would doom your candidacy and the Democratic Party?” he asked. Russert was known for his hard-hitting interview style, but his executive producer Betsy Fischer said, “[He] would always say that you can ask a tough question, but you need to do it fairly and you need to do it with respect to someone.” Russert’s research and notes show how careful he was to ask questions that were well-informed and accurate, so that he never accused or put someone on the spot unfairly.

The more personal aspect of Russert’s office is the photos of his family. Russert had a strong relationship with his father, whom he called “Big Russ,” and often asked for advice on the public’s opinion of his shows. He also formed a close relationship with his son, Luke Russert, who has followed in his father’s footsteps as an NBC news correspondent. His office holds a photo of Russert beaming at Luke in his baseball uniform. He was not afraid to display his affection for his family on the air.  On a Father’s Day show, at the close of the show, he added, “Happy Father’s Day, especially to Big Russ up in Buffalo, and Luke, I’m real proud to be your daddy.”

The Newseum exhibit provides insight into one of the most important political commentators in recent history, in how he achieved his work and held politicians accountable to viewers and as a person who cared deeply about people and family values.

For Newseum information and to purchase tickets, visit their website:  http://www.newseum.org/tickets/tickets-overview/index.html