You are at:Home»Top 10 People»TOP 10 Most Interesting People 2010»The TOP 10 (#8) Tim Shriver: Putting the fun back into community service
Tweet 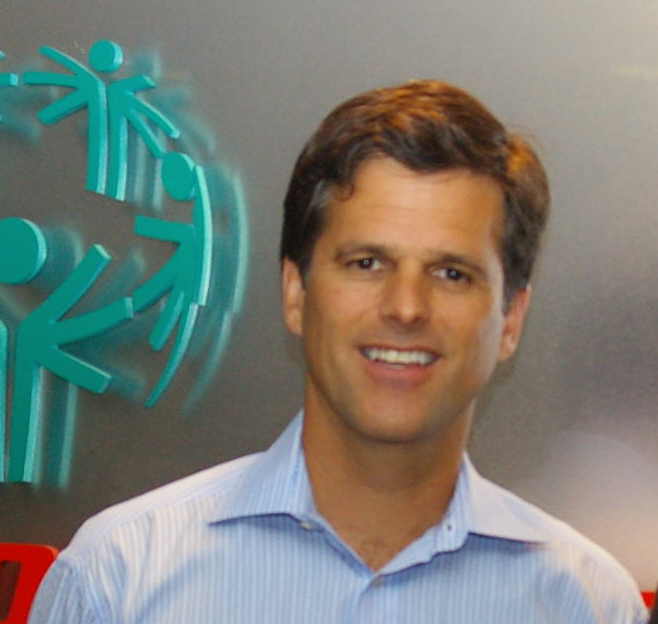 As Tim Shriver walks into the room and takes his seat, he glances over and makes a funny clown face and laughs.  Shriver is the president of Special Olympics and despite the loss of his mother, Eunice Kennedy Shriver last year, there is reason to celebrate.  The inaugural Eunice Kennedy Shriver Day was celebrated nationally and internationally on September 25th, and on October 23, the EKS (Eunice Kennedy Shriver) Challenge will bring all who were inspired by the founder of Special Olympics together to reminisce and enjoy an athletic event and grand party in her honor.  Looking back over his life, the position Shriver has taken in the organization is a role he has understudied the majority of his life, by watching his mother perfect it.

“We grew up in what today would be considered suburban Washington, but in 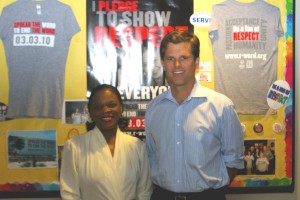 those days it was a farm…It had cattle and sheep and ponds and woods and tomato and asparagus and broccoli and plants and so on…” Shriver remembers.  “And probably the most unusual part of my childhood was my mother was very active in advocating for people with intellectual disabilities in those days.  So she decided, because there were so few opportunities…and such limited chances for children with developmental disabilities, that she would have summer camp for them in our house on this farm.”

Shriver’s memories of his mother reflect upon a woman who was an athlete herself, but never comfortable with the limited roles given to women decades ago.

Terrel, an employee at Special Olympics International and Tim Shriver

“So she had this anger; she had this love of her sister and she had this love of sports and she had a great faith in the human spirit and a great faith in the fact that everybody mattered.  So, she brought all that together and said it’s time to make a difference,” Shriver says with pride.  “So beginning when I was very small — four or five years old — during the summer, this farm would turn into a camp.”  Pony rides and swimming lessons were the sports of the day along with kickball and volleyball games.  Initially, “Camp Shriver”, the original name of the Special Olympics, was a small backyard event, but in time the activities grew.  “It has taken over me!” Shriver says when speaking about the Special Olympics today.

“My parents always wanted their children to be involved in things that were important, things that made a difference,” says Shriver.  “We had a strong sense of conviction that our life really was about making the world a more just, more fair, more equitable, more harmonious place, more peaceful place.  My dad was involved with Peace Corps and fighting poverty.  My mom was involved with Special Olympics and fighting discrimination.  So they weren’t politicians, really, but they believed strongly in the idea that each of us had the chance and deserved the chance to make a difference.”

The secret to service is no secret to the Shriver family or the extended Kennedy family as their legacy of service is well-documented.  The secret to passing the values of service to small children is a well-known secret in the Shriver/Kennedy family:  make it fun.  “A lot of people think of service to your community or community service – that’s what you’re suppose to do.  In my family, that’s what you enjoy doing,” Shriver says.  “We had a lot of fun.  So, we grew up in an environment where people thought it was important to make a difference, and it was fun to make a difference.”

“In my vision for Special Olympics…it’s all about taking that energy and the joy of changing the world,” Shriver explains.  His hope and vision for 2011 is that every child throughout the world at some point in their childhood education will play on, volunteer or support a Special Olympics team.  With that enormous vision, Shriver says he doesn’t think it’s too much to ask, because in that participation, the human society would collectively take on and tackle that common feeling of being different and being “left out and excluded.”

On October 23, Shriver and his family of brothers and sister, Maria, will celebrate the accomplishments of their mother during the EKS Challenge in Washington, DC.  The event includes a combination of activities:  bike riding, walking and running.  Participants are sponsored by friends, co-workers and family members, and the money raised from donations benefits Special Olympics and Best Buddies.  Best Buddies, founded by Shriver’s brother, Anthony, unites people with disabilities with members of the general public to build lasting friendships and relationships within the community.  Shriver would like for the event to be an annual celebration in years to come.  “The EKS Challenge is about all those things:  volunteer, get involved, ride your bike, bring your family, celebrate difference, raise money, make a difference…yourself,” he says with a fervent passion that is reminiscent of his mother.  “What have you done to better the world?” she would ask.  Thanks to Special Olympics, Tim Shriver has an answer.