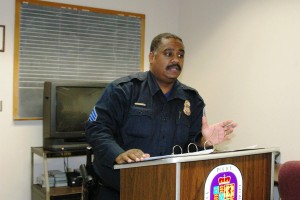 At about 7:45 pm, when Sergeant Floyd Tate, a 14-year veteran in the police department, got the troubling call, I was 15 minutes away from the end of my shift.  I had already put in 5 hours, so this was more than a full day for me.  As I prepared to put the gun and handcuffs away – figuratively – Sergeant Tate decided to take this last call.  I asked with the experience of any policewoman and partner out on the beat, “So what was that call about?  Where are we headed?”  “There’s some sort of riot going on in a neighbor by some apartments,” he replied.  “We’ll go check it out.”  We hurried to the scene – without flashing lights and sirens – and upon arriving were besieged by 20 to 30 rioters on a dark neighborhood street.  There were no visible street lights, except the glimmers from the candles in many of the rioters’ hands.  They seemed to be dressed in black or dark clothing, but without the lights, that was unclear.  However, their voices were very clear.  They were yelling and chanting at the officers who had arrived before us.  As more officers arrived in unmarked and marked cars, the rioters moved into the street, held up their fists and yelled at the cops as they got out of their cars.

To see the full interview of the ride-along, go to http://www.DCSPOTLIGHTTV.com

Although, Sergeant Tate knew the background of the call, he did not immediately reveal it to me.  Although I had 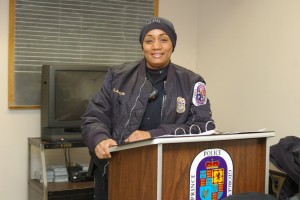 gotten out of the car at other stops, he warned, “Don’t get out of the car.”  As the crowd grew louder and angrier, I sat watching as several officers attempted to approach them and effectively calm them down.  After about 15 minutes of negotiating and attempts to peacefully resolve the issue, several protesters became irate and disorderly and were arrested, handcuffed and put into the squad car.  This act alone seemed to calm the crowd.  Minutes later, Sergeant Tate walked back to our car and in the background the flicker of candles in the hands of some of the rioters lit up the night as the protesters walked in circles.

“What was that about?” I said clearly a bit shaken.  He said they were rioting, because days before, a policeman had shot a relative of theirs and “tonight that relative died.”  He indicated that the scene could have been much worse, but the officers used a strategy that allows the crowd to express themselves and their emotions without becoming disorderly.  “They’ve lost a relative and they’re angry, which is understandable,” he said.  It was only after a few of them became disorderly that several were arrested. 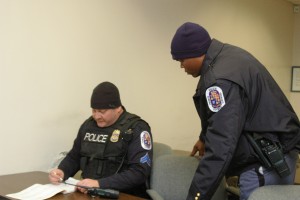 As we pulled away, I realized that this was truly the end of my shift and effectively the end of my career as a policewoman for a day.  I had naively, yet bravely walked into the District 3 police station earlier that day searching for the essence of life as a Prince George’s County officer.  I had seen all of the news reports on the corruption scandal in the police department and the arrests of several cops on the squad, but I wanted to know for myself what made the department tick.  I wanted to know why “PG cops”, as they are endearingly and derogatorily called, always seem to get a bad rap.

When I got in the front seat of squad car at around 4 p.m. that evening, I felt a sense of adventure and my knees shook.  However, after we got our first 911 call and made our first stop, the realization of the danger of working as an officer in Prince George’s County hit me like a ton of bricks.  During the first incident, three males were stopped, and they all insisted that they were minors.  After running a routine background check, it was determined that one of the males had a warrant out for his arrest.  This quiet scene of three large males cooperating with the officers could have easily disintegrated into a fight or gun-fire when the officer returned with the damning news.  Instead, the male with the warrant was arrested, handcuffed and put into the squad car, while the other two males were released.

Our second 911 call involved a domestic dispute between an adult male and his parents.  The male had become violent and attacked his parents.  On entering the home after the incident, Sergeant Tate put on the “father” hat that he has often had to do over the years.  During the entire night of patrol, he insisted that we, as a society, are “losing our black males to the streets.”  He lamented the passive roles that mothers, fathers and caregivers in families are taking in the lives of children today.  He stated that parents are not involved and there are no places for young kids to get guidance anymore.  He also blames a generation of young people who believe they are entitled to have everything without working for it.  The lack of teen and youth centers leaves kids vulnerable to the streets he says.

Soon our third 911 call came in, and it was from a bank robber.  As the old saying goes, “Sometimes the truth can be stranger than fiction,” and this call was a testament to this fact.  Earlier, a male suspect had entered a bank and robbed it, taking an undisclosed amount of cash.  Upon arriving home, the male later insisted remorsefully that his conscience had begun to bother him, so he called 911 to report himself.  He actually called the department and asked officers to come to his home, pick up the money and arrest him for the crime.  By the time we arrived, another officer was on the scene along with the FBI.  The suspect had been taken away, and the FBI was searching the home for the stolen money.  Nothing could have prepared me for this call, but as with many situations, crime and punishment and criminals are complicated.

As the night progressed, Sergeant Tate and I took a coffee break during the shift – just long enough to stand on the sidelines of a local chess game at the Starbucks in Forestville.  He and I both are avid chess players.  After a quick cup of Joe, it was back to patrolling the streets.

Our fourth 911 call was regarding a two-car collision.  When we arrived to the scene of the crash, the Mercedes Benz was embedded into the side of an SUV and practically totaled.  As I walked up to the mutilated bumper of the Mercedes, another car swerved in toward me.  I quickly realized that in an instant, a 911 response can become an accident for myself, so I videotaped the cars and put the camera away for the moment.  The damage on both vehicles would seem to indicate that the passengers were seriously injured, yet all involved, including the children in the SUV, walked away from the crash.

We managed to take in a minor speeding violation and ticketing incident, but those routine stops are hardly worth discussing when compared to other stops.  Toward the end of the shift, Sergeant Tate and I pulled into a store parking lot, where four other police cars were parked.  The squad cars — under the cold dark of night, after a previous day of snow – were lined up in a formation so that the other four officers could all talk to us without leaving their cars.  The ingenuity of the parking amazed me.  It was toward the end of the night, and they were checking in with the boss, who happened to be my partner that night.  The only female on the squad joked that the criminals must have known that I was coming out tonight, “because this has been a lite night.”  I would have begged to differ, but I was only a rookie with 5 hours under my belt.  They all thanked me for coming on the patrol, as Sergeant Tate and I pulled away from the pack, and we watched them drive off into the night to answer a 911 carjacking call.

My shift had come to an end.  My patrol day was over.  The camaraderie of the squad and the jovial back and forth of the officers with me and their colleagues were enormously alluring.  It seriously made me think of ways to join the department.  At the end of my shift, I felt that urge to “serve and protect” the community.  I understood the calling many officers felt when they initially joined the police force.  That sense of wanting to keep the citizens safe is a powerful urge.  However, instead, I thanked Sergeant Tate that night and walked back to my car and into my life as a journalist.  Being a cop is difficult, challenging and at times a sad commentary on life. You don’t know if this will be the night you save a life or the night someone takes your life.  That is the reality Prince George’s County cops live with everyday.  As I drive around at night or hear the sirens of a local patrolman in my own neighborhood, in my own county, I often wonder what the officers in District 3 are encountering tonight.  It is extremely difficult to dislike a cop, a squad, a district, a department or a county once you get to know them.

Special thanks to the Prince George’s police officers in District 3: