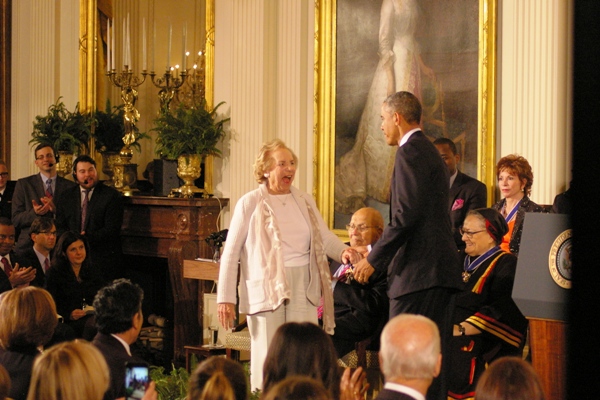 WASHINGTON – President Obama welcomed the recipients of the 2014 Medal of Freedom to the White House on November 24. Eighteen awards were given to leaders in the fields of science, journalism, the arts and political activity and activism. The Medal of Freedom is the United States’ highest civilian honor.

Held in the glittering East Room on the ground floor of the White House, the event was attended by the families and friends of the honorees. In attendance also were the First Lady Michelle Obama and Vice President Joe Biden.

President Obama spoke about the accomplishments of each of the honorees in turn, and about the tragedies and triumphs that made up their lives before presenting the medals to the recipients. The ceremony lasted about an hour before the reception for honorees and their families.

Obama’s speech contained personal anecdotes about many of the awardees, from the congresswoman in his home state of Hawaii, Patsy Takemoto Mink, to the law professor who offered him a job before he first ran for office, Abner Mikva. The president joked of being in love with Meryl Streep, a fact his wife is apparently well aware of, and also mentioned that he and the First Lady both had a long-time appreciation for the music and life of Stevie Wonder. 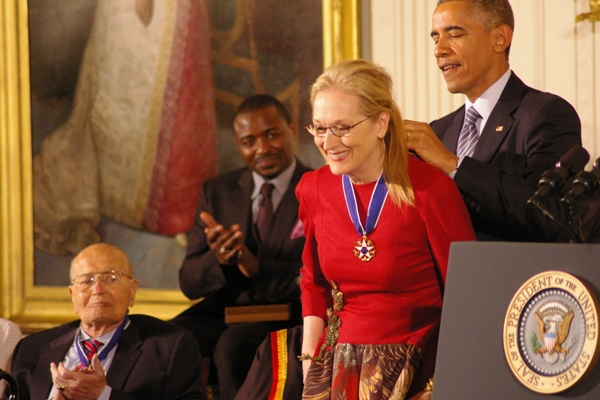 The president expressed appreciation for the steady presence of Tom Brokaw at the anchor desk through world events from the fall of the Berlin Wall to the terror attacks on September 11, 2001. He also lauded the work of activists Suzan Harjo for her work to support Native American rights. Obama mentioned Marlo Thomas’ work with St. Jude Children’s Hospital and laughed together in remembrance of her 1970s hit “Free to Be You and Me.”

Commendations were given to Mildred Dresselhaus and Robert Solow for their important research in their respective fields of science and economics. John Dingell’s long service in Congress was remembered by the legislation he supported and helped push through, including the passing of the Affordable Care Act. 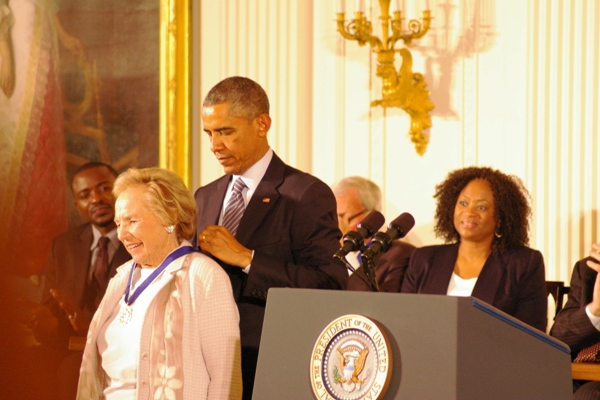 Five medals were awarded posthumously, collected by members of the awardees’ families, and Obama took the time to remember the achievements of each of the men and women whose lives were being honored by the medal. These awards were in remembrance of Alvin Ailey, Edward R. Royball, James Chaney, Andrew Goodman and Michael Schwerner.

As President Obama placed the medal around the neck of each honoree, a member of the armed services read out the biography of each. The posthumous awards were presented on an encased mount and given to the family members.

President Obama announced the awardees by stating, “I look forward to presenting these nineteen bold, inspiring Americans with our nation’s highest civilian honor. From activists who fought for change, to artists who explored the furthest reaches of our imagination; from scientists who kept America on the cutting edge to public servants who helped write new chapters in our American story, these citizens have made extraordinary contributions to our country and the world.”

Stephen Sondheim was unable to attend the event, and so will be awarded the Medal of Freedom at the 2015 ceremony. 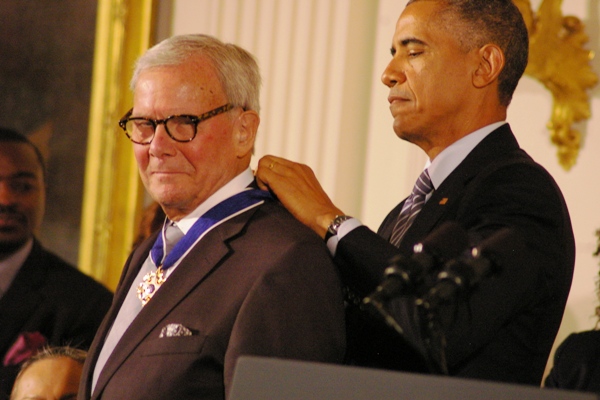 Ethel Kennedy founded the Robert F. Kennedy Center for Justice and Human Rights, a foundation focused on the cause of social justice, environmental protection and poverty reduction, named for her husband.

The longest-serving Member of Congress in American history, John Dingell, was first elected in 1955 as a U.S. Representative for Michigan. Dingell’s support for civil rights legislation, environmental protection and Medicare and the Affordable Care Act have made him an influential legislator.

Abner Mikva was a five-term Congressman from Illinois, the Chief Judge of the United States Court of Appeals for the D.C. Circuit and White House Counsel during Bill Clinton’s term in office. He once offered the position of law clerk to President Obama around the time he first ran for 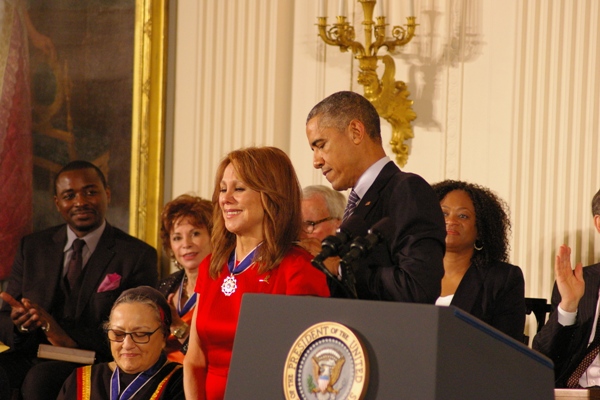 the Illinois Senate seat he won in 1997.

The award for Patsy Takemoto Mink was collected by her daughter. Mink was a 12 term Congresswoman from Hawai’i, now retired. She became the first woman of color elected to Congress in 1964.

Suzan Harjo has worked as a writer, curator and activist for the rights of Native peoples beginning in the Carter administration. She currently serves as president of the Morning Star Institute.

Isabel Allende began her illustrious writing career with her first novel, The House of the Spirits in 1981. Allende, once a journalist in her native Chile, has published 21 books, which have sold 65 million copies in 35 languages.

Meryl Streep has earned the most Academy Award nominations of any actor for her work in film and theater. Streep has been praised for the diversity of her roles, which cover a large range of human experience from drama to comedy.

Stevie Wonder is known as one of the world’s most important and talented singer-songwriters. His unique mix of rhythm and blues with rock and roll and reggae transcends genre. Wonder has won 25 Grammy Awards, an Academy Award, a member of the Rock and Roll Hall of Fame and a Kennedy Center Honoree.

Tom Brokaw served as the anchor of NBC Nightly News from 1982 to 2004, and now works as a Special Correspondent for NBC News. His work has been recognized with Edward R. Murrow Lifetime Achievement Award, two Alfred I. duPont-Columbia Awards from Columbia University, eleven Emmys, and two Peabody awards.

Robert Solow’s work in the field of economics from the 1950s to the 1970s formed the basis of much of modern American and global economic practice. Solow was awarded the Nobel Memorial Prize in Economic Sciences in 1987.

Marlo Thomas has become through her life an actress, producer, author and social activist. Thomas’ work as Outreach Director for St. Jude Children’s Research Hospital, which was founded by her father, has helped advances in research into pediatric cancer and children’s catastrophic diseases.

Charles Sifford’s drive to become a professional golfer at the top level even in the face of discrimination and harassment helped to desegregate the sport. In 1960, he broke the “Caucasian only” policy of the Professional Golfers’ Association to win official PGA events and be inducted into the World Golf Hall of Fame in 2004.

A medal each was awarded to three participants of the 1964 Freedom Summer voter registration drive. James Chaney, Andrew Goodman and Michael Schwerner were civil rights activists working in Mississippi with a movement to help register African American voters blocked from registering. The young men were murdered, and their deaths were catalysts in the landmark civil rights legislations that followed.

Alvin Ailey founded the Alvin Ailey American Dance Theater, which is well known in the art field for seminal explorations of the African American experience through modern dance. The theater has hosted performances in 71 countries.

The first Mexican-American to be elected to the U.S. House of Representatives was Edward R. Roybal. Roybal founded the Congressional Hispanic Caucus and the National Association of Latino Elected and Appointed Officials. His work opened the door for all those Latino leaders who have and will follow in his footsteps.