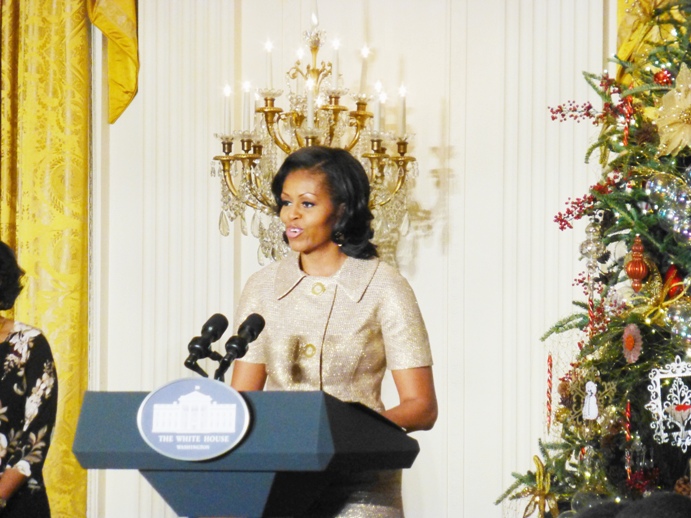 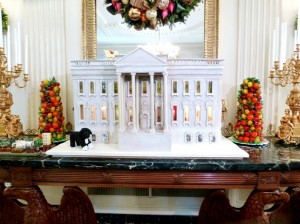 On Wednesday, November 28th, First Lady Michelle Obama unveiled the 2012 White House Christmas decorations to an audience of military families and select media. This year’s theme was “Joy to All,” a celebration of holiday cheer, past traditions, and public service. Mrs. Obama paid homage to first ladies of the past, particularly since 1960 when Jacqueline Kennedy began the tradition of having a holiday theme with Nutcracker inspired décor at the request of her daughter. In the grand foyer, two large Christmas trees were decorated with the ornaments—some replicas and others originals—of prior first ladies.

Another tradition continuing this year was the construction of an elaborate 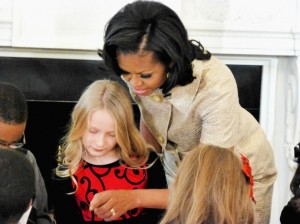 300 pound gingerbread White House. This year, executive pastry chef William Yosses included a gingerbread and marzipan garden, complete with beehives to reflect Mrs. Obama’s dedication to healthy eating. On the front steps of the edible White House was a disproportionately large replica of the First Dog, Bo Obama. In her welcoming speech, Mrs. Obama joked that the proportions represented Bo’s importance to the family, drawing laughs and “aww”s from the audience. Throughout the holiday displays, guests could find various Bo-inspired ornaments.

The First Lady spoke for about ten minutes, introducing the ideas that inspired 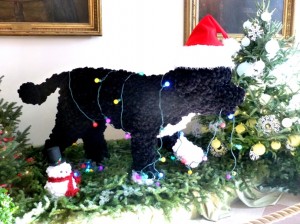 the decorations, lauding the hard work of volunteers in pulling off the elaborate display, and coming almost to tears thanking the families of soldiers for their services and sacrifices. In a packed East Room, she often spoke directly to the children who were seated down front, mentioning that they were an inspiration to herself and her husband. The first tree that visitors encounter as they make their way through the exhibition of holiday décor was hung with ornaments made by families of fallen heroes.  She explained that all members of Gold Star families were invited to create personal ornaments that would be added to the tree. In front of the tree was a table where guests could fill out declaration of service cards, honoring the sacrifices of military personnel and pledging their own commitments to public service or volunteer work. 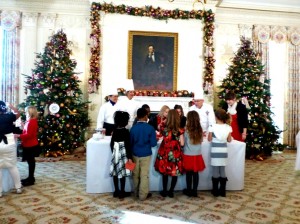 House decorations as 6:37 a.m. the day after Thanksgiving in order to complete the setup in time for the official unveiling. No corner was left without a garland; no doorway was left without wreaths. In the Green Room, a winter wonderland theme included hand-blown glass ornaments with miniature live terrariums commemorating the First Lady’s love of gardening. The Red Room was filled with garlands resembling bundles of fresh produce. The largest tree, standing at nineteen feet and dubbed the “Joining Forces” tree, filled the center of the Blue Room as a dedication to those who serve in the military. It’s decorated with ornaments handmade by American children living on military bases around the world.

After the speech, she invited the military children to follow her to the West 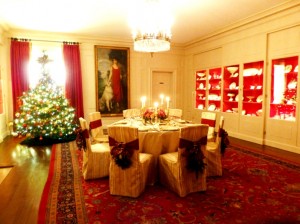 Room, where she joined them in decorating cookies between two beautiful Christmas trees and under a stately portrait of Abraham Lincoln. The children beamed and clambered for individual attention, giggling when the First Lady asked one of the chefs to help unclog the gold frosting dispenser.  She traded hugs with the crew of chefs and leaned down to speak eye-to-eye with the children. There was no denying the holiday spirit that filled everyone at the White House that day.