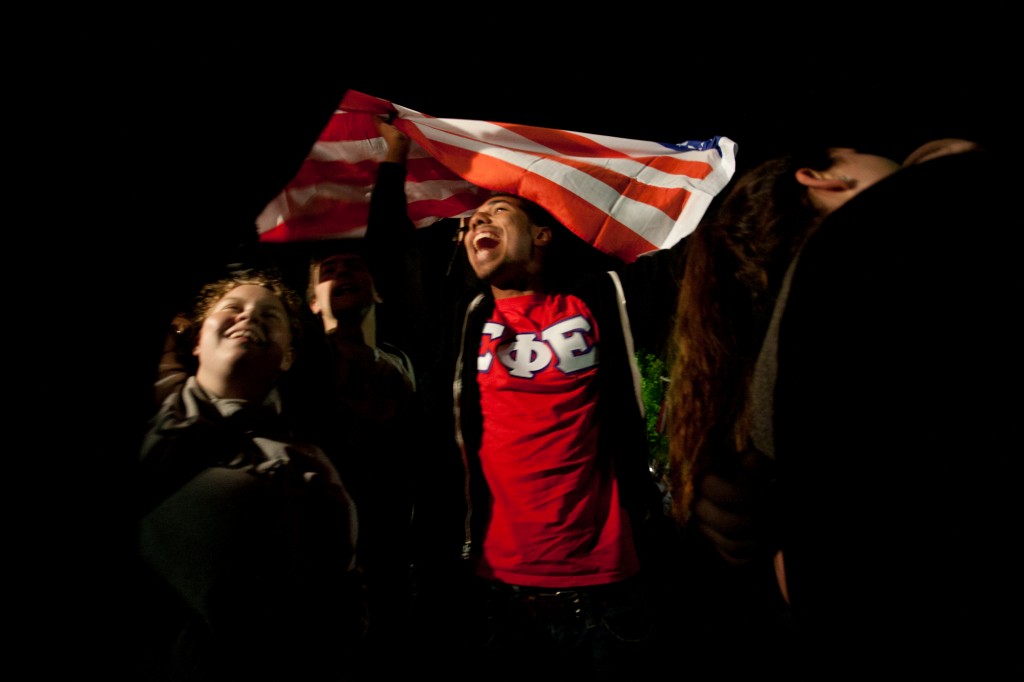 A spontaneous gathering of thousands took place in front of the White House on the night of May 1st, and it was not a crowd of politically-divided partisans, but a united group celebrating the death of Osama bin Laden – a man many believed would never be required to pay for crimes against the American people and so many others.By the next day, the crowds had died down.  But the mood, if less raucous, was still jubilant.

“In one word: ecstatic,” is how Chris Trotter, visiting Washington from Columbus, Ohio, described his reaction upon hearing that bin Laden had met his end.  Trotter and a friend, on what he described as a “baseball vacation,” had been in New York the prior day for a Yankees game.  Afterward, they made their first-ever visit to Ground Zero to pay respects to the over 2,700 people who died there during the September 11th attacks by bin Laden’s al Qaeda terrorist organization.

Trotter and his friend heard the news of the al Qaeda leader’s death as they drove into Washington later that night and realized that they had probably been at Ground Zero just as the operation that led to bin Laden’s death was taking place.  “Tonight,” President Obama told us — on the morning of May 2nd in Pakistan — “I can report to the American people and to the world that the United States has conducted an operation that killed Osama bin Laden, the leader of al Qaeda and a terrorist who is responsible for the murder of thousands of innocent men, women and children.”  This is how bin Laden will be remembered to most.  President Obama declared bin Laden’s death “the most significant achievement to date in our nation’s effort to defeat al Qaeda.”

Osama Bin Laden, born in 1957 to a Saudi family rich, not from oil, but from constructing a substantial percentage of Saudi Arabia’s roads, took much credit for ousting the Soviet Union from Afghanistan in 1989.  By then he had formed al Qaeda in 1988 and become dedicated to fighting against any foe who went to contrary to his particular form of Islam – a form of Islam most mainstream Muslims denounce. 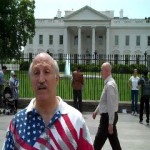 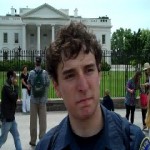 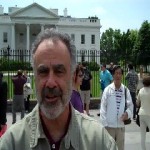 He turned his attentions to the West, spurred on by the Gulf War – during which US troops had been stationed in Saudi Arabia, which bin Laden saw as an affront to Islam.  As early as 1990, al Qaeda plots against US targets were discovered.  After smaller operations throughout the 1990s, bombings at the US embassies in Tanzania and Kenya in 1998 resulted in hundreds of deaths.  As a result, bin Laden’s name first appeared on the FBI’s Most Wanted list.

It was the attacks on September 11th, 2001 that brought al Qaeda into US public consciousness; although it was some time before bin Laden himself admitted his involvement – which some still dispute.  But as the principle financer of al Qaeda, bin Laden became the focus of US anti-terror policy soon after the war in Afghanistan began.

US military operations in Afghanistan included a pursuit and assault on the caves of Tora Bora; however, bin Laden, already accustomed to living in secrecy, disappeared.  Over the following years, he materialized only occasionally through taped messages.  Rumors sometimes arose that he had already been killed and that the messages attributed to him had been faked.

The assumption, though, was that he was still alive, on the run, and living a shadowy existence in the squalor of a cave somewhere in the wilds along the Afghan border within Pakistan.  However, countless other higher ranking al Qaeda officials – such as reputed 9/11 plotter Khalid Sheik Mohammed and 1998 embassy bombing plotter Ahmed Khalfan Ghailani, captured in 2003 and 2004, respectively – had been apprehended in Pakistani cities and suburbs.

“Last August,” President Obama stated on May 1st, “after years of painstaking work by our intelligence community, I was briefed on a possible lead to bin Laden.”  The lead was a courier – one of those through whom bin Laden delivered messages to his subordinates and the world; one of a few people considered to have access to bin Laden himself.  His identity had been confirmed, along with his residence in Abottabad, a small city not far from Pakistan’s capital. 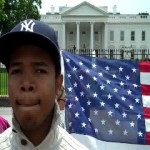 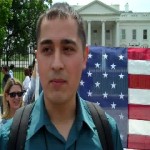 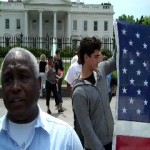 The compound where the courier lived with another courier and their families was a complex many times the size of any surrounding buildings, built around 2005 with massive, barbed-wire-topped walls and with no telephone or internet connections.  U.S. military troops found bin Laden and members of his family also sharing the building.  Though the intelligence community has been streamlined in the nine years since the 9/11 attacks, the confirmation of bin Laden’s location and preparation for the assault on his compound could not be rushed.

It was determined that a drone strike would likely result in civilian casualties and a diplomatic disaster.  Instead, SEAL Team Six – the Naval Special Warfare Development Group out of the Training Support Center Hampton Roads in Virginia Beach – began specialized training nearly one month in advance of the assault, code-named “Operation Geronimo.”  While the White House and CIA followed the events on a video feed, helicopters carrying the SEAL unit entered Pakistani airspace from Afghanistan and deposited the SEALs within the Abottabad compound.  One of the helicopters crashed during the process.  The circumstances of the crash are still unclear, but no Americans were reported injured in the operation.

The SEALs quickly subdued the compound and isolated bin Laden and his family.  When he offered resistance, a gunshot to the head killed Osama bin Laden.  The operation took about forty minutes.  “There is no doubt that al Qaeda will continue to pursue attacks against us,” the President has stated.  “We must and we will remain vigilant at home and abroad.”  Following the cheers and unbridled patriotism of the night before, the awareness that bin Laden’s death would not, in itself, end the United States’ war on terror, became more readily apparent.

“This is a significant blow to them,” said Gabriel Acevero, a Maryland resident originally from Trinidad and Tobago.  But, he added, “It doesn’t necessarily mean that, as an organization, that they have somehow shattered, because al Qaeda is like any other terrorist organization, a hierarchical organization and his death just ushers in someone else becoming the leader of al Qaeda.”  At the same time, he pointed out, “This is definitely a political victory for Obama. This President never ceases to amaze me,” says Arno, a DC resident who grew up in the same Chicago neighborhood as the President.  He was clearly pleased that the Obama administration earned the victory. 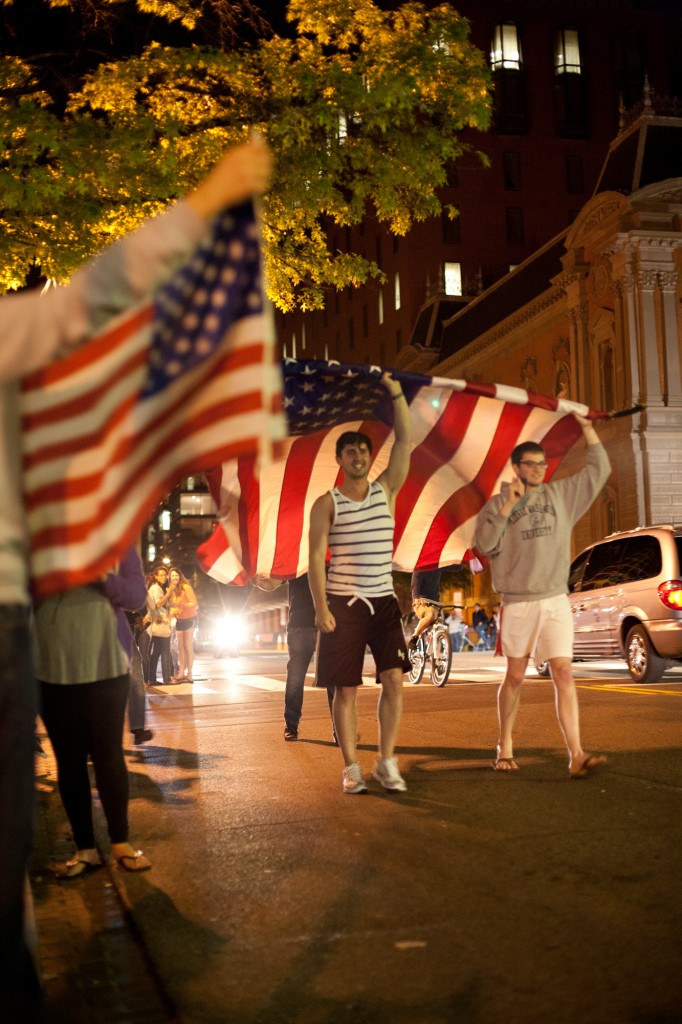 Most agree that the President’s approval rating will see a significant lift following bin Laden’s death.  Long-term, most are aware that there are still other issues with which President Obama must contend. “It’s a feather in the cap, but he’s got a ways to go yet,” said Joe Pisciotta, a former history teacher from Falls Church, mentioning the nation’s ongoing economic troubles.  Pisciotta, wearing an American flag shirt, came to the White House on Monday to get a feeling of closure.  Having taken pictures following the September 11th attack on the Pentagon, he felt the story had now come full-circle.  He expressed relief for the families of those who died, including the soldiers lost in the wars launched following the September 11th attacks.  Upon hearing the news of bin Laden’s death, he felt “very elated, like everyone else, that we had finally cut off ‘the head of the snake.’”

Ari Basen, a student at American University, came to the White House “to pray for peace, and not celebrate [bin Laden’s]death, but to say Kaddish” – the Jewish prayer of mourning.  “We must respect our enemies, and, through respect, understand them.” Syeed Malik, an American Muslim from Philadelphia visiting DC on business at the time of bin Laden’s death, feels the way many Muslims do. “The things that Osama did were not of the Koran.”  He adds, “There’s great joy in myself and in my family members, because we know that some part of evil is gone.  It’s just a good day…I hate to be overjoyed, because Islam teaches us not to be happy about someone’s death, but… there needs to be recompense,” he says.  “You will pay your debts in this life or in the next, and I prefer in this life.”

Offering a similar sentiment from a different perspective, Eddie Germino, who describes himself as an atheist, says “Osama bin Laden went back to the nothingness from which he came, and that makes me feel happy.” Those feelings were shared by Americans of all backgrounds and many others around the world.