You are at:Home»Features»The Nation»Endeavour’s Final Lift Off: The end of an era, not NASA
Tweet

“We’re always going to have some skeptics that don’t think that the money that goes into NASA is money well-spent.  But I know the taxpayers get a tremendous return on their money from NASA.” 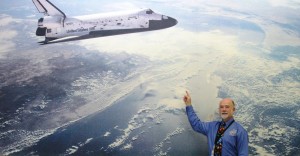 Is it a lack of interest, the cost or both that led to the demise of the Space Shuttle Program?  With such vast speculation, what is next for NASA?  These questions are the proverbial elephants in the room today, May 16th, as journalists, longtime NASA employees and family members of the staff sit in a darkened space center control room at NASA Goddard Space Flight Center in Greenbelt, Maryland.  The anxiety and anticipation is palpable in the room as the final 10 seconds of the shuttle launch countdown comes to an end.

Within  moments, with hearts pounding and eyes glued to the widescreen monitor, the Endeavour shuttle dramatically lifted off its launch pad, headed for outer space and into its place in American history.  “It was a beautiful launch,” declared Jim Bangerter, Network Director for the Human Space Flight at Goddard Space Flight Center.  On this morning, the space shuttle began orbiting the Earth on its final mission.  “The shuttle is just a beautiful machine,” Bangerter adds. 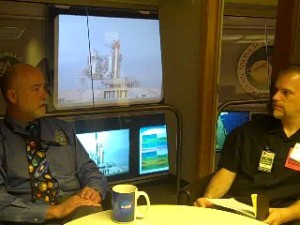 Despite her injuries suffered during an assassination attempt in January, Arizona Congresswoman Gabrielle Giffords was on hand in Florida to watch her husband’s final shuttle mission get underway.  Four-time shuttle pilot Mark Kelly drew extra attention to the launch because of the finality of it all and the added storyline of a wounded congressman and her devoted astronaut husband.

This publicity, along with the hype over the end of the thirty-year-old Space Shuttle Program (the final flight of the Discovery planned for this summer now remains), has created a stir about this mission and about the space program in general.  Yet, why has it taken such circumstances to bring attention back to NASA? 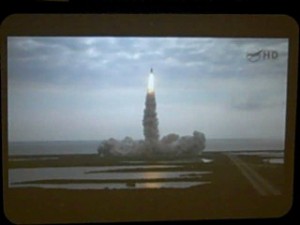 Don Thomas flew on four shuttle missions from 1994 and 1997, and today he is Director of the Hackerman Academy of Mathematics & Science at Towson University outside Baltimore.  “I’ve had people say, early in my career, ‘Gee, isn’t the shuttle kind of boring?  We’re not going to the Moon; you guys go in circles around the Earth and don’t do much…’”  These people, says Thomas, just don’t understand; crews perform up to 100 different science experiments during a two-week mission.  “They just don’t want to hear too much about the details of the science,” he says.  “They want to know ‘How do you go to the bathroom?  How do you eat up there?  How do you sleep?  How do you exercise?’”

Undaunted, Thomas says “I think the space program is equally exciting today as it was 30 years ago when the [Space] Shuttle program started, and 40 years ago when we were landing people on the Moon.”  Thomas visits 90 schools per year to talk about his experiences and inspire students to take an interest in math and science.  “I’ll talk to 15,000 kids or so [each year], and they’re all excited about space,” he says.  “There’s something magical up there.” 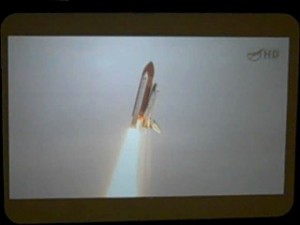 “It’s no different than when I was a little boy, excited about the Mercury astronauts.”  He remembers watching Alan Shepard become the first American in space at his elementary school in Cleveland, Ohio, and thinking, as so many did: “I want to do that!”

“This passion and dream I had never left me,” he says.  “It really motivated me to do my best in school, to work hard.”  He received his bachelor’s degree, master’s degree and doctorate, and at 27, he began applying to become an astronaut.  “My first time, I felt like my grandmother and I had the same chances of getting in,” he recalls.  So he took flying lessons, scuba lessons, went skydiving, taught a college course and finally moved to Houston to get his foot in the door.  Through perseverance, he achieved his dream and was selected to be a NASA astronaut on his fourth attempt. 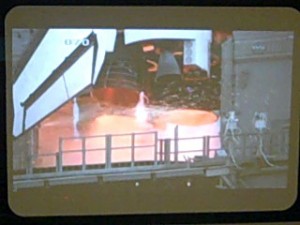 This story has undoubtedly made an impression on the students with whom he has spoken. “These are the kids that will be going maybe back to the Moon, maybe on to Mars – and whatever I can do to help that generation now is really time well spent,” admits with pride.  Roger Clason, Goddard’s Deputy Chief of the Exploration and Space Communications Division, is also aware that the Shuttle Program can be an inspiration to new generations, as it was to him.  “I have some young nephews who think it’s really cool that I work at NASA.  Although, they don’t really understand how somebody can work at NASA and not be an astronaut,” he says.

Clason’s division is responsible for development, maintenance and operation of the Near-Earth and Space Networks, the ground and satellite based networks which provide communications and tracking services for NASA.  He has seen firsthand the evolution of equipment, which may be the primary reason why the Shuttle Program is being phased out.  “If I go to a ground station now, it tends to be really large buildings with a few racks of equipment in one corner,” he says.  “Things are getting smaller, but also a lot faster.”  That simply means a lot of empty space at old ground stations on Earth.  In space, it means smaller satellites and the possibility of smaller space crafts.  “The shuttles do go through periodic upgrades of individual components,” says Clason, “but to a certain extent you can’t get away from the design that was done back in the 70s.”  That design was built to house computers that were huge, slow by today’s standards and heavy.  Therefore, the expense of the orbit itself was astronomical.

Clason believes this is a primary reason for the end of the Shuttle Program.  “Obviously the technology has changed a huge amount,” he says.  New technology, he insists, “will make things much less expensive, much more capable and I think also safer, and that’s a key aspect.”  So although the Shuttle Program is winding down, the next generation of U.S. manned space flight is already in the works.  The Orion spacecraft, originally a part of the Constellation Program, which was cancelled last year, is expected to begin manned tests as early as 2016.  Long-term plans include taking men back to the Moon and eventually to Mars.

This should happen “within the next twenty years, at most,” anticipates Dewayne Washington, Communications Officer for Human Space Flight at Goddard.  Mars exploration – possibly NASA’s highest profile work at the moment – will continue with unmanned missions, including a new rover to be launched next year.  This will be a follow-up to the successful Mars Lander Program.  “The idea was to launch two vehicles and see if we could get one to land [on Mars], and hopefully do 90 days of science experiments,” says Washington.  “Fortunately, what happened was both landed successfully, and both have been continuously providing [data]back to us for more than six years now.”

Notable plans over the next several years will include the follow-up to NASA’s high visibility project of the past two decades, the Hubble Space Telescope.  “Goddard right now is building the next generation space telescope — it’s called the James Webb Space Telescope — that will use technologies that we’re just bringing to a readiness level,” explains Roger Clason.  “It will be beyond low Earth orbit and will have capabilities [which are]generations beyond what Hubble has.  It will launch in the next few years.”

In the coming weeks, after the final shuttle launch, there will be significant layoffs at Cape Canaveral.  But, due to Goddard’s plethora of other projects and responsibilities, Jim Bangerter does not expect to see a great impact in Greenbelt.  “Certainly the loss of the Shuttle Program will be felt, but NASA’s pretty resilient.  We don’t just do shuttles,” he remarks confidently.

Space communications and mission support have come to be major activities at Goddard.  “We provide all the communications capabilities, and we monitor and manage all the systems that [NASA] needs to communicate with the vehicle in space,” Bangerter explains.  “We’re pretty much the focal point and the vital link in all the communications.”  But the nation’s first space flight center was established in 1959 to serve a range of functions, including the development and production of new technology.  With important roles in the production of the James Webb Space Telescope and in the ongoing exploration of Mars, plenty of work is continuing at Goddard.

When the final shuttle Atlantis launches later this year, the attention will be on the Johnson Space Center in Houston and the Kennedy Space Center in Florida.  Goddard and the other seven major U.S. space research labs receive less publicity, but fulfill vital roles in the space program and in scientific research.  The benefits of the space program seem to be taken for granted.  From the technology it has helped to create and its impact in every field of science, to its satellite data helping clean up the BP Gulf oil spill and assisting tsunami relief workers in Japan, many in the public quickly forget its value.

The Smithsonian Air and Space Museum has already opened an exhibit which will be completed later this year and feature space exploration over the last three decades.  Much of the focus will be directed towards the future with information on the International Space Station and the state of international collaboration on continued space exploration.

But another part of the exhibit will look back; it will provide a bookend for the shuttle era, when space flight went from front-page headlines to occasional features in weekend science sections.  It will highlight moments in national celebration of our prolonged, global effort to learn about our universe.

The Russian Soyuz spacecraft will continue to carry passengers to the International Space Station, while unmanned craft from Europe, Japan, Russia and the U.S. will continue to deliver cargo and perform other missions.  Will there will be a lag in U.S. interest in the space program when the Shuttle program ends?  Will skepticism and budget cuts make the U.S. a minor player in future space exploration or will the public adapt to the cooperative nature of 21st century space science?

Those with close ties to the space program are not worried. “We’re always going to have skeptics,” says Jim Bangerter.  Many people “don’t think that the money that goes into NASA is money well spent.  But,” he continues, “I know the taxpayers get a tremendous return on their money from NASA.”

“I love the space program,” says Don Thomas.  “This is what I’ve wanted to do since I was six years old.”  If the public is kept aware of the benefits of the space program, new generations of astronauts will be able to say the same thing.