Washington, D.C. City Council hopeful A.J. Cooper had never intended to run for office, until it seemed he had not other choice.   “Anyone who knows my family knows that we have a history of public service and a history of politics, so when I was growing up I wanted to do the exact opposite,” said Cooper, who resides in the same two-story house where he was born, just off Georgia Avenue in northwest Washington, D.C. “Like most young folks, you don’t want to do what your parents are doing; that’s boring. Unfortunately, it seems like we can’t escape our destiny.”

For anyone who knows Cooper, it isn’t surprising that he’s chosen the one career path he swore he’d never pursue.  As a teenager, Cooper was twice featured in Teen People Magazine as one of the “20 Teens Who Will Change the World.” He was the host of “Teen Summit” on the television channel BET, and has won numerous NAACP Image Awards. He was also given the key to the city of Birmingham, Alabama for his service to the community, including encouraging young people to practice safe sex and use seatbelts when driving. 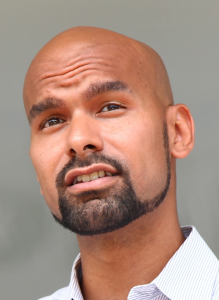 Now, as a 32-year-old DC Council candidate, Cooper is devoted to helping the youth of the capital and the nation. Cooper’s drive to defend young people may have begun while he was in high school, but it was not until shortly after he enlisted in the U.S. Marine Corps that it truly began to shape his life. According to Cooper, he became disenchanted with television and sought a more meaningful and adventurous vocation. “The young people of this city and our country are our greatest natural resource,” Cooper said. “If we don’t do everything we can to make sure they have the best chance possible of success, then what’s the point of anything? What’s the point of momentary wealth if the next generation is uneducated, or uninspired, or apathetic? What’s the point of everything that we’re doing if the children aren’t going to be able to enjoy those things? I think that too many people in our city have lost sight of that. It’s an afterthought to them. Everything that we do in this city needs to be tailored around making sure that the children have the best chance possible for success.”

“The whole reason that I did TV was because I wanted to do something that meant something. I wanted to help people,” Cooper said. “As I progressed in my entertainment career, I realized that entertainment isn’t what I thought it was. It’s a selfish kind of game.

It was at that point that Cooper opted to follow in the footsteps of his uncle, Major General Gary Cooper of the Marines, dropping his budding television career to serve in the military. In 2008, he graduated from the U.S. Marine Corps Officer Candidate School.

“I decided I wanted to do something that meant something, something that’s not pretend [or]for show,  something where I’m really putting myself on the line.   So I joined the Marine Corps,” said Cooper. “Everybody in my family [asked], ‘What are you doing?’ But you know, it was the greatest experience of my life, and it wasn’t easy.  I’ll say that as an understatement. But the things that we learned there about what family really means, about honor, courage, and commitment, about putting people before you and really caring about the other people in your platoon more than you care about yourself, is something that we need here in D.C.

Now, four years removed from his time in the military, Cooper is running a campaign on the same values and principles that were expected of him as a Marine.

“In the Marine Corps, when it’s time for chow, the highest ranking officer eats last and the lowest ranking enlisted person eats first. We make sure our junior marines are taken care of before we take care of ourselves,” said Cooper. “That’s the way city government should work. Our city officials shouldn’t be living high on the hog and just out here like playboys and living in these huge mansions, while 30 percent of the children in this city are living below the poverty line or while poverty has increased [by]a third. They should be making sure that those vulnerable people get taken care of first. 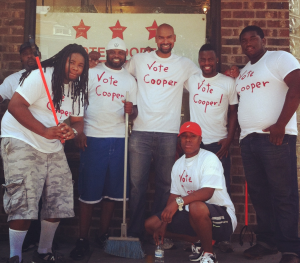 “What I hope to accomplish is putting the children of this city first in everything we do,” added Cooper. “Making sure that every child has the best chance possible at success, and we can do it. They want us to believe that the challenges we’re facing are bigger than us. I don’t believe that. I believe that our challenges are definitely something that we can overcome.”

To conquer those challenges, Cooper, if elected, is prepared to meet those issues head-on. According to him, full-time employment for the parents of young people is imperative; while cleaner, safer schools and innovative learning techniques are a necessity.

“Our kids are growing up with iPods; no wonder they’re bored going into school in a classic classroom setting,” Cooper said. “We need to teach them for the future, not teach them for the present or the past.  That’s going to take new, young leadership—a leadership that understands the capabilities and the potential that young people have.”