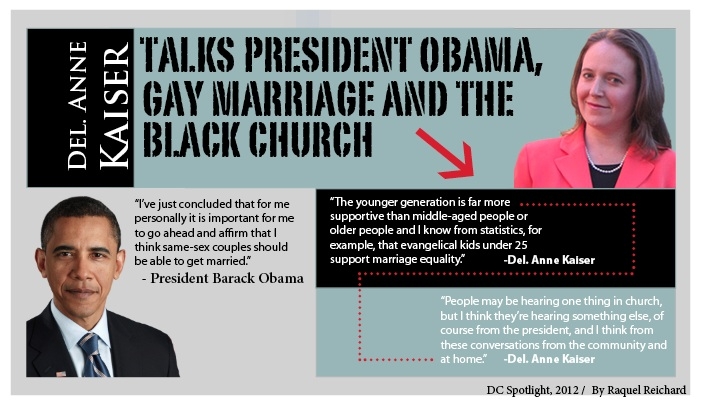 In May, President Barack Obama caught the nation off guard when he announced his support for same-sex marriage. But no group has had more qualms over his historic decision than the black churches that, until now, have overwhelmingly supported the president.

Though scores of African-American pastors and Christian leaders have allied with the president, many of which find his decision threatening their faith, some contend that Obama’s decision is a direct contradiction to God’s word. Others agree with the president, citing the Golden Rule of the Christian faith as “[treating]others the way you would want to be treated.” Though still a number of leaders, whether embarrassed, undecided or uninterested in the topic, remain silent.

Promptly after the president’s announcement, the National Association for the Advancement of Colored People supported his decision by releasing a resolution advocating marriage equality. All but two of the organization’s board members, who include many religious leaders, backed the resolution.

“Civil marriage is a civil right and a matter of civil law,” NAACP President Benjamin Jealous said in a statement. “The NAACP’s support for marriage equality is deeply rooted in the Fourteenth Amendment of the United States Constitution and equal protection of all people.”

But Reverend Anthony Evans, president of the National Black Church Initiative (NBCI), disagrees with President Obama and the NAACP.

“The NAACP is wrong by categorizing that [marriage]. It is not a civil right; it is a privilege and it is sanctioned by the church and blessed by the church,” Evans said. “[They’re in the] same position the president is in—nobody appointed them to the word. There is nothing in biblical, church or modern literature as marriage equality. It has no validity, so whoever argues this, made up words and the church will have none of that.”

Evans believes the president is asking the church to ignore God’s commandments. He said that the president’s endorsement of same-sex marriage violates his Christianity, because as a Christian, he is supposed to obey the teachings of the church.

“He is theologically out of bound. We are going to have to sanction the president if he continues to go down this path,” Evans said.

The NBCI, a faith-based coalition of 34,000 African-American and Latino churches comprised of 15 denominations, has already taken steps to excommunicate the NAACP and all church leaders who participate with the civil rights organization.

“By the end of 2013, there will be no more meetings by the NAACP in black churches. Most clergy who support biblical marriage will turn in their membership [to the NAACP]directed by me,” Evans said. “If you are a Christian, you can’t be a member of the NAACP. You cannot have two masters. It’s church tradition or world tradition. We’re giving them enough time to decide to turn in their membership.”

Eric Wingerter, vice president for communications for the NAACP, said he could not comment on the NBCI’s announcement because he was unaware of its undertakings and unfamiliar with the organization’s involvement with the NAACP.

But not all black churches are united in their opposition to marriage equality. In 2009, more than 100 clergy, mostly African-Americans, gathered in Washington, D.C. to support same-sex marriage. Reverend Dennis W. Wiley, who hosted the pro-gay marriage rally, has been very vocal about his thoughts on marriage equality. Wiley, a contributing writer for the Washington Post’s faith leader network, recently wrote a piece applauding President Obama’s pronouncement. “If we are to live with each other, and in accordance with a God of love, justice, freedom and equality, then we, like our president, must continue to evolve,” said Wiley, who pastors at the Covenant Baptist United Church of Christ in Maryland.

For African-Americans — especially those of evangelical faith — deeply held religious objections to homosexuality has made Obama’s stance more difficult to embrace. An October 2011 Pew Research poll found that 62 percent of African-American Protestants opposed same-sex marriage, while 54 percent of white mainline Protestants supported it.

North Carolina’s constitutional ban on same-sex marriage can be largely attributed to anti-gay marriage efforts made by black church leaders like Reverend Patrick Wooden, who led rallies advocating for the controversial Amendment One. And after President Obama announced his support of same-sex marriage, the Coalition of African American Pastors began gathering signatures on a marriage pledge that has already been signed by more than 1,000 African-American clergy and Christians.

Maryland Delegate Anne Kaiser, who is openly lesbian, represents Montgomery County’s 14th District and believes that number will continue to swell as leaders of the African-American community consistently voice their support for same-sex marriage.

“People get a lot of their advice or insights on different issues … in church, and at these mega churches, some of these pastors will be talking against [marriage equality],” said Kaiser. “But we have civil rights heroes like John Lewis in the Congress who led the freedom march and Julian Bond and now the current president of the NAACP Ben Jealous all speaking out in favor…of marriage equality so there are certainly many civil rights icons from the African-American community who are very supportive of this issue.”

Kaiser contends that many evangelical families will become more comfortable with gay marriage as they begin to speak about the issue with their children.

“The younger generation is far more supportive than middle-aged people or older people, and I know from statistics, for example, that evangelical kids under 25 support marriage equality,” Kaiser said. “I do think that these dinnertime conversations will in a lot of cases be the teenagers and those in their younger 20s asking their parents and their grandparents what the big deal is. So people may be hearing one thing in church, but I think they’re hearing something else, of course from the president and I think from these conversations from the community and at home.”

Some churches, like the Shiloh Baptist Church led by Reverend Lee A. Earl, have chosen not to discuss politics at all. Though the Obama for America campaign has opened an office in the church building in Alexandria, Virginia, Associate Pastor of Fellowship Danielle Bridgeforth maintains that it’s not promoting or opposing President Obama’s reelection or his position on same-sex marriage.

“[That’s] property that we own, but that we’re leasing,” said Bridgeforth. “That’s not a church facility. By us leasing it to them, we’re not making any political statement…they’re paying market price.”

An African-American woman leaving the church on Sunday, who spoke on condition of anonymity, also offered an indifferent opinion of Obama’s endorsement of gay marriage saying, “I think it’s up to the individual [to decide].”

Though many black churches such as the Shiloh Baptist Church remain uninvolved in the national debate on gay marriage, most feel strongly about it—some for it, others against it. But almost all agree that black church leaders and members will not stay home on Election Day.

“We fought. We have a history of blood surrounding our vote, so we’re going to vote. That doesn’t mean we have to support [gay marriage], we can skip that question and we can vote on every other issue on the ballot,” said Evans. “In Maryland, what we are going to do is pull the levy against gay marriage and ignore Mr. Obama. I’m not saying we’re going to vote against Obama, we’re saying that he does not support our stance.”