You are at:Home»Features»Living the Life»Prince George’s County Police Department: Misunderstood Amid Scandal?
Tweet 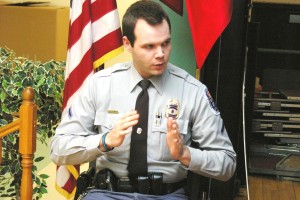 people will do to one another for some of the most petty things imaginable. So it becomes a challenge to realize that’s not the way the world is. Rather then seeing the world where my son is going to be having fun and kittens and puppies, I see a world where my son could face some very real dangers very early on. But in order to survive on the job, you can’t let that get to you,” says Evan Baxter.  Baxter has been a police officer for five years since starting in 2005. He has worked patrol and investigative services for one of the toughest districts and quite possibly one of the most scrutinized police departments in the Washington D.C. metro area – District 3 of Prince George’s County. 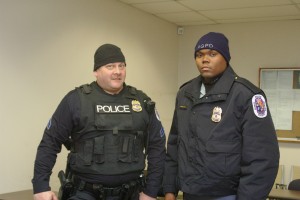 service was sort of in my blood. When the time came to choose, police work just seemed to catch me a little better,” he says. On this grey afternoon, literally days from Christmas, Baxter sits in the department’s auditorium as the American and Prince George’s County flags loom above his head.  “So many of us got into the job to help people, and the way we’ve chosen to help people is by taking bad guys off the street. [We are] a lot of tender people, caring people that are just trying to help out,” he adds.

Prince George’s County has its share of crime ranging from property crimes, including burglary, larceny, and theft, as well as violent crimes spanning from homicides, aggravated assault and robbery to forcible rape.  Within the last month of 2009, 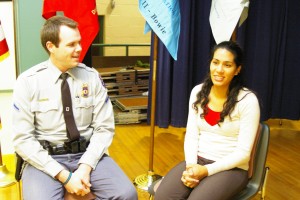 there were 2,292 total property crimes countywide, as well as 416 violent crimes. Officer Baxter asserts that since he’s been a part of the department, violent crimes have steadily decreased.  He stresses that the most prevalent forms of crimes are property crimes, and attributes this partially to the recession. “There are a lot of families out there that are in need and sometimes they just don’t know how to go about getting that — what they need.”  Baxter also argues the following: “The County is very diverse. We’re fortunate in that regard, but it comes with extremely unique challenges. We run from very affluent sections that are right smack next to extremely low-income families. We have a very dense population in a very small space. You put a lot of people in a very small space and friction is bound to occur. We also have a very diverse immigrant population. You put a bunch of cultures together too and there’s bound to be friction, which makes it tough. No one’s perspective is going to line up the same way.”

There are many dangers associated with police work, and Baxter points out that an officer in a marked police car can be recognized by the public and perceived as a source of help. Despite this, he also asserts that they can be a target for retaliations carried out by people who hold a grudge against the police force, a particular cop or even the U.S. government.

“A lot of it (police work) is mundane, but very intense. Little things like getting a call for a domestic situation seems like a very mundane thing; it’s a husband and a wife, and they’re fighting. But they are arguing in a very day to day, mundane way for them, but those things can be so explosive,” says Baxter.  Every situation a police officer encounters can escalate, and that’s why he insists that the biggest danger a cop faces is “apathy” or becoming trapped by a false “sense of security.”

“When you start to feel like you’re safe that’s when you open yourself up to a lot of dangers. They talk about the routine traffic stop; the reality is that there’s no such thing,” says Baxter.  “When you pull someone over, even if it’s for a busted tag light, you don’t honestly know who it is behind the wheel. They could be someone’s grandmother just going to the store or Jeffrey Dahmer, who knows that if you look into who he is, he’s going to jail for life. Situations have the ability to turn from passive to aggressive very quickly. You sort of have to be aware that at any time you might be running into some bad people that don’t want to be caught. You don’t really know what lengths they’re willing to go to to prevent you from doing your job.”

The PG County Police Department is only beginning to recover from its own recently exposed corruption scandal.  In an astounding turn of events, on November 12, 2010, Prince George’s County Executive Jack Johnson was arrested after a four-year FBI investigation.  Federal officials allege that Johnson tried to hide “tens of thousands of dollars of payoffs from a developer.” Johnson’s wife, Leslie Johnson, who was elected to the Prince George’s County Council was also charged. Shortly after the Johnson’s arrest, three county police officers: Sergeant Richard Delabrer, Corporal Chong Chin Kim, and Officer Sinisa Simice were arrested on a string of crimes with charges pertaining to extortion, drugs and guns. Roberto Hylton, the former Chief of Police, stepped down from his post in December. Hylton was with the department for more than 29 years, and according to reports, crime dropped to historically low levels under his watch. However, the department has had its fair share of problems. Recent documents indicate that 46 Prince George’s officers have been suspended or assigned administrative duties due to misconduct or violations.

Officer Baxter does not shy away when asked about the recent corruption scandal. “In many ways, it’s every bit as heartbreaking as a bad seed. Having worked with this department, I know the guys that are here. I know the men and women that work every day, put it on the line, spend the hard over time instead of being with their families to catch the bad guys,” he insists. “One or two guys come along and make some bad choices, and suddenly now rather then seeing it as one or two people making bad choices, it gets painted as systemic in the department. And that’s tough, because it makes our jobs more difficult. People stop trusting us. People stop believing in us and we have to work that much harder to rebuild that trust. Sometimes people make the choices they make, and unfortunately, we’ve had to pay for that.”

Hylton has been replaced by Mark Magaw who had been serving as a deputy chief under Hylton. Magaw has been with the department 27 years and is a former narcotics commander.  “Chief Magaw is making it a very clear point that we are going to be as transparent as we possibly can,” Officer Baxter charges, “because we want to rebuild that trust and to make sure citizens here in PG County know that the good police officers are working for them and that we do have systems in balance to look into these allegations; to search out bad choices being made by police officers and address them.” He also added: “The encounters I’ve had with him [Chief Magaw] have all been uplifting. I think he’s got his head on right. He has a clear vision of what needs to be done and how to handle it.  That’s going to do a lot to get us from where we are to where we need to be.”

Amid all of the shocking developments, Baxter remains positive and focused. He admits that the scandal has obviously affected the department’s moral, but also states: “As soon as the initial shock was over, we all sort of looked at it and said, ‘Well, here it is. This is the situation we’re in now; let’s go fix it.’”  He pauses a moment and then adds: “I think people sometimes believe from watching TV that police are all just out for themselves and we’re all just trying to cover up the mistakes made. The reality is that’s just not true. Most good police officers don’t want to be around bad police officers. We don’t want to cover up mistakes. We want to correct problems. I think most police officers realize it’s time to buckle down and take care of this.”

Officer Baxter has been married for four years, and now has a ten-month old son to think about. “Just talking with my wife about some of her concerns – she worries every night that I go out there that I come home safe. She’s told me that it keeps her up some nights.” He eloquently explains that many officers without spouses or children still have mothers and fathers who worry about them. “I think they [the public]would be surprised to know that we’re people. I’m a person just like them,” he says. “I like to make jokes, laugh, enjoy myself just as much as anybody else. I think the stereo type is that police officers are all very hard, harsh people that just want to punish people, and that’s just not the case. So many of us got into the job to help people. Those were always the highlights of my career – not locking up that really bad guy.  It was always helping someone in a way that was very tangible.”