You are at:Home»Features»Living the Life»Fighting for Aidan: One Mom, One Son and Autism
Tweet

“There was a bit of denial at first,” says Yetta Myrick. “I don’t have any other children to assess him by, so I figured he’d grow on his own. He wasn’t really talking.”  Myrick’s son Aidan, who turns eight in September, has been diagnosed with autism.  She has been fighting to give her son a chance at a happy, normal life since his birth, and that is a daily struggle for the single mom.

The Center for Disease Control and Prevention (CDC) defines Autism Spectrum Disorders (ASD) as a group of developmental disorders characterized by impaired social interactions, impaired verbal and nonverbal communication and behavioral challenges. The CDC estimates that 1 in 110 children in the United States have some form of ASD. Yet a recent study published in the American Journal of Psychiatry found that 1 in 38 children suffer from ASD, suggesting that the disorders are more prevalent than previously thought. 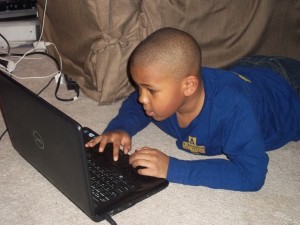 At two and a half, Aidan was diagnosed with a speech delay. “I remember bawling,” Myrick says. “It’s become a bit of a joke now, but I mourn the speech delay more than I mourn the autism.”

Autism Spectrum Disorders can be difficult to diagnose. There is no medical test; instead doctors assess a child’s behavior and development. For years, Myrick could not identify her son’s disorder, despite the warning signs. “Is your child verbal? Do they act as if they don’t hear you, or appear deaf? Are they doing repetitive behaviors? These are some signs,” she asserts. “My son used to line up little cars; things had to be exactly the same way. He’s still a little obsessive now, but he’s not lining up those cars anymore.”

Most experts believe that genes, environment or a combination of the two likely contribute to ASD. Others have claimed a link between childhood vaccinations and autism. Recently, the British Journal of Medicine retracteda study it published in 1998 linking vaccines to autism.  Myrick herself does not believe that vaccines caused Aidan’s autism, but says, “That is not to discredit other parents that do believe it. [Parents] understand how their child was before vaccinations and after.” 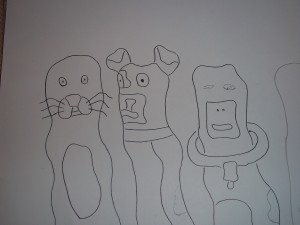 The fact that ASD occur on a spectrum may also contribute to the difficult diagnosis, since they affect each person differently. Generally, ASD are broken down into three categories: Autistic Disorder, Asperger Syndrome and Atypical Autism. “No two people on the spectrum are alike,” Myrick says. “People who have Asperger’s, their language is developed at a normal rate. However, there’s an instance where they might fixate on certain things. They are socially awkward. People who are high-functioning, they have that language delay like people who have classic autism, but they don’t know how to socially interact or necessarily get the social cues.”

When it comes to Aidan, Myrick says, “People think about children sitting in corners rocking, not being engaged. With my son that’s not the case. Aidan will come up and give me a hug. He smiles. He understands when he’s doing something wrong.” 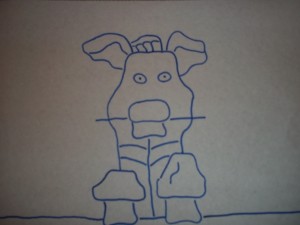 On a rainy day in May, Aidan falls asleep on the ride home from school. Heattends a private school in Baltimore, although the family lives in the District. On most days he rides the bus, but today Myrick has taken him home after a parent-teacher meeting. They drive up to their brick house, which they share with Aidan’s grandparents. Myrick shields her son from the rain with an umbrella as they walk from the car. Still sleepy, he buries his face in the crook of her arm.

Myrick says Aidan has made “tremendous progress” since she petitioned the District of Columbia Public Schools (DCPS) to get him into a different school. The psychologist who diagnosed Aidan’s autism advised that he would thrive in an Applied Behavioral Analysis (ABA) program, used to modify behaviors and teach new skills. “They break things down into steps, so that the child can learn,” Myrick says and adds, “You provide reinforcement for when they do what they’re supposed to do well.”

The new learning environment seemed to be just what Aidan needed. At least until Myrick discovered that the behavior analyst in charge of supervising the ABA program at Aidan’s school had not been supervising his progress at all.

Myrick frowns and says, “Apparently the school system did not pay her for months. I found out at a meeting that she had not been there from September through January.” 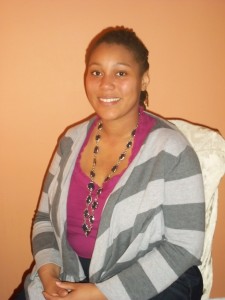 In the wake of harsh criticism from former Mayor Adrian Fenty and former Chancellor Michelle Rhee of the public school system’s poor delivery of special education services, DCPS hired six new ABA coaches for the 2010 – 2011 school year. However, Aidan was granted private placement. Now his school is far from home, but Myrick is positive.  It’s the nurturing environment he needs. She is considering placing Aidan in a nearby public school when he turns six.

The day-to-day challenges Aidan faces are things that most people take for granted. “Tying shoes has been on his IEP [Individual Education Plan] for the last year-and-a-half.” Myrick says. She pauses, “Life can be a challenge, but I always think to myself, is he happy? That’s something that I know. Of the things he’s learned in school, one of his answers is, I am happy. I thank God for that.”

In addition to school, Aidan receives art therapy, occupational therapy and speech therapy.  Myrick says, “My son thrives off of routine. What that means is making sure he takes his vitamins at the same time, goes to bed at a certain time, that we do homework, that he has some free time. To be in a room — the TV, florescent lights, flickering of light, outside influence of lights, conversations – there‘s a lot of stuff for them to sift through,” she explains. Myrick also takes Aidan horseback riding and swimming. “There are a lot of things for him to get input,” she says, “so he can be a lot calmer and more functional in the world.”

Settling down at home, Myrick lets her son just rest on the couch before making him a snack or reviewing his assignments. Aidan’s toys are in a neat pile by the dining room table. A blossoming artist, his drawings are grouped together; some adorn the walls.

“That’s his strength,” Myrick says, looking up. “He likes to draw from his videos. He will freeze the frame and draw what he sees.” Aidan also draws from memory. Myrick refers to Dr. Temple Grandin, a well-known ASD advocate with high-functioning autism, and says, “Her thing is you have to find something that motivates them so that they can create a career out of it. My goal is for him to do something with art.” Recently, Dr. Grandin’s semi-biographical film, “Temple Grandin,” received five Emmy awards. Myrick believes it to be a more accurate depiction of autism than the popular 1988 movie, “Rain Man.”

When asked about autism in popular culture, Myrick says she believes the public is changing in its understanding of the disorder. She partially credits Dr. Grandin, but also mentions “Rain Man.” Myrick says, “Dustin Hoffman’s character was a savant. The majority of people with autism are not savants – that’s something to take into consideration. No two people on the spectrum are alike. So it’s great that we have these examples, but we need to focus as a community on creating more real depictions of what autism is.”

In 2008, Myrick founded the non-profit DC Autism Parents to empower parents who have children with ASD. “My goal is helping with treatment, helping parents learn how to treat their children, how to connect them with people who are treating these children. The whole point is raising their quality of life,” she says.

“In the District,” Myrick continues, “we need to focus on a child-family centered type of care. Families need to be a part of that treatment plan. If you get families on board and hold families accountable, then what starts is a ripple effect. If the child is doing certain things at school and they’re not doing certain things at home, you have that conversation.”

Aidan lies on his stomach and begins to play on his computer. When Myrick asks if he’d like chicken tenders for dinner, he looks up and says, “Nuggets.”

“Our kids look like any other kid,” Myrick says. “It’s just that they act differently. They might not talk; they might flap, walk on their toes, start yelling. They sometimes make noise. It could be your perfume is too much, fluorescent lights in the grocery store, any number of things…I rarely have issues, but Aidan does make his ‘dat-ta-dat’ noises every now and again. People look. I have to ignore you. When he becomes an adult and he’s walking in the community, he has to learn how to adapt to you.  We’re not willing to adapt to him.”

Although raising her son has been an enormous challenge so far, Myrick would not have it any other way. “One of the things I’ve learned from Aidan is to be more patient,” she says. “When he finally does make a huge stride – it could be tying his shoe – the little things are huge. It humbles me.”

Myrick smiles and remarks, “I feel that I love him more because he does have autism. That’s not to say if he was neurotypical I would love him less, but the love is different. There’s always going to be that fight there.”