You are at:Home»COVER VIDEOS»(VIDEO) Meet Iyanla Vanzant: New, transformed and back on top
Tweet

On a rain-stricken evening in the Washington, D.C. suburb of Silver Spring, best-selling author, and inspirational speaker Iyanla Vanzant arrived at Metamorphosis Boutique for the signing of her latest book “Peace from Broken Peaces,” bearing gifts for her audience and wondering aloud how they can drive in such bad traffic on the Washington beltway.

This, of course, was the evolved Vanzant – the antithesis of Ronda Eva Harris, (her birth name) who grew up in a broken abusive home in Brooklyn. She was indeed different tonight.  She was not the Vanzant who would experience a must talked about and painful separation from Oprah Winfrey in 1999.  Nor was she the Vanzant who considered suicide following the death of her daughter, Gemmia, to colon cancer in 2003.

The Vanzant who breezed through the door of Metamorphosis Boutique on this rainy night was the now transformed Vanzant, who rose from despair to become an inspiration to millions. “Peace from Broken Pieces” is a tell-all account of that journey. 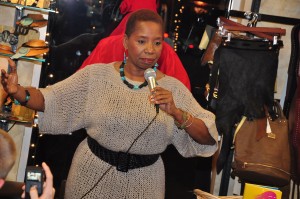 [The book] “is a deeper truth than what I knew before,” Vanzant admitted. “What this book tells you is this is what is broken, this is how it operated, this is where it came from, and this is how to heal it.”

Vanzant spoke of her childhood and her growth from a single mother on welfare to a celebrated inspirational speaker, whose words reached millions of women.

“To be an unwanted, neglected, abused, violated child is not something that gives you… worth in life,” said Vanzant, remembering her brutal childhood.  It was a period when she grew up without a mother, her father was rarely home and she was the victim of rape and maltreatment by other family members. Despite her hardships, Vanzant persevered.

“[Ronda] saved my life,” she said, referring to her former persona. “It was her tenacity, her refusal to be crushed, her ability to do very much with very little, her ability to see the truth, know the truth and not let people talk her out of it that saved me.”

Determined to make something out of her life, Vanzant, who was a 21-year-old mother of three living on welfare, forced herself to attend college and pursue a law degree before finally finding her niche as an inspirational speaker and author in 1988. Ten years later, her talent for speaking and writing eventually landed her on “The Oprah Winfrey Show” in 1998.  She became a frequent s 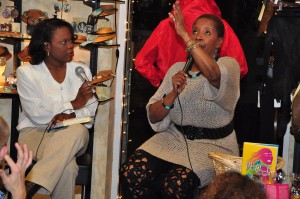 how guest, including stints as guest host, leading the show and speaking directly to the viewers while Winfrey sat with the audience. It was success beyond her imagination.  That success, however, was also short-lived.

Soon after her appearances on the show, Vanzant desired more success and her own show where she could make an even greater impact. The result was a misunderstanding and eventual parting of the ways with Winfrey. According to Vanzant, a once promising relationship was fractured in an instant, and it wasn’t until the final season of Winfrey’s show in February 2011 that Vanzant was invited back on the set to clear the air.

“I don’t think of [Oprah Winfrey] as Oprah Winfrey,” admitted Vanzant. “She is my sister. What it meant to me was to heal a breakdown with my sister. The minute I recognized the error, I called her.  I wrote her, and she called me and we talked about it. That was nine years ago. It just took the nine years for the dust to settle.”  Vanzant can now be seen on “Oprah’s Lifeclass”, a show on Winfrey’s OWN network.

The hardest time in Vanzant’s life came, however, only four years after her departure from show, when in 2002, Vanzant’s daughter was diagnosed with colon cancer. Following her death in 2003, Vanzant’s whole life was turned upside down. Vanzant confessed to slipping into depression.

“A lot of us are thinking of committing suicide,” admitted Vanzant, who wrote in her book that she fought with the idea of suicide after the death of her daughter. “It’s not that we want to die, it’s that we want to end the pain, and we think death is the way out of pain. We just don’t want to hurt anymore, and I just didn’t want to hurt anymore.  And I thought to end that pain was to end my life.” 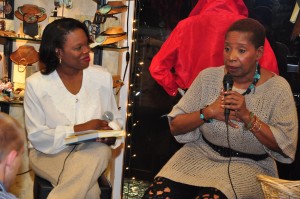 After the loss of her daughter, Vanzant turned to God for answers and a way out of her pain. She couldn’t comprehend how she could save the world, yet watch her child die.

“That was ego,” remembered Vanzant. “I finally said, ‘God, you have to explain this to me. I’ve given you my life, I’ve given you my time, [and]I’ve done everything you’ve asked me to do.”  It wasn’t long before God answered.

She continued, “I couldn’t think myself out of a paper bag, and I was trying to tell God what to do,”

Using her faith for support, Vanzant overcame her depression and focused on devoting her life to continuing Inner Visions, an organization for spiritual development founded by Vanzant and her daughter in 1998. The institute provides workshops, courses and products aimed at creating a spiritual conscious and “embracing a spiritual identity.” 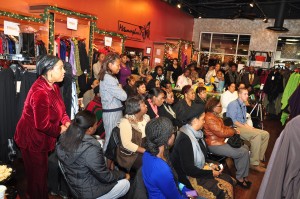 “If you fail to pray, you plan to fail,” warned Vanzant. “You better line up [and]get in alignment with your higher power.  Learn to listen and be obedient and take a cocktail of courage everyday, because you’re going to be called to do some stuff [and]let some stuff go.”