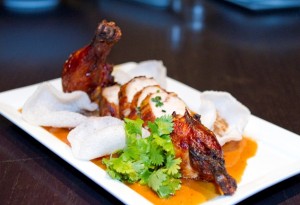 What does yoga and gourmet cooking have in common? Quite a bit, to hear celebrity chef Susur Lee tell it.  “Yoga helps you develop precision,” explains the former Top Chef finalist and founder of Zentan, a chic Thomas Circle bistro in Washington, D.C., specializing in pan-Asian fusion.  “It’s a lot like using a knife.”  If Lee’s firm handshake isn’t enough to betray his commitmentto yoga, the precision he brings to both the flavors and the presentation of his cooking must be proof. Exhibit A: Lee’s Carmelized Black Cod ($26) – carefully sliced into manageable bites, glazed with potent miso mustard, and sprinkled with Cantonese vegetables – displays the sort of harmonious balance that figures to make his yoga instructor proud. 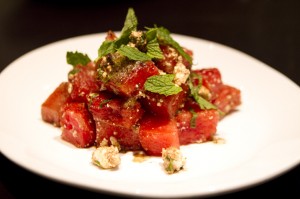 Any sense of intimidation that may potentially have come with the words “yoga,” “fusion,”and “precision,” (for that matter, “Top Chef finalist”) quickly disappears after meeting the man. Wild black ponytail aside, Lee is an unabashed family man, who met his wife, the designer of much of Zentan’s interior and exterior art, when they were both working for a restaurant in The Thompson, Toronto’s five star hotel. He is now the father of three and, to his apparent surprise, the owner of two Yorkies. (Arriving home after a late shift, he once accidentally sampled their food, having confused it for chicken jerky. His verdict: “Not terrible.”) Between his family and his business, Lee, a Hong Kong native, stays plenty busy.  He currently runs restaurants in Toronto, New York and D.C.  He calls Toronto home, but visits the Hill maybe five times a year. He has traveled the world and sampled some of the oddest dishes imaginable. “Camel,” he says, “tastes like pork.” And fried worms? “Anything fried tastes good.” For one memorable dinner in Singapore, he was asked to prepare alligator jelly, the substance found between the joints of alligator bones. 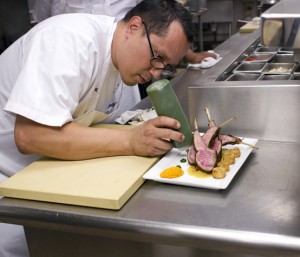 You won’t find anything this outlandish among the offerings at Zentan. While the menu features geographically diverse flavors that cover all of Asia and parts of North America, it eschews culinary gimmicks in favor of chicken, steak, lamb, pork, and of course, heaps of sushi. In other words, those expecting alligator jelly should consider looking elsewhere. Lee, along with Executive Chef Jaime Montes de Oca, a holdover from Lee’s highly acclaimed New York restaurant, Shang, makes a conscious effort tosteer clear of dishes that are all flash and no substance. “I’m not conservative,” he explains, “I just enjoy food of great quality.” 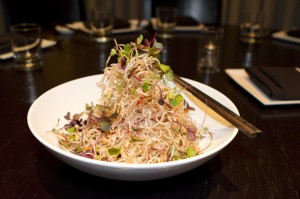 Lee’s signature appetizer, the nineteen-ingredient Singapore Slaw ($16), is a flashy start to any meal: a veritable mountain of the fresh herbs, julienned vegetables and other miscellany. The mish-mash of carrots, cucumbers, ginger,sprouts, cilantro and taro (to name just a few) arrives in the shape of a tower, only to be flattened and tossed by a server. The result is a rich blend of textures and flavors that manages to defy the potential gustatory chaos that comes with mixing this many ingredients. The Beef Carpaccio ($15) is actually five mini circles of wafer-thin beef, each topped with their own dollop of pickled vegetable relish and a wedge of avocado. The whole thing is covered by a delicate veil of crispy rice for a summery dish. For a slightly heartier appetizer, see the Almond Crusted Lobster and Shrimp Dumpling Lettuce Wrap ($13): three plump wraps, each bulging with juicy shrimp. 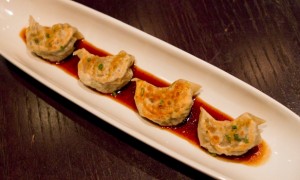 Crispy Garlic Chicken ($24), another signature dish and the top seller in the entrée section, represents Lee’s ability to transform traditional Chinese standbys into new innovations. The entire chicken, served in five tender pieces, has the crispy skin you might expect from a Peking Duck, heavily glazed with a sweet pineapple black pepper sauce. The five meaty shanks Mongolian Lamb ($34) are bathed luxuriously in a deep orange sauce of cumin, ginger and tomato.

Sushi Chef Jason Zheng keeps up his end of the bargain with fresh, creative rolls and sashimi that never breaks too far away from tradition. The busy Rainbow Roll (crab, salmon, and tuna yellowtail) is one of several winners. 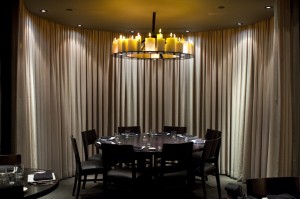 The dining room’s dark and exotic interior exudes Lee’s worldliness and style, while managing to maintain some of his warmth as well. While Zentan seems related to the sort of ultra chic sushi “nightclubs” that have popped up lately all over town, the minimalist space with its black paneling and its several secretive tables tucked away in corners of the dining room carries itself with more dignity and reserve. Any guy taking a date to Zentan for the first time will easily appear to be an international man of mystery as he enters the doors, but he may have a ways to go before catching up to Susur Lee in that department. 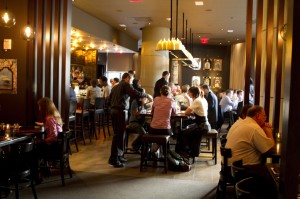