You are at:Home»Features»Bon Appetit»Eatonville: Soulful food as tasty as Hurston’s words are eloquent
Tweet 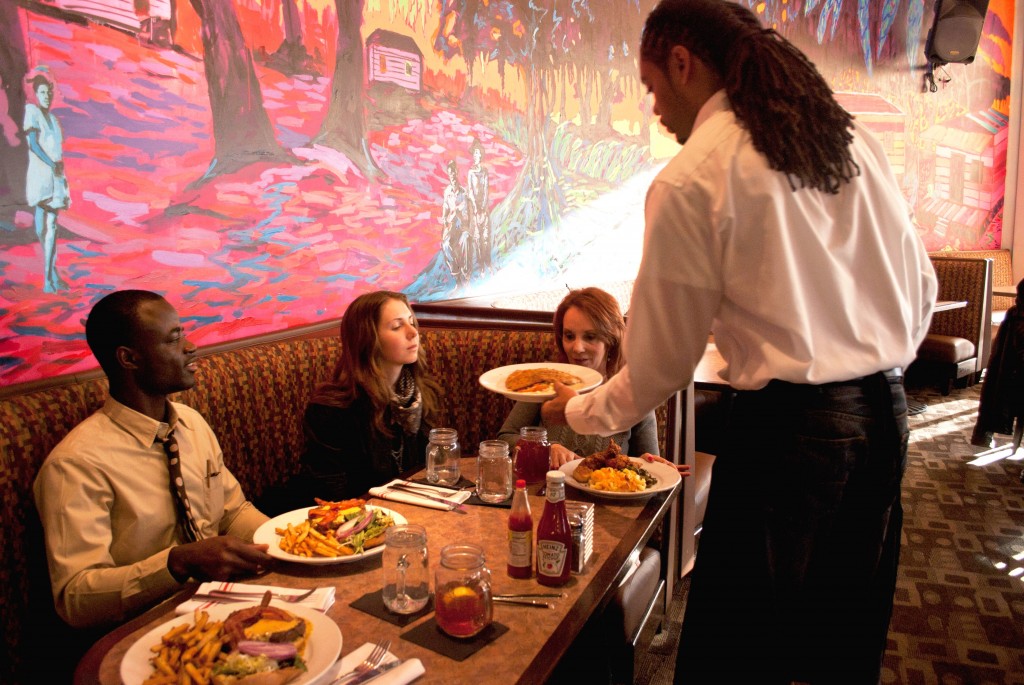 As unlikely as a Zora Neale Hurston themed restaurant sounds, I have to approve of any restaurant that derives its inspiration from a great writer – especially a writer who fetishized food as much as Hurston did in her work. This is the author, who in her most famous novel, Their Eyes Were Watching God, places her maturing protagonist underneath a pear tree, where she undergoes an awakening that has to do with — let’s just say — a lot more than pears.

At Eatonville, the literary connection as well as the cuisine is authentic.  The restaurant began serving its menu of mostly Soul food just north of U Street less than two years ago. Both the space and the food attempt to embody the writer’s prodigious imagination, as well as project a sense of her idyllic southern childhood. The name is derived from the town in Orange County, Florida where the writer was raised. One of the first all-black towns to be established after the Civil War, Eatonville afforded Hurston the opportunity to experience a childhood isolated from the racial tensions that plagued other parts of the country around the turn of the twentieth century. 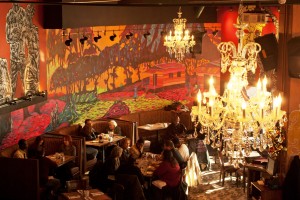 Hurston spent her formative years — in her words — “wrapped in rainbows.” The phrase would later serve as both the title of her biography written by Valerie Boyd and the mural that adorns the restaurant’s far wall. As if the pungent barbecue aroma and festive sight of the racially diverse, energetic crowd aren’tenough, the mural — depicting an exultant young Hurston, mouth agape within a swirl of comets and glitter — is liable to make even the most staid diner feel “wrapped in rainbows.”

Within its hip gallery space, Eatonville strives to produce the hospitable vibe of a friendly neighborhood hangout. “We don’t consider ourselves just a restaurant,” explains Michael Woods, the general manager. “We use this space as a platform to connect with our community.” 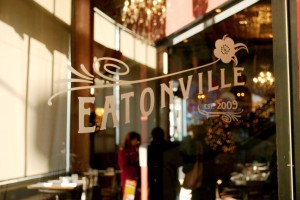 Eatonville is one of many DC restaurants devoted to the recent city-wide trend of prohibition-era cocktails. Theseinclude a fruity New Orleans Sidecar ($10) and a particularly crisp Mint Julep ($8), a drink that must be served by any soul food place worth its salt. A highlight of the drink menu is the Georgia Peach ($8), billed by the server as the most refreshing cocktail around. Made with a clear peach corn whiskey and served in a mason jar — as are many of these cocktails — this bright, sweet concoction seems purposely designed to evoke the pitcher of lemonade your mother used to bring you on the porch, during the summertime. Such memories ring true whether or not you actually had this experience. Eatonville also makes a commitment to domestic micro-brews over the usual standards you expect to find on tap. Abita, brewed in Covington, Louisiana, is always on tap and a good complement to any of the southern fare.

With a menu that features mussels and roasted duck breast, Eatonville is not exclusively about Soul food. However, when in doubt, the rule for ordering is: The more southern, the better. The gumbo ($8), which has already been lauded by patrons and the press, lives up to its reputation as some of the best in the DC area. The sweet, thick brown broth is completely saturated with white rice, bits of spicy andouille sausage, shrimp, crab and twigs of meaty fried okra. For diners who are sensitive to spicy flavors, the She-crab Soup ($8), which cycles on and off of the menu, is a warm and hearty alternative. 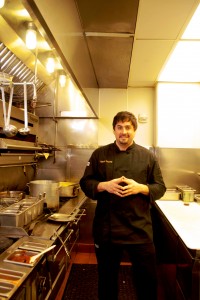 Diners might not expect much from the salad section of a menu that focuses so heavily on such rich food, but the Buttermilk & Bacon Salad ($10) offers a fresh change of pace. Buttery toasted croissant croutons give the otherwise light salad real body, and the surprisingly light buttermilk dressing keeps the dish true to its southern roots.

Of course, salads and soups – as tasty as they are – provide just a prelude to the main event. The southern signature dishes, namely the Fried Chicken ($15) and the Catfish & Grits ($16), rule the day. The moist flavors of both the chicken and the fish are protected by a layer of well-seasoned breading. Of course, a key consideration when ordering any dish on the menu is the side dishes. Fortunately, the two standout entrees are accompanied by two standout sides: Extra-sharp Mac and Cheese and Jalapeno-Cheddar Heirloom Grits (each $4 as solo side dishes). Jalapeno in the grits is a particularly nice surprise, giving the creamy dish an extra punch.

Eatonville doesn’t have a printed dessert menu, but the server was happy to recite the offerings. Both the Bourbon-soaked Raisin Bread Pudding and the Pear Crisp (each $7) are gooey treats – especially once they run together with the scoop of vanilla ice cream on top. Eating the latter, generously heaped with chunks of bosc pear, one is reminded of Ms. Hurston’s pear tree. Eatonville’s pear crisp may not be the perfect moment in nature that Janie experiences underneath the tree in Their Eyes, but it’s awfully close.