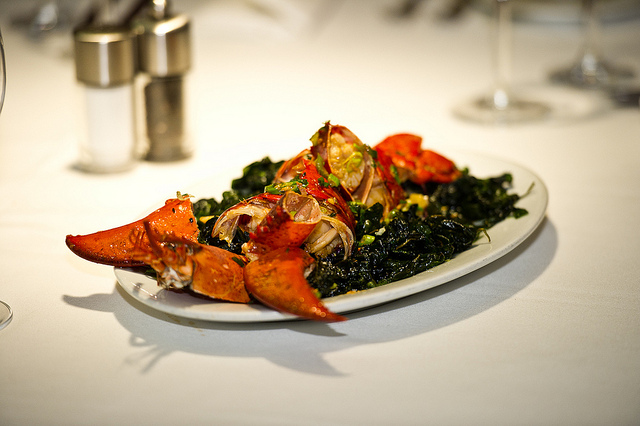 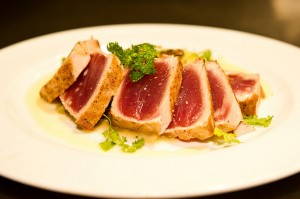 The dining room at DC Coast, with its wall-length mirrors and its over sized benches, seems to have been modeled for agiant.  Who else would order one of the industrial size bottles of champagne located high up on a shelf next to the open kitchen?  Giants, in fact, seem to pervade the atmosphere, from images of the Lincoln and Jefferson Memorials carved into glass candle-holders on each table to the voices of Ella and Sinatra in background.  The music weaves in and out between the tables of K Street lobbyists and out-of-towners fresh from their White House tours.  Underneath the two-story Art Deco columns, casual dining is impossibility.  If Cary Grant and Katherine Hepburn were to suddenly show up for a weekend in the District and ask for a dinner recommendation, steer them in the direction of DC Coast without hesitation. 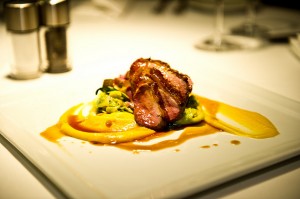 The more local giants who frequent DC Coast come with big appetites for big flavors.  With a background in classic French and Italian cuisine, executive Chef Brendan Cox has created a menu full of time-honored tastes that pair well with the opulent hall.  “My favorite dishes are all old-school French cuisine,” he admits, but he is quick to add that at DC Coast, he strives for something “lighter and more modern.” 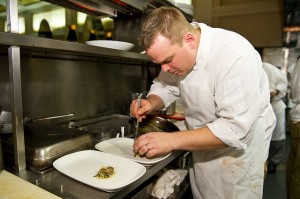 As the name implies, DC Coast specializes in seafood, which is just fine for Chef Cox. The opportunity to show off hisversatility is, he says, the biggest advantage of the seafood-heavy menu. “You can pull from divergent influences without being all over the place,” says Cox, alluding to a kitchen that is just as comfortable churning out Chinese Style Smoked Lobster as it is preparing precise dabs of foie gras. One of the exciting challenges for Cox is pairing the right side dish with the right fish. He concedes a love of steak; the Grilled Ribeye is, in its own right, a hot item on the menu.  Yet he believes seafood affords a chef  a greater chance for creativity.  He states:  “With steak, once you’ve had mushroom, spinach, potato, what else do you really want?” 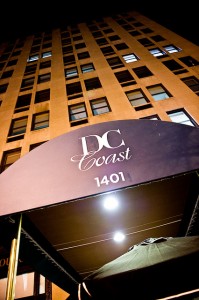 On the appetizer section of the menu, the perfectly seared Day Boat Scallops ($15), served with parsnip, youngspinach and porcini jus, are a great introduction to the restaurant’s strongest suit.  One of the kitchen’s lesser known strengths is its pasta, all of which is made from scratch onsite.  Sweet Potato Panzotti ($11), a stuffed pasta served with sage, guanciale (cured pork), and a generous sprinkling of toasted hazelnuts, showcases Cox’s apparent predilection for rich, creamy sauces.

Understandably, Cox claims to have trouble picking a favorite amongst his menu’s seven regular seafood entrees.  But he does make special mention of the Potato Crusted Fluke ($24), an underrated member of the flounder family, which he calls, “One of the most local fish you can get.”  Wrapped in a fluffy potato crepe, the mild fish is able to absorb a thick carrot-bergamot jus infused with the unlikely ingredient of Earl Grey tea. Braised vegetables, another concoction from Cox’s French influence, appear throughout DC Coast’s menu and are at their most effective when served alongside the Yellow Fin Tuna ($26). Here, a mix of leek and Maitake mushrooms complement small chucks of tuna, crusted white on the outside and vibrantly red in the center. A tender 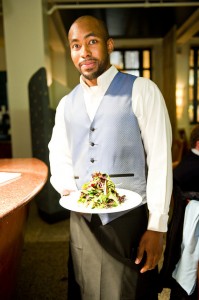 Long Island Duck Breast ($28) with sweet potato-apple puree is a solid option for the rare seafood non-enthusiast who somehow finds himself dining at DC Coast.

While dessert at DC Coast can be hit or miss, its hits are not to be missed.  The Apple Charlotte ($8) with its simultaneously chewy-crispy shell, its drizzle of caramel and its dollop of cinnamon ice cream is a dessert that truly has all of its taste and texture bases covered. As dependable as the fish is, it is the Charlotte that is most likely to inspire the loudest accolades after the meal. The visually impressive Campire Smores ($8), which features cascades of toasted marshmallow atop a mammoth block of chocolate semifreddo is strictly for die-hard chocoholics.

In terms of both its cuisine and its ambiance, DC Coast is a restaurant that manages to stay true to its roots without being stuck in the past.  Drinking a K Street Martini (Ciroc Vodka, White Grape Juice), gazing across the street at the neo-classical Hamilton hotel and listening to a Rat Pack crooner can make your average couple from the suburbs feel like royalty from an earlier generation – but if a big slab of salmon is part of the expectation, they won’t find it here.  A bite of the Tahitian Style Tuna Tartare or the Black Grouper with glazed fingerlings is enough to keep even the most conservative diner firmly grounded in 2011.  The giants of DC’s past haven’t died out after all; they have just developed more sophisticated palates.