You are at:Home»Featured»BON APPETIT – Met Bethesda: Luscious lobster and martinis in an unlikely place
Tweet 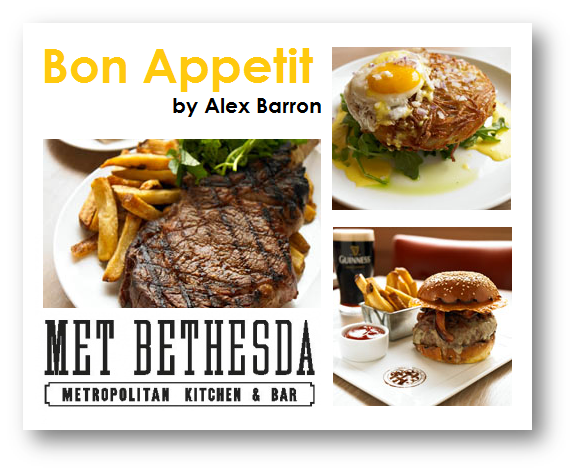 It seems like common knowledge that you go to the mall for a pair of jeans and some food court fried rice – not for lobster and a martini. But Met Bethesda — which opened just over six months ago in the Montgomery Mall, just across from the movie theater — asks shoppers to drop their preconceived notions. With its casually classy, wood-paneled interior, as well as its open kitchen and 40-seat central bar, this Boston import, the only one of five “Met” restaurants not located in Massachusetts, immediately announces that its aspirations are higher than those of most mall restaurants. It doesn’t hurt that the Montgomery Mall itself shares its ambitions. Earlier this year, it unveiled its newly refurbished food court – sorry, its Dining Terrace – a sleek and shiny space with wide concourses and natural light flooding in from skylights above.

General Manager Susan Spiwak acknowledges that because of its location — replete with a view of the parking lot — serious foodies might be slow to take Met Bethesda seriously. “The challenge is getting people across the threshold,” she admits. “But once they’re in, I know we can hook them.” Met Bethesda has several tricks up its sleeve that have already helped it to garner a devoted following. The most prominent and original of these is the Martini Bar at the epicenter, which is comprised of a line of sixteen vertical cylinders, each containing a brightly colored fruit puree. Fruit flavors range from the ordinary (strawberry) to the exotic (prickly pear), and mixing them with various liquors to find the best possible combination is great fun for bartenders and patrons alike. One of the best is the Blood Orange Martini ($11), which is bright and sweet without being cloying. Some of the purees tend to reappear in house cocktails, as well as seasonal desserts.

Various promotions (Monday Night Meatball Bar, Taco Tuesday) have already helped Met Bethesda to generate buzz. Beginning in June and lasting through the summer, Lobster Wednesday figures to be a major draw. The $24.99 price includes two lobsters, served in one of four different dishes: steamed or grilled twin lobsters, lobster roll, fra diavolo or mac and cheese. Traditionalists may prefer the first of these options: a classic New England arrangement that features both lobsters still in their (pre-cracked) shells, sitting in a big steal pot with buttery potatoes and corn on the cob. But the most original, and perhaps most satisfying, is the fra diavolo, an original concocted by Chef de Cuisine Andrew Kern. (Apparently, the recipe was a favorite of the Saudi Arabian ambassador, Kern’s former employer.) Big, thick strands of pasta conceal a mountain of hearty lobster meat, and the dish is saturated with a pungent red peppery sauce.

Although standard bar fare is available, the kitchen tends not to be satisfied with basic preparations: the Crispy Calamari ($12), for example, is breaded in coconut and accompanied with jalapeno peppers. The “Char Bar,” an assortment of small bites, roasted over a hickory and oak flame, is another inspired touch. Pieces of Brown Sugar Beef ($8) are pleasantly sweet and crispy, and Salmon Belly ($6), served atop a torched tomato, is moist and flavorful. The Modern Caesar Salad ($12), highlighted by a zesty cayenne pepper dressing, is an unexpected winner as well.

Although Met Bethesda has many dishes in common with its Massachusetts siblings, Kern (a local Montgomery County boy who paid his dues at Marcel’s, Sasso (now closed) and several notable Manhattan restaurants) is allowed a fair amount of autonomy over his kitchen. He and his management are determined to make Met Bethesda into more than a generic mall restaurant, and so far their mission seems to be paying off. It’s already safe to say that there’s no longer any need for Date Night in Bethesda that involve navigating that notorious Wisconsin Avenue traffic.