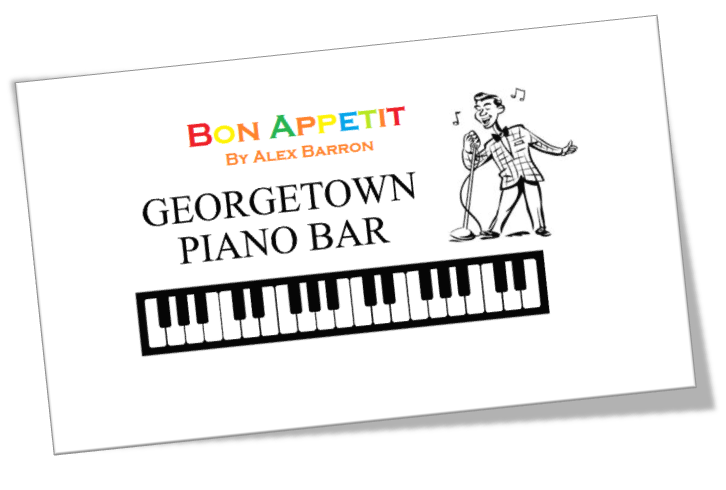 It was a sad day in Georgetown earlier this year when Mr. Smith’s, a popular piano bar that had operated for nearly forty years in an elegant — if faded — Victorian space on M Street, announced its closing. Even as a glut of posh nightclubs opened around the neighborhood and throughout the District, the throwback concept of a piano bar seemed to appeal to all ages.  On weekend nights, the piano at Mr. Smith’s was surrounded by patrons young and old, belting out the words to everything from Sinatra to Coldplay. Once the local institution made its plans clear, it didn’t take long for a group of investors to start making plans to fill what was certain to be a gaping void. Bill Thoet, a vice president at Booz Allen Hamilton, spearheaded a group that included several former Mr. Smith’s employees in an effort to open a new venue, named simply, Georgetown Piano Bar. Mr. Smith’s has since decided to remain in business — it recently reopened a few blocks south on K Street, where it has replaced Chadwick’s, another old neighborhood favorite. But Washingtonians are so enamored by the piano bar; there just might be room enough for two in the same neighborhood.

One glance at the brand new Georgetown Piano Bar, which opened its doors to the public in September, affirms that this is not just a Mr. Smith’s knock-off. Its home is a space below street level that formerly housed Modern nightclub. Management has vastly toned down the décor, which used to be sparkly and garish, but it has salvaged the circular bar located at the center of the room. The best seat in the house, however, might be at the piano itself, or more accurately, the red wooden stand that encases three electric keyboards and doubles as a table. The lucky five or six who occupy these stools have the best vantage point for joining in the nightly sing-alongs and perhaps, for requesting their own favorite tunes. Requests are technically free, although a large fishbowl-like tip jar strongly hints at the proper protocol.

At the other end of the room, leather sofas are arranged to make private booths — a holdover from the bar’s days as a club. (A laser light show, which emanates from the piano during lively, crowd-pleasing tunes like “Livin’ on a Prayer” is another one of the bar’s few glam indulgences.) But the walls are lined with framed pictures of famous figures like Dean Martin, Duke Ellington, John Kennedy and others whose classic aura the owners seem to want to borrow. The cocktails — which are slight variations on standard recipes — each have a celebrity namesake.  The Willie Nelson is a Moscow Mule with lemon juice and mint.  Their take on a Godfather (scotch and amaretto) is dubbed a James Brown and so forth. The selection of beer and wine is adequate; nothing, not even a Bud Light, costs less than $5, but prices like these are not necessarily unusual in Georgetown. Whereas Mr. Smith’s has always had a full kitchen, Georgetown Piano Bar serves no food, although management allows and even encourages patrons to bring their own. Delivery partnerships with several area restaurants may be in the works.

For now, the lack of food only serves to draw more attention to the music. The pianists are unfazed when fans saunter up to the piano to thumb through binders full of the standards, and their energy level seems to pick up a notch when they launch into “Sweet Caroline” or any other anthem guaranteed to make the whole room burst into song.

Whether or not Georgetown can sustain two piano bars remains to be seen, although given the flocks of Mr. Smith’s fans, it seems that an ample fan base already exists. Regardless, places like these two have all but rendered the karaoke bar extinct. Why would anyone want to bother with a computer and a microphone when they can have a piano?