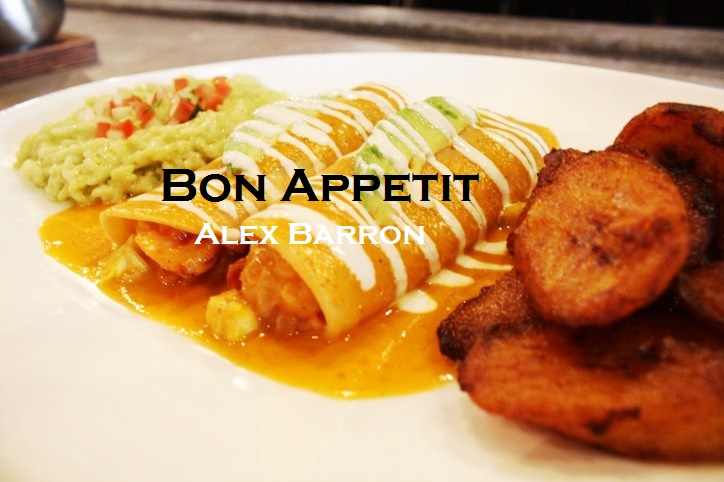 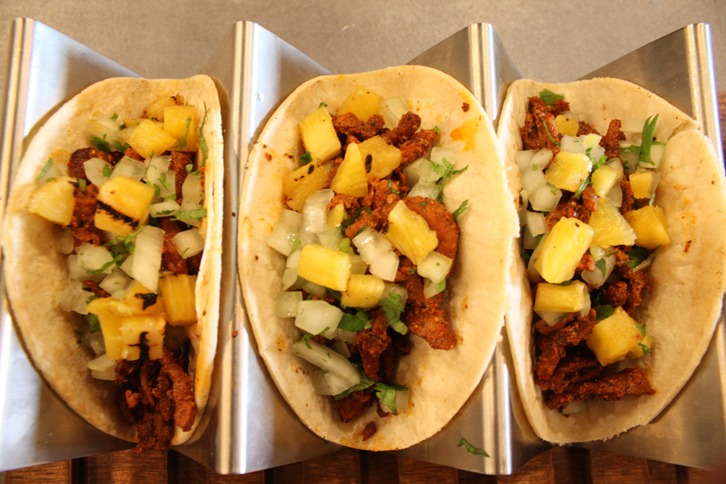 It’s getting harder and harder to find bad Mexican food in D.C. Those gloppy enchiladas and re-fried beans that provided many of us with an early introduction to it are becoming increasingly scarce – and that’s a good thing. These days, such substandard fare just won’t cut it, especially in sophisticated Georgetown, home to restaurateur Richard Sandoval’s newest District outpost.  Many Georgetown regulars were disappointed by the closing of Third Edition, a longtime local watering hole. But Sandoval’s El Centro D.F., which occupies the vacancy left by Third Edition, has already proven a worthy successor, delivering high-end tacos and other Mexican favorites, while offering a pleasant rooftop deck, particularly appealing for after-dinner drinks. 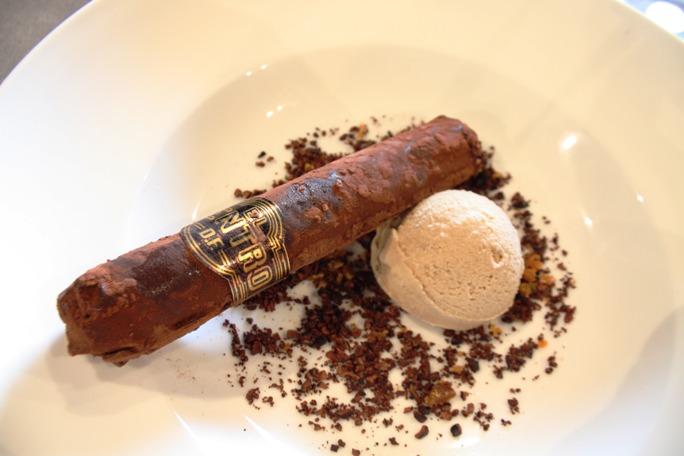 Sandoval has already made a name for himself in D.C.; both Masa 14 and El Centro’s other branches (its original location), continue to thrive on 14th, as does Zengo in Gallery Place. Masa 14 and Zengo offer creative fusion of Latin and Asian cuisine, but for both El Centros – which offer largely the same dishes – Sandoval sticks mostly to his Mexican heritage. The “D.F.” in the restaurant’s name stands for “Distrito Federal,” an alias for Sandoval’s native Mexico City, but the initialsdouble as a nod to D.C. itself.

The interior here is dark and minimalistic, with wood tables and paneling that evoke a country farmhouse. But the simple interior belies the overwhelming drink selection. What Russia House is to Vodka, El Centro is to Tequila  The bar serves over 200 brands. Predictably, margaritas are a 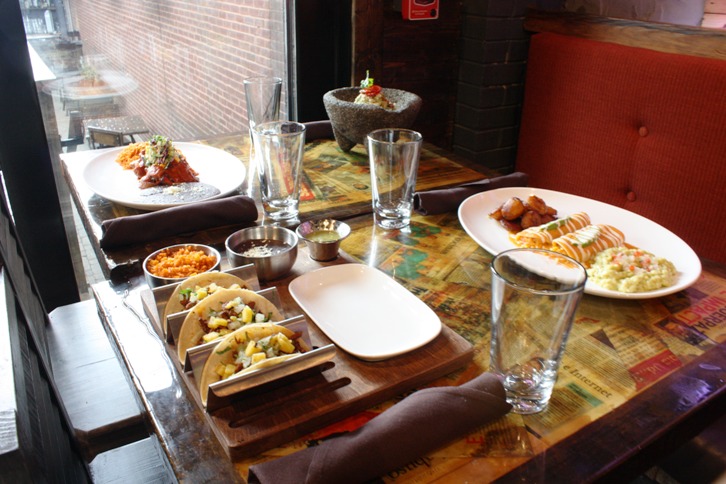 hot seller; selections range from the standard El Centro variety to more creative options like the Prickly Pear ($12) and a tangy, spicy Mango ($12). Some might be tempted to fill up on thick tortilla chips, which are about three times the width of the average Tostito, and the smoky salsa or the citrus-spiked guacamole mixed in a stone bowl directly at the table. The refreshing ceviche ($10.95), generously dotted with juicy shrimp and crunchy taco strips, also makes a solid starter.

But the stars of the show are the tacos, which come three to a serving. Choosing between tacos is likely the most difficult challenge of the evening. Standards like Grilled Steak, Chicken Tinga and Al Pastor (pork shoulder) are all pungent, reliable choices. But more interesting options like the Roasted Octopus ($14.95), dusted with a smoky barbecue rub, and the 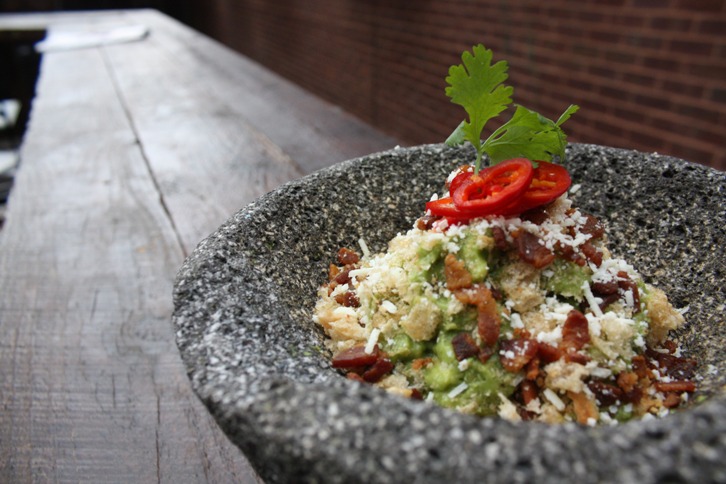 Kalbi ($13.95), a reprisal of Sandoval’s Latin-Asian style that features Korean short ribs and kimchee, display the true extent of the chef’s creativity. Not to be overshadowed are the re-fried beans and Mexican rice which, far from the afterthought side dishes so often found at lesser Mexican places, are flavorful meals unto themselves. Cazuelas, described by the menu as “traditional Mexican braises,” are obscure compared to the more familiar enchiladas and fajitas, but are worth an order. The Beef Short Rib Cazuela ($16.95) is a small mountain of succulent meat and creamy root vegetables, smothered in a zesty green mole sauce and sprinkled with crispy roasted pumpkin seeds.

Dessert, so often overlooked at Mexican restaurants, should be a priority here. The Chocolate Cigar ($6), served in an actual cigar box, is an 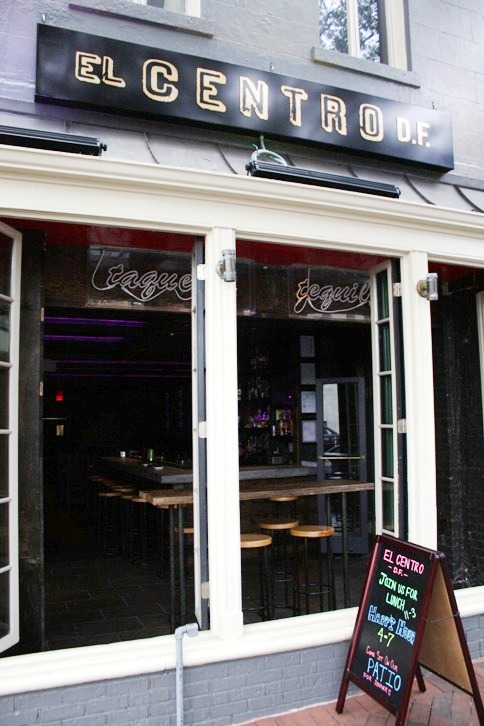 inspired mix of chocolate mousse and hazelnut chocolate cake, wrapped in an “El Centro” label for the sake of authenticity. The luscious Banana Tres Leches Cake ($6) is another winner. At $6 apiece for generously priced helpings, this is one of the better dessert deals in town.

Replacing a neighborhood institution is no easy task, but El Centro D.F. is already ingratiating itself to the locals with a popular happy hour, marked by daily specials: Nacho Mondays, Taco Tuesdays and $5 Margarita Wednesdays. On a bar-filled stretch of Wisconsin Avenue, the late-night menu, which features $6 burritos and two tacos for $6, is sure to gather plenty of interest as well. Deals like these mean that in spite of its label as a high-end Mexican restaurant, El Centro is accessible to the masses. Washingtonians simply have no reason to settle for the likes of Taco Bell any longer.