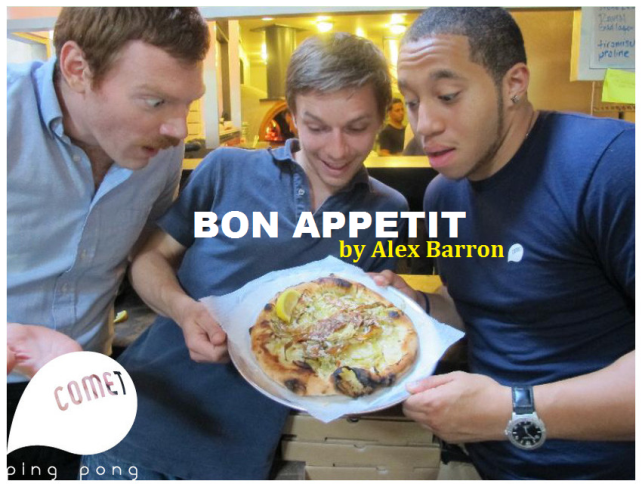 Who could have predicted in 2006, when Comet Ping Pong first opened, that within a few years it would grow into nothing less than a cultural phenomenon?  Its founders, restaurateurs James Alefantis and Carole Greenwood, only decided to open it when a Thai restaurant next door to their upscale restaurant (Buck’s Fishing and Camping) closed, creating an unexpected vacancy. The concept – brick oven pizza in front and ping pong tables in back – seemed simple and unpretentious. At the time of its opening, some denizens of its quiet, upscale neighborhood in Northwest D.C. worried that it was perhaps even too lowbrow – that it threatened to transform the area into a new Adams Morgan, complete with the debauchery and occasional violence that mark that neighborhood’s reputation.

Something else happened instead.  Rather than becoming Adams Morgan, the stretch of Connecticut Avenue just south of Nebraska became a fashionable hub of intellectual counter-culture. Both Comet Ping Pong and Buck’s now enjoy a symbiotic relationship with their famous neighbor, Politics and Prose, a book store that hosts classes, book club meetings and literary speakers. Before and after all events, it’s not uncommon to find big crowds at the adjacent restaurants, which have become ideal spots for a pre-or post-reading drinks and snacks. Of course, location helps, but Comet Ping Pong wouldn’t have built up their following if it were not as good at what it does.

The impeccably designed interior, with its exposed concrete, metal, and large paintings covering some of the back walls, has the look of a trendy modern art gallery. The sounds of pinging and ponging emanate from tables in the back, where matches are ongoing.  Even the dining tables themselves have been painted green with a white stripe down the middle. Comet Ping Pong is also a premiere venue for up-and-coming local bands;  its concert schedule is packed for months and a youngish, hipster crowd flocks to the small stage in back. 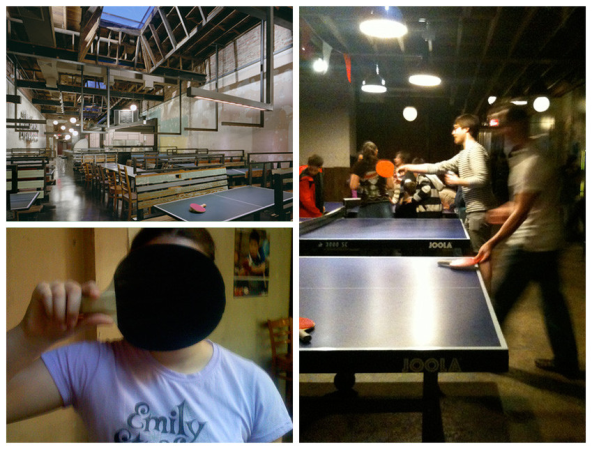 Of course, this unassuming spot – with the vintage sign right out of a 1960s sci-fi movie – is a success because of its superlative pizza. The crusts are grilled – in large brick domes in the back – to slightly charred, but still chewy perfection. The kitchen offers up at least fourteen original varieties, not including the “make your own pizza” option.  This allows patrons to choose from such relatively exotic toppings as Merguez Sausage, La Quercia Prosciutto and roasted pork.  Among the standouts on the list of house specialties is the Yalie ($15), a nod to New Haven style pizza that consists of a well-seasoned and garlicky combination of clams, melted onions and parmesan. The cheesy Philly Calzone pizza ($14), topped with juicy roasted pork and pleasantly bitter broccoli rabe does justice to its inspirations, the classic Philly sandwiches found a few hours up Interstate 95 at institutions like John’s Roast Pork and Tony Luke’s. Comet’s hot wings ($6), meaty and piquant without numbing the tastebuds, have also developed their own cult following.

The list of beers and wines on tap is more proof that Comet Ping Pong tries harder than the average neighborhood pizzeria. On a recent visit, the taps featured offerings as diverse as Bells Kalamazoo Stout and Schloss Eggenberg, a rare lager from Austria. The desserts are similarly ambitious.  The moist and creamy tiramisu, described on the menu as the BEST EVER, almost lives up to its billing, and at $6 for a generous piece, its price makes it a relative bargain.

Although located on Connecticut Avenue, the shopping strip shared by Comet, Buck’s and Politics & Prose is not Metro accessible – at least not without a long walk.  It took time for the area to catch on as its own destination. But the long lines for weekend dinner are proof that after eight consistent years, Comet Ping Pong, once dismissed by some as “too out of the way” has firmly established itself at the center of its own scene.