You are at:Home»Features»Bon Appetit»Agora Restaurant: The succulent tastes of the Mediterranean
Tweet 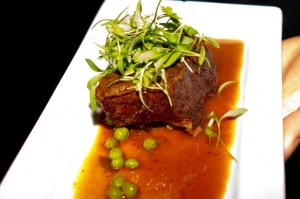 It is a widely accepted fact that Jose Andres, the reigning recipient of the prestigious James Beard award, is to DC’s tapas scene what Marco Polo was to Venice’s pasta scene. When Andres opened Penn Quarter’s enduringly popular Spanish tapas restaurant Jaleo in 1993, some questionedwhether a menu specializing in small dishes could possibly survive alongside the assortment of steakhouses and supper clubs that dominated the area. Nearly twenty years later, Jaleo thrives at three different locations inside the beltway, and small dishes have proven exceedingly popular:Andres’ other tapas-style restaurants – Zatinya (Greek) and Oyamel (Mexican) – have both appeared on Washingtonian’s Top 100 Restaurant List in recent years. Needless to say, living up to the precedent of tapas-style restaurants initiated by Andres is a daunting challenge for a D.C. establishment. Nevertheless, Dupont Circle’s Agora, which serves Turkish small dishes on a fashionable stretch of 17th Street, is worthy of being mentioned in the same breath as any of the more renowned Andres vehicles. 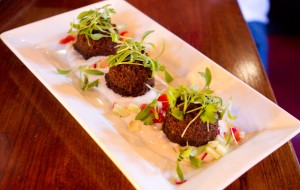 To General Manager Ismail Uslu, one of a handful of Turkish staff members, small dishes make good sense, especially for diners who might be less accustomed to Turkish cuisine. “Usually [when]you order an entree, you don’t get to try much,” he explains, whereas with smaller dishes “you get to taste a bunch of different things. I wish we could do a tasting menu for everyone who came in.” Indeed, the affable wait staff recommends three or four selections per person (though with small dishes, sharing is half the fun), and will help newbies to navigate the menu, while tactfully offering a hand with tricky Turkish pronunciations. (“It took me months to figure out how to say things the right way,” one waitress chirps.) 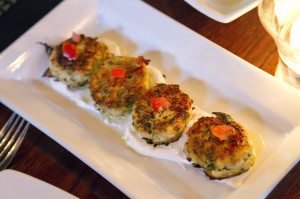 Pita bread must be the base of any Mediterranean meal, and Agora’s version is crisp and light, but the most versatile ingredient on the menu is yogurt, which appears repeatedly in various guises. Cautious diners may be inclined to begin with the familiar Humus ($6), but a better summer option might be Cacik ($7), a refreshing dollop of yogurt, radiating with fresh dill and cucumber.

Mucver ($6.5), or Zucchini Cakes, are served four to a plate on a bed of manchego cheese and are hearty enough to be mistaken for crab cakes by the average Chesapeake Bay area resident. A colorful Beet Salad ($7) pairs blood purple slices of beet with succulent sections of orange, atop a bed of airy lemon mashed potatoes, creating the most colorful item on the menu. 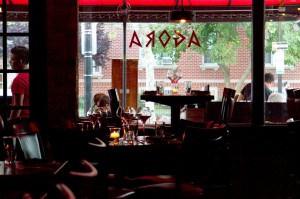 Heartier fare includes the Scallops ($10), perfectly seared, glazed with tamarind molasses, and complemented by saffron yogurt. Manti ($9), tiny beef ravioli, are a familiar, yet uniquely Turkish dish. Here they are smothered in both garlic yogurt and a potent red pepper sauce. One of the true highlights is the Hunkar Begendi ($11), a braised lamb shank tender enough to eat with a spoon. Agora’s take on this Turkish classic, whose rough translation is “Sultan’s Delight”, mixes the meat with a sauce of eggplant and gruyere, performing a spot-on impression of luscious mashed potatoes.

For dessert, Kayadif ($6), a creamy pastry, layered with shredded phylo and custard, drenched in honey and drizzled with pistachio, combines some of the best sweet tastes the Mediterranean region has to offer. 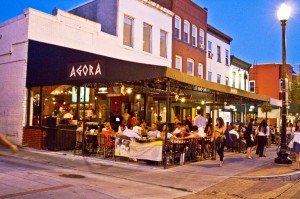 After dinner, Uslu is quick to offer Raki, a Turkish aperitif made with anise, not unlike its Greek cousin, Ouzo. Uslu, the former bar manager — who assumed the general manager position just four months ago — still delights in pouring thedrink himself and introducing it to new audiences. “Turkey is a Muslim country, so we’re not supposed to drink it, but everyone does anyway,” he laughs. “After meals, before meals, basically all the time.” Agora is in fact one of D.C.’s leading purveyors of Raki; in addition to Yeni Raki, the most popular brand, the bar has six other varieties on hand. 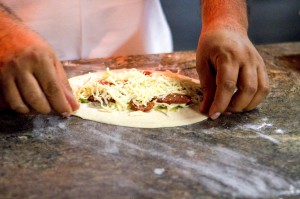 Situated in a building that appears to have once been an old store, Agora makes the most of its location. Walls have apparently been left as found, entirely brick from floor to ceiling. Exposed pipes, high barred windows and metal lanterns on low hanging chains give the dining room the look of a clandestine basement hideaway. The management has considered adding mosaics or old photographs to break up the empty wall space, but to do so would be to take away from the minimalist vibe. 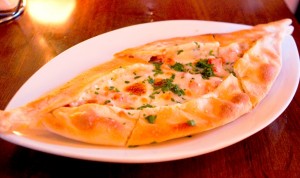 Perhaps the greatest advantage to the small plates format is its encouragement of adventurous ordering. One can order, perhaps, Veal Tongue ($9) comfortably, knowing that three or four other dishes await. While the kitchen may not be able to offer its own tasting menu to every customer, the staff can help create a customized menu, based on individual tastes that may also serve as a personal introduction to Turkey.