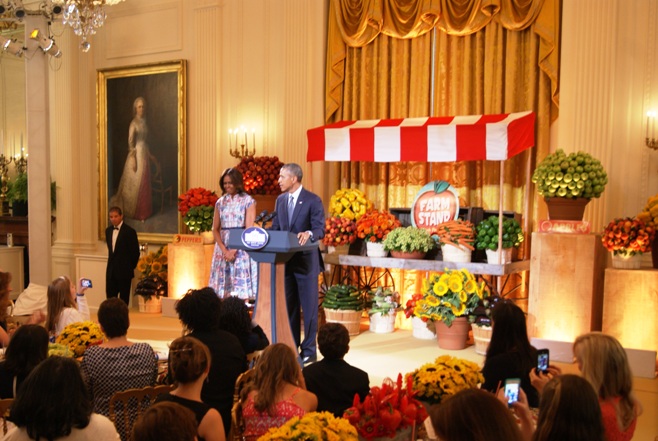 Fifty-four kids between the ages of 8 and 12 were able to check an item off of their bucket list after sharing a meal with First Lady Michelle Obama during the 2014 Kid’s “State Dinner”. The Fifty-four kids and their guardians represented winners of the Healthy Lunchtime Challenge from all U.S. states and territories. The Healthy Lunchtime Challenge, a part of Mrs. Obama’s Let’s Move! Initiative, is a nationwide contest for children to create an original, delicious, and healthy kid’s food recipe. 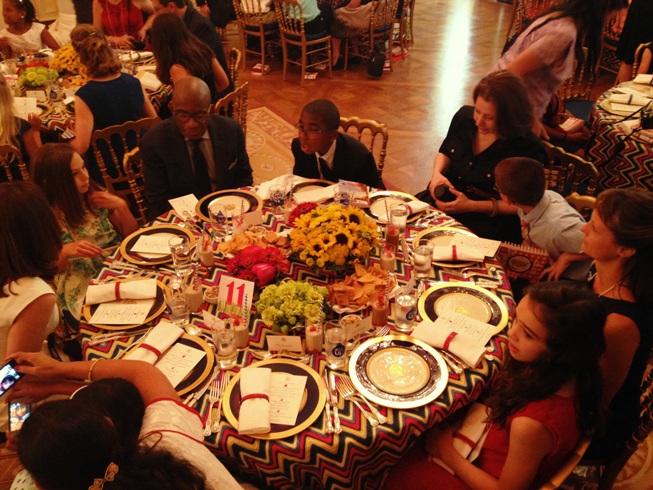 The kids were greeted by a live band and festive decorations as they entered the White House Ballroom. The event commenced with the program speaker, Special Projects Editor and former Editor-and-Chief of the award winning Epicurious.com, Tanya Steel. Steel gave her first remarks on the importance of eating healthy and congratulated the parents and guardians of the winners for encouraging a healthy lifestyle. She was followed by last year’s winner of the Kid’s “State Dinner”, Braeden Mannering, a 10 year old from Delaware whose original recipe, “Tortilla Bowl Deluxe” landed him first place on last year’s challenge. Since his success in last year’s event, Braeden has launched a 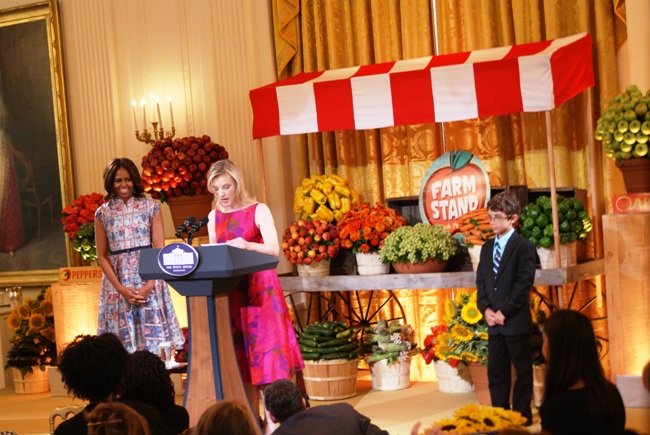 non-profit organization called Brae’s Brown Bags that focuses on providing healthy food to the less fortunate. At this year’s event, Braeden was given the honor to introduce the First Lady to the 2014 winners of the Kid’s “State Dinner”. In his introduction speech, Braeden shared:

“Last year, when I first met Michelle Obama “[…] she was very nice to talk with. She gave us permission to eat with our fingers, except she said that President Obama was not allowed to use his fingers, I thought that was very funny.” 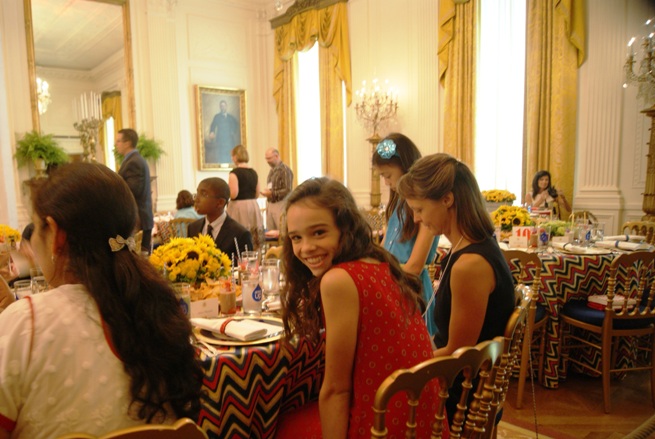 the 54 young chefs in the room for their hard work and leadership. She pointed out the importance of eating and learning how to cook healthy.

“We’ve been fighting extra hard for our new healthy schools lunches, and I have to tell you, […] you all are, my inspiration,” she said. “Kids like you really do inspire me. You all represent 54 reasons why we know that we can do so much better by our kids when it comes to eating healthy.”

She continued her speech encouraging the kids and their guardians to take action and spread the word about healthy eating, cooking, and all its benefits. As the First Lady gave her concluding remarks, President Barack Obama surprised the winners with his appearance. President Obama kept his address upbeat and casual, despite having arrived from a press conference in which he delivered news regarding the downing of the Malaysian airplane by a Russian missile.

He congratulated the winners and encouraged the kids, along with their guardians, to continue the path of healthy eating. He divulged that “everyone has their weakness” and their family is not perfect. He pointed out that he “loos[es][ his] mind with a bowl of chips and guacamole” and the First Lady’s Achilles heel is French fries, to which she quickly added that she was cutting back on.

Following the President’s appearance, the kids were served original recipes carefully selected from the 54 winners. The winner’s were entertained with a surprise performance by members of the cast of “The Lion King.” The event ended with a tour around the White House Garden, located on the south lawn, where kids were able to freely stroll, talk to reporters, and take photos of the White House and the South Fountain.