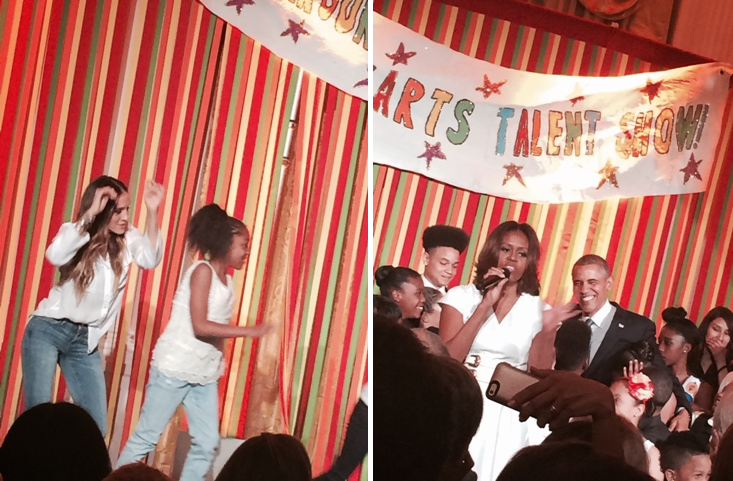 WASHINGTON, D.C. — As the last of the guests take their seats and the press’ cameras continue to flash on the 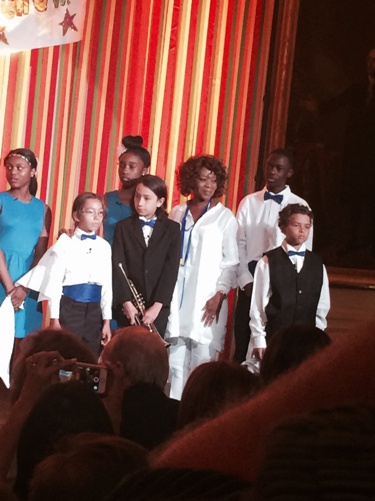 star studded crowd, a child breaks the silence with a loud “ACHOOO!”  As sound laughter lightens the mood the audience rises to their feet as the First Lady Michelle Obama takes the podium as the host of the very first White House Talent Show.

In addition to her Let’s Move Campaign aimed at keeping America’s youth active and healthy, First Lady Michelle Obama has joined with the President’s Committee on the Arts and the Humanities (PCAH) to develop the Turnaround Arts Program, which implements art education programs in low-performing schools across the country.

“When it comes to the power of the arts in education, kids who get involved in the arts have higher grades, higher graduation rates, higher college enrollment rates, and I could go on and on,” said Obama.  “Too often the kids who need arts education the most, are getting it the least.”

“The schools that the PCAH chose for this effort are literally some of the most under-developed schools in the country…and with so many pressing challenges, as you might imagine, bringing the arts to these schools wasn’t necessarily at the top of their priority list.  So we were careful to manage our 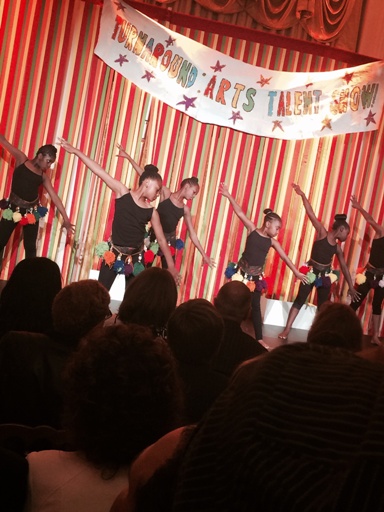 expectations, and I am very proud to say that today, three years later, the Turnaround Arts Program has exceeded not just our expectations, but our wildest hopes and dreams,” she said.

The students covered all bases from reciting poetry, to playing musical instruments, singing and interpretive dance. Many of them performed mixed melodies of chart topping songs.  One group remixed “Wake Me Up” by Avicii with their own original lyrics.  “I won’t give up till it’s all over.  And I’m wiser and I’m older. 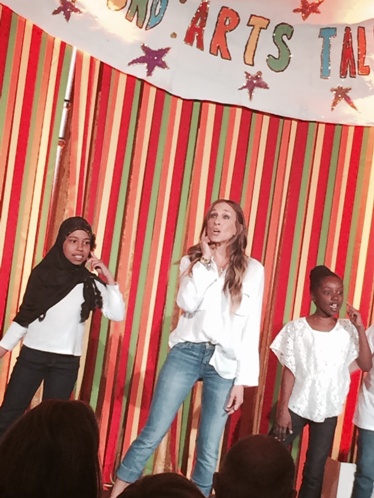 Focusing will make me stronger.  And I’ll be happiest,” the kids sang.  While another singing trio performed Frankie Valli’s “Can’t Take My Eyes off of You.”

Actress Sarah Jessica Parker accompanied several female students on stage as they performed their own rendition of “You’re Never Fully Dressed Without a Smile” from Oscar-winning film “Annie” and acclaimed actress Alfre Woodard joined students on stage from ReNEW Cultural Arts Academy in New Orleans, LA as they sang and recited a poem titled “After the Storm” as a tribute to the victims of Hurricane Katrina.

As the show came to its finale, the First Lady gathered on the stage with all of the Turnaround Talent Show participants and sang and danced alongside the kids.  And there was one final surprise.

“Look who came to the talent show!” Obama said.  The crowd turned to see President Barack Obama entering the room to join the First Lady on stage with the children.  Cameras continued to flash as the audience and kids alike snapped photos of the president.

With the rousing success of the first Turnaround Talent Show, First Lady Michelle Obama acknowledged all of the hard work and contributions that went into the program and her hopes for its expansion in the future.

“Leaders all across the country have got to support the arts.  It’s a priority,” said President Obama, as he congratulated the students.  “You guys were all outstanding.”