You are at:Home»Featured»THE WHITE HOUSE – Michelle Obama: Teachers told me I couldn’t “get into Princeton”, speaking to Bell students
Tweet 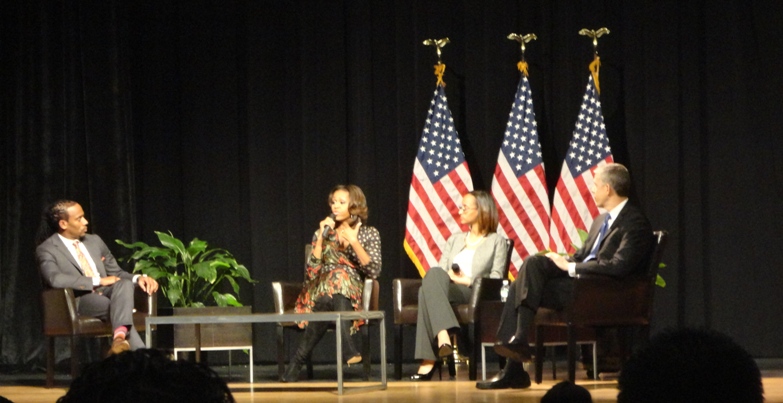 She addressed the students on educational issues including preparation for college, staying focused on studies and resisting the discouragement of financial stresses.  She was joined by BET personality Jeff Johnson, Bell High School alumna Menbere Assefa and Secretary of Education Arne Duncan, who made opening remarks and participated in a Q & A segment following her speech.

During her speech, Obama cited the president’s agenda to ensure the United States has the highest percentage of college graduates by the year 2020.  As she actively joins in her husband’s campaign for student success, she said, “Barack set this goal, because a generation ago, we were number one in college graduates.  But over the last couple of decades, this country has slipped all the way to 12th.” 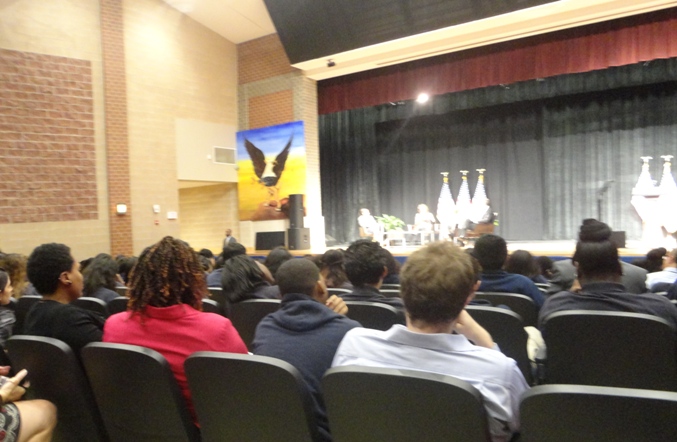 The First Lady went on to elaborate on what the president refers to as the “North Star” goal.  “Barack didn’t just set that goal, because it’s good for our country.  He did it, because he knows how important higher education is to all of you as individuals,” she said, “because when the year 2020 rolls around, nearly two-thirds of all jobs in this country are going to require some form of training beyond high school.”

Obama referenced her own journey on the road to college to today’s sophomores’ arena.  “Growing up, I considered myself pretty lucky.  Even though my parents didn’t have a lot of money — they never went to college themselves — they had an unwavering belief in the power of education,” she said.

In encouraging students not to sell themselves short she stated, “I set my sights high.  I decided I was going to Princeton.”

She went on to say, “Some of my teachers straight up told me that I was setting my sights too high. They told me I was never going to get into a school like Princeton…It was clear to me that nobody was going to take my hand and lead me to where I needed to go; instead it was going to be up to me to reach my goals.”

After the applause simmered the First Lady switched to the topic of tuition.  “I knew my parents would not be able to pay for all of my tuition, so I made sure that I applied for financial aid on time.  That FAFSA form was my best friend.”

She went on to stress the importance of time management and using any and all resources available in assisting with the college application process.

Assefa, a former student from Bell  who eventually graduated from James Madison University, is now a management assistant in policy and compliance administration for the District of Columbia government.  Assefa, coming from a high school with such a high population of immigrant students spoke pointedly about obtaining scholarships for college tuition.

“There are scholarships out there.  There are funds out there for people to get and make sure that they attend higher education,” she said.

She also mentioned the importance of having a strong support system, saying, “This gives the students an opportunity to see that somebody else is supporting them, and motivating them as well, such as the First Lady.”

Many hands went in the air when Secretary of Education Duncan asked in his opening remarks how many students planned on attending college.  As the group of speakers wrapped up their segments, they moved across the stage to a seated area to engage in a discussion with the 10th grade audience.

A silenced audience was now able to ask the panel questions from the microphone of BET’s new host of “106th and Park”, Keshia Chante.

Kyle, one of the Bell students, asked the panel, “What was the most rigorous part about being in college?”

The First Lady responded, “College is a lot of work.  So for me, it was really learning how to balance my time.  Because the other thing that you find in college is that you don’t have anybody looking over your shoulder and making sure that you finish…You’re really an independent individual when you are in college and that makes it very easy to procrastinate.” She continued, “So it’s really up to you to set a pace for yourself.”