You are at:Home»Featured»HUMAN WRITES – Why NPR’s Diane Rehm is still fighting after the death of her husband.
Tweet 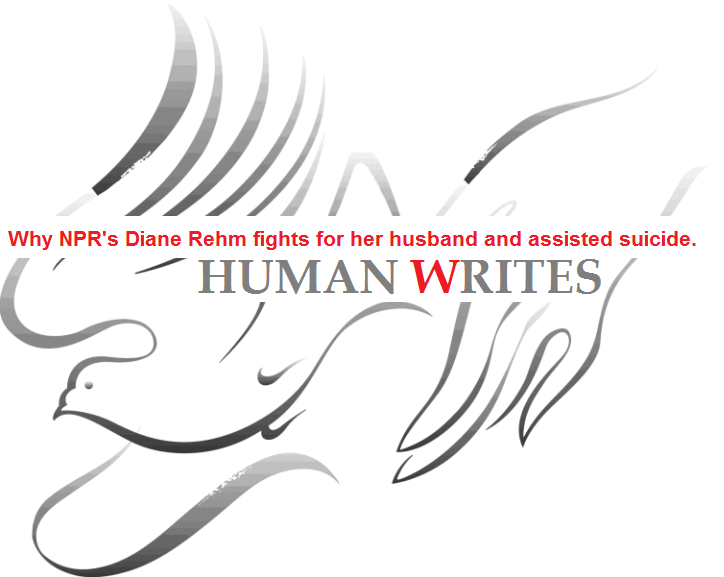 After residing in an assisted living facility since November 2012, a fully competent and fatally ill man made one last request to his physician. John Rehm, who suffered from the incurable Parkinson’s disease, was no longer able to use his arms and legs, nor feed himself, asked his doctor to administer a fatal dose of prescription drugs so that he could pass away peacefully. When the doctor informed him that the state in which he lived had no ‘right to die law,’ Rehm was forced to make a decision that has since taken the nation’s capital by storm. Rehm also happens to be the husband of beloved Washington, D.C. radio personality and NPR show host Diane Rehm, who is in the middle of a public outcry after her husband decided to end his own life through the only methods available in the state of Maryland…dehydration.

John was diagnosed with Parkinson’s disease in 2003 and his condition got continually worse over the years. “Both of us had agreed that when the time came, we would be there for each other in whatever way was necessary,” his wife said. “So when he made up his mind, that was it.”

Upon Rehm’s ‘aid to die’ request, his physician replied, “I cannot do that legally, morally or ethically…I don’t disagree with your wish that you could die with the help of a physician but I cannot do it in the state of Maryland.” According to Diane, her husband said, “He felt betrayed.” He told the doctor, “I felt that when the time came, you would be able to help me.”
Now out of options, John ultimately ended his life and suffering by starving himself to death and by refusing food and liquids. His wife of 54 years stayed by his side for the nine days it took him to die. Voluntarily stopping eating and drinking (VSED) is protected under the United States constitution and is upheld in the U.S. Supreme Court, legalizing it in all 50 states. And while Rehm’s doctor went on record to say that small doses of morphine were administered to ease the pain and suffering, Diane in an interview with NBC News spoke of the horror of watching the life in her husband’s eyes slowly slip away.

“I wanted to take applesauce and put it in his mouth,” Rehm said. “But you can’t do that. You have to respect someone else’s wishes. You have to honor his desires. And he was finished with life. He said ‘I am looking forward to the next journey’,” she added.

Diane is in favor of the platform of advocacy agencies such as ‘Compassion & Choices’ which rallies for ‘aid in dying’ laws to be adopted by more U.S. states. Oregon was the first state to pass a ‘right to die’ law in 2008 and to date only Vermont, Montana, New Mexico and Washington have followed in those footsteps.

“I have no doubt that he was terminally ill and if he was in Oregon he would have qualified for aid in dying,” said Barbara Coombs Lee, president of Compassion & Choices. “He should have had better choices.”

While the topic remains inevitably controversial, ‘Compassion & Choices’ maintains the notion that “Giving a fading patient the opportunity for a peaceful and dignified death is not suicide,” which the group defines as an act by people with severe depression or other mental problems.
Fifty-eight-year-old Robert Mitton who, as of last year, was suffering from heart failure said, “This should be a basic human right…I am facing my imminent death,” he said, as he asked why people in Montana and New Mexico “are able to die with dignity and I am not.”
Diane elaborated on the issue by stating, “I would like to, in every state across the country, in every city, in every county, I would very much like to see a justification, an allowance, for aid in dying…We do not let our little animals suffer and people shouldn’t have to suffer.”

With officials on both sides of the issue maintaining their stance, meanwhile, the people in the middle contemplate who should have the final say in the way someone decides to end their own suffering. Is it justifiable to force a person to live who has competently voiced their wishes to die? Is it humane for a doctor to stand by while someone with no other option chooses to slowly starve themselves to death? Should physicians be held ethically accountable if they assist a patient in ending their life? And what about the patients and their families who must suffer through the lengthy process of VSED?

One of Washington, D.C.’s most popular personalities, Rehm, though grieving, courageously remarked, “I think there are so many reasons why people choose to end their lives, and I am not talking about people who are desperate, who are miserable and lonely. I am talking about people who have lived their lives and are satisfied with what they have had and are really ready to let go.”

What do you think?