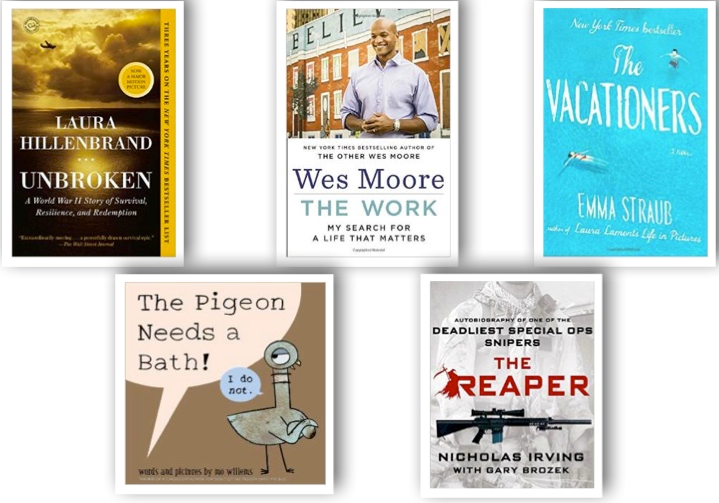 A blue-collar girl from the Lone Star State shares her story on how she found “long-lasting love” through an exquisite tale of meeting her mate. In her story, a psychic who demands she lay down all of her emotional baggage, write a perfect mate list and define what love will look like when it finds her points her towards a 1-2-3 Get-Ready-For-Love plan. With much persistence and dedication, she finds out more about herself throughout this process than ever before, and that confidence and belief is what ultimately lands her the guy she has dreamed of living life with.

Zero Belly Diet is the revolutionary new plan to turn off your fat genes and help keep you lean for life! Nutrition expert David Zinczenko—the New York Times bestselling author of the Abs Diet series, Eat This, Not That! series, and Eat It to Beat It!—has spent his entire career learning about belly fat—where it comes from and what it does to us. And what he knows is this: There is no greater threat to you and your family—to your health, your happiness, even your financial future.

On a May afternoon in 1943, an Army Air Forces bomber crashed into the Pacific Ocean and disappeared, leaving only a spray of debris and a slick of oil, gasoline, and blood. Then, on the ocean surface, a face appeared. It was that of a young lieutenant, the plane’s bombardier, who was struggling to a life raft. So began one of the most extraordinary odysseys of the Second World War.

The lieutenant’s name was Louis Zamperini. In boyhood, he’d been a cunning and incorrigible delinquent. As a teenager, he had channeled his defiance into running, discovering a prodigious talent that had carried him to the Berlin Olympics. But when war had come, the athlete had become an airman, embarking on a journey that led to his doomed flight, a tiny raft, and a drift into the unknown.

Ahead of Zamperini lay thousands of miles of open ocean, leaping sharks, a foundering raft, thirst and starvation, enemy aircraft, and, beyond, a trial even greater. His fate, whether triumph or tragedy, would be suspended on the fraying wire of his will. Unbroken is a testament to the resilience of the human mind, body, and spirit.

An irresistible, deftly observed novel about the secrets, joys, and jealousies that rise to the surface over the course of an American family’s two-week stay in Mallorca.

For the Posts, a two-week trip to the Balearic island of Mallorca with their extended family and friends is a celebration: Franny and Jim are observing their thirty-fifth wedding anniversary, and their daughter, Sylvia, has graduated from high school. The sunlit island, its mountains and beaches, its tapas and tennis courts, also promise an escape from the tensions simmering at home in Manhattan. But all does not go according to plan: over the course of the vacation, secrets come to light, old and new humiliations are experienced, childhood rivalries resurface, and ancient wounds are exacerbated.

This is a story of the sides of ourselves that we choose to show and those we try to conceal, of the ways we tear each other down and build each other up again, and the bonds that ultimately hold us together. With wry humor and tremendous heart, Emma Straub delivers a richly satisfying story of a family in the midst of a maelstrom of change, emerging irrevocably altered yet whole.

Trigger Warning explores the masks we all wear and the people we are beneath them to reveal our vulnerabilities and our truest selves. Here is a rich cornucopia of horror and ghosts stories, science fiction and fairy tales, fabulism and poetry that explore the realm of experience and emotion. In Adventure Story—a thematic companion to The Ocean at the End of the Lane—Gaiman ponders death and the way people take their stories with them when they die. His social media experience A Calendar of Tales are short takes inspired by replies to fan tweets about the months of the year—stories of pirates and the March winds, an igloo made of books, and a Mother’s Day card that portends disturbances in the universe. Gaiman offers his own ingenious spin on Sherlock Holmes in his award-nominated mystery tale The Case of Death and Honey. And Click-Clack the Rattlebag explains the creaks and clatter we hear when we’re all alone in the darkness.

A sophisticated writer whose creative genius is unparalleled, Gaiman entrances with his literary alchemy, transporting us deep into the realm of imagination, where the fantastical becomes real and the everyday incandescent. Full of wonder and terror, surprises and amusements, Trigger Warning is a treasury of delights that engage the mind, stir the heart, and shake the soul from one of the most unique and popular literary artists of our day.

Groundbreaking, thrilling and revealing, The Reaper is the astonishing memoir of Special Operations Direct Action Sniper Nicholas Irving, the 3rd Ranger Battalion’s deadliest sniper with 33 confirmed kills, though his remarkable career total, including probables, is unknown.

Irving shares the true story of his extraordinary military career, including his deployment to Afghanistan in the summer of 2009, when he set another record, this time for enemy kills on a single deployment. His teammates and chain of command labeled him “The Reaper,” and his actions on the battlefield became the stuff of legend, culminating in an extraordinary face-off against an enemy sniper known simply as The Chechnian.

Irving’s astonishing first-person account of his development into an expert assassin offers a fascinating and extremely rare view of special operations combat missions through the eyes of a Ranger sniper during the Global War on Terrorism. From the brotherhood and sacrifice of teammates in battle to the cold reality of taking a life to protect another, no other book dives so deep inside the life of an Army sniper on point.

In Being Mortal, bestselling author Atul Gawande tackles the hardest challenge of his profession: how medicine can not only improve life but also the process of its ending

Medicine has triumphed in modern times, transforming birth, injury, and infectious disease from harrowing to manageable. But in the inevitable condition of aging and death, the goals of medicine seem too frequently to run counter to the interest of the human spirit. Nursing homes, preoccupied with safety, pin patients into railed beds and wheelchairs. Hospitals isolate the dying, checking for vital signs long after the goals of cure have become moot. Doctors, committed to extending life, continue to carry out devastating procedures that in the end extend suffering.

Gawande, a practicing surgeon, addresses his profession’s ultimate limitation, arguing that quality of life is the desired goal for patients and families. Gawande offers examples of freer, more socially fulfilling models for assisting the infirm and dependent elderly, and he explores the varieties of hospice care to demonstrate that a person’s last weeks or months may be rich and dignified.

Full of eye-opening research and riveting storytelling, Being Mortal asserts that medicine can comfort and enhance our experience even to the end, providing not only a good life but also a good end.

Anne Lamott writes about faith, family, and community in essays that are both wise and irreverent. It’s an approach that has become her trademark. Now in Small Victories, Lamott offers a new message of hope that celebrates the triumph of light over the darkness in our lives. Our victories over hardship and pain may seem small, she writes, but they change us—our perceptions, our perspectives, and our lives. Lamott writes of forgiveness, restoration, and transformation, how we can turn toward love even in the most hopeless situations, how we find the joy in getting lost and our amazement in finally being found.

Profound and hilarious, honest and unexpected, the stories in Small Victories are proof that the human spirit is irrepressible.

The Pigeon really needs a bath! Except, the Pigeon’s not so sure about that. Besides, he took a bath last month! Maybe. It’s going to take some serious convincing to try and get the Pigeon to take the plunge.

The Work is the story of how one young man traced a path through the world to find his life’s purpose. Wes Moore graduated from a difficult childhood in the Bronx and Baltimore to an adult life that would find him at some of the most critical moments in our recent history: as a combat officer in Afghanistan; a White House fellow in a time of wars abroad and disasters at home; and a Wall Street banker during the financial crisis. In this insightful book, Moore shares the lessons he learned from people he met along the way—from the brave Afghan translator who taught him to find his fight, to the resilient young students in Katrina-ravaged Mississippi who showed him the true meaning of grit, to his late grandfather, who taught him to find grace in service.

Moore also tells the stories of other twenty-first-century change-makers who’ve inspired him in his search, from Daniel Lubetzky, the founder of KIND, to Esther Benjamin, a Sri Lankan immigrant who rose to help lead the Peace Corps. What their lives—and his own misadventures and moments of illumination—reveal is that our truest work happens when we serve others, at the intersection between our gifts and our broken world. That’s where we find the work that lasts.

An intimate narrative about finding meaning in a volatile age, The Work will inspire readers to see how we can each find our own path to purpose and help create a better world.