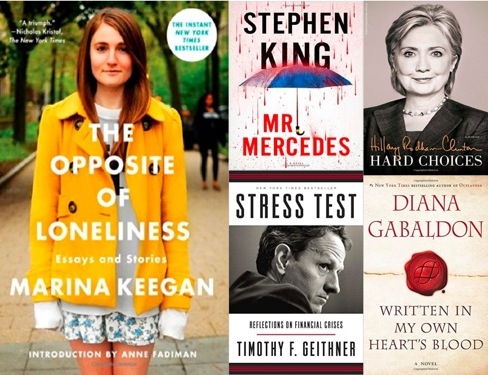 1.The Opposite of Loneliness

Even though she was just twenty-two when she died, Marina left behind a rich, expansive trove of prose that, like her title essay, captures the hope, uncertainty, and possibility of her generation. The Opposite of Loneliness is an assem­blage of Marina’s essays and stories that, like The Last Lecture, articulates the universal struggle that all of us face as we figure out what we aspire to be and how we can harness our talents to make an impact on the world.

In All Joy and No Fun, award-winning journalist Jennifer Senior tries to tackle this question, isolating and analyzing the many ways in which children reshape their parents’ lives, She argues that changes in the last half century have radically altered the roles of today’s mothers and fathers, making their mandates at once more complex and far less clear.

Recruiting from a wide variety of sources—in history, sociology, economics, psychology, philosophy, and anthropology—she dissects both the timeless strains of parenting and the ones that are brand new, and then brings her research to life in the homes of ordinary parents around the country. Meticulously researched yet imbued with emotional intelligence, All Joy and No Fun makes us reconsider some of our culture’s most basic beliefs about parenthood, all while illuminating the profound ways children deepen and add purpose to our lives. By focusing on parenthood, rather than parenting, the book is original and essential reading for mothers and fathers of today—and tomorrow

No one has ever sacrificed anything for God.  If you always get back more than you gave up, have you sacrificed anything at all?  The eternal reward always outweighs the temporal sacrifice.The message of All In is simple: if Jesus is not Lord of all then Jesus is not Lord at all.  It’s all or nothing. It’s now or never.   Kneeling at the foot of cross of Christ and surrendering to His Lordship is a radical act of dethroning yourself and enthroning Christ as King.  It’s also an act of disowning yourself.  Nothing belongs to you. Not even you.

Batterson writes, for many years, I thought I was following Jesus.  I wasn’t.  I had invited Jesus to follow me.  I call it inverted Christianity.  And it’s a subtle form of selfishness that masquerades as spirituality.  That’s when I sold out and bought in.  When did we start believing that the gospel is an insurance plan?  It’s a daring plan.  Jesus did not die just to keep us safe. He died to make us dangerous.”

As a child in small-town Oklahoma, Elizabeth Warren yearned to go to college and then become an elementary school teacher—an ambitious goal, given her family’s modest means. Early marriage and motherhood seemed to put even that dream out of reach, but fifteen years later she was a distinguished law professor with a deep understanding of why people go bankrupt. Then came the phone call that changed her life: could she come to Washington DC to help advise Congress on rewriting the bankruptcy laws?

Thus began an impolite education into the bare-knuckled, often dysfunctional ways of Washington. She fought for better bankruptcy laws for ten years and lost. She tried to hold the federal government accountable during the financial crisis but became a target of the big banks. She came up with the idea for a new agency designed to protect consumers from predatory bankers and was denied the opportunity to run it. Finally, at age 62, she decided to run for elective office and won the most competitive—and watched—Senate race in the country.

In this passionate, funny, rabble-rousing book, Warren shows why she has chosen to fight tooth and nail for the middle class—and why she has become a hero to all those who believe that America’s government can and must do better for working families.

It Ain’t Over . . . Till It’s Over introduces us to sixty amazing women who are proving that it’s never too late to live out a dream—to launch a business, travel the world, get a PhD, indulge a creative impulse, make a family recipe famous, escape danger, find love, or fill a void in life with a challenging new experience. Meet a graphic artist who fulfilled a childhood ambition by going to med school at age forty-two; a suburban mom whose innovative snack recipe for her daughter’s lunchbox turned into a multimillion-dollar business; a private-practice psychiatrist who convinced her husband that they should quit their jobs and take off on an exciting, open-ended, cross-country adventure—in a giant bus, no less!; and a middle-aged English teacher who, devastated to discover that her husband was cheating on her, refused to be a victim, filed for divorce, and began the challenging journey of rebuilding her life. Brimming with anecdotes that will inspire smiles, tears, and—most of all—hope, It Ain’t Over speaks to women of all ages with an empowering message: The best is yet to come!

“All of us face hard choices in our lives,” Hillary Rodham Clinton writes at the start of this personal chronicle of years at the center of world events. “Life is about making such choices. Our choices and how we handle them shape the people we become.”Hilary Rodham Clinton dives into the hard choices the she, as secretary of State, and the Obama administration had to face. Starting out with the winding down of two wars, a global financial crisis and the growing competition with China and threats with Iran and North Korea in addition to the revolution in the Middle East. Along the way, they grappled with some of the toughest dilemmas of US foreign policy. Drawing on conversations with numerous leaders and experts, Secretary Clinton offers her views on what it will take for the United States to compete and thrive in an interdependent world. She makes a passionate case for human rights and the full participation in society of women, youth, and LGBT people. An astute eyewitness to decades of social change, she distinguishes the trendlines from the headlines and describes the progress occurring throughout the world, day after day.

New York Times Bestseller, Washington Post Bestseller, and Los Angeles Times Bestseller
Stress Test is the story of Tim Geithner’s education in financial crises.
As president of the Federal Reserve Bank of New York and then as President Barack Obama’s secretary of the Treasury, Timothy F. Geithner helped the United States navigate the worst financial crisis since the Great Depression, from boom to bust to rescue to recovery. In a candid, riveting, and historically illuminating memoir, he takes readers behind the scenes of the crisis, explaining the hard choices and politically unpalatable decisions he made to repair a broken financial system and prevent the collapse of the Main Street economy.

He takes readers inside the room as the crisis began, intensified, and burned out of control, discussing the most controversial episodes of his tenures at the New York Fed and the Treasury, including the rescue of Bear Stearns; the harrowing weekend when Lehman Brothers failed; the searing crucible of the AIG rescue as well as the furor over the firm’s lavish bonuses; the battles inside the Obama administration over his widely criticized but ultimately successful plan to end the crisis; and the bracing fight for the most sweeping financial reforms in more than seventy years. Secretary Geithner also describes the aftershocks of the crisis, including the administration’s efforts to address high unemployment, a series of brutal political battles over deficits and debt, and the drama over Europe’s repeated flirtations with the economic abyss. In the end, Stress Test is a hopeful story about public service. In this revealing memoir, Tim Geithner explains how America withstood the ultimate stress test of its political and financial systems.

Mr. Mercedes is a war between good and evil, from the master of suspense whose insight into the mind of this obsessed, insane killer is chilling and unforgettable. In the frigid pre-dawn hours, in a distressed Midwestern city, hundreds of desperate unemployed folks are lined up for a spot at a job fair. Without warning, a lone driver plows through the crowd in a stolen Mercedes, running over the innocent, backing up, and charging again. Eight people are killed; fifteen are wounded. The killer escapes.
In another part of town, months later, a retired cop named Bill Hodges is still haunted by the unsolved crime. When he gets a crazed letter from someone who self-identifies as the “perk” and threatens an even more diabolical attack, Hodges wakes up from his depressed and vacant retirement, hell-bent on preventing another tragedy.
Brady Hartsfield lives with his alcoholic mother in the house where he was born. He loved the feel of death under the wheels of the Mercedes, and he wants that rush again. Only Bill Hodges, with a couple of highly unlikely allies, can apprehend the killer before he strikes again. And they have no time to lose, because Brady’s next mission, if it succeeds, will kill or maim thousands.

Growing up in the rural Southern hamlet of Natchez, Mississippi, Penn Cage learned everything he knows about honor and duty from his father, Tom Cage. But now the beloved family doctor and pillar of the community is accused of murdering Violet Turner, the beautiful nurse with whom he worked in the dark days of the early 1960s. A fighter who has always stood for justice, Penn is determined to save his father, even though Tom, stubbornly evoking doctor-patient privilege, refuses to speak up in his own defense. Penn follows a bloody trail that stretches back forty years, to one undeniable fact: no one—black or white, young or old, brave or not—is ever truly safe. With everything on the line, including his own life, Penn must decide how far he will go to protect those he loves . . . and see justice done, once and for all.

10. Written in my own heart’s blood

In her now classic novel Outlander, Diana Gabaldon told the story of Claire Randall, an English ex-combat nurse who walks through a stone circle in the Scottish Highlands in 1946, and disappears . . . into 1743. France declares war on Great Britain in 1778,  the British army leaves Philadelphia, and George Washington’s troops leave Valley Forge in pursuit. At this moment, Jamie Fraser returns from a presumed watery grave to discover that his best friend has married his wife, his illegitimate son has discovered (to his horror) who his father really is, and his beloved nephew, Ian, wants to marry a Quaker. Meanwhile, Jamie’s wife, Claire, and his sister, Jenny, are busy picking up the pieces.
The Frasers can only be thankful that their daughter Brianna and her family are safe in twentieth-century Scotland. Or not. In fact, Brianna is searching for her own son, who was kidnapped by a man determined to learn her family’s secrets. Her husband, Roger, has ventured into the past in search of the missing boy . . . never suspecting that the object of his quest has not left the present. Now, with Roger out of the way, the kidnapper can focus on his true target: Brianna herself.