Warren Buffett Invests Like a Girl, and Why You Should Too

Author and former editor-in-chief at The Motley Fool, Louann Lofton remembers her early experiences with money, which left an indelible mark on her life and her choice of a future career.  Those experiences played an in 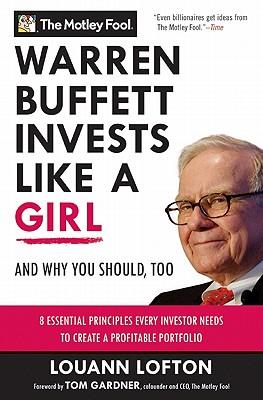 tegral role in deciding to pen her new book “Warren Buffett Invests Like a Girl, and Why You Should Too.” Lofton recalls traumatic years as a youth and says, “Thinking back to my childhood in Mississippi, growing up in a tiny three-stop-light town (literally – three!). I’d have never imagined I’d one day be face-to-face with the Oracle of Omaha. But then, I’d have never imagined, either, that my father would die when I was just shy of 15, and that that traumatic experience would be the thing that would lead me, indirectly, to Buffett himself…Because my father died, it meant that I would inherit some money upon my 21st birthday. And because of that, I decided — about a year out of high school — to learn about investing, so I didn’t squander the opportunity presented to me by that money…It dawned on me that I could do what Buffett did, that I could invest that money in solid, well-run companies; companies I understood, companies I would be proud to own a part of. I didn’t have to chase the latest investment fad or load fancy trading software onto my computer. Buffett didn’t even have a computer!”

Inspired by Buffet’s style of investing, in her book Lofton says like the Oracle of Omaha, investors “have to be able to control your emotions.”  She insists that in 2008 when everyone was selling, wise investors should have been buying as the markets were declining.  Buffett’s famous for advising investors to “be greedy when others are fearful and fearful when others are greedy.” She says, “Men really view investing as a game, as a gamble,” while women generally do more research, hold stocks longer and examine closely the culture and people who are running the companies they invest in.

1. Everything Is Its Own Reward

Paul Madonna travels across the globe offering his second work of drawings and writings that profile landscapes, short stories, thoughts and conversations. Everything Is Its Own Reward provides an entertaining and remarkable insight into the world and the human mind and exceeds Madonna’s first book, All Over Coffee.

2. When We Were Young

When We Were Young takes the reader through the life of the main character Jonah as he grows up, learning lessons and experiencing problems that he must resolve. The story, while a novel, reads like a memoir and provides a unique look at a teen growing into an adult. Author Jason Jepson creates a memorable story that will leave readers begging for more.

Against All Enemies focuses on the protagonist Maxwell Moore, a former Navy SEAL who survives a devastating attack by terrorists that kill his friends. In Tom Clancy fashion, Moore, in his search for revenge, must solve complex conspiracies in a race against time. The book, despite being 756 pages, reads fast and is a must read for summer 2011.

Ann Patchett spins a complex and intriguing story in her recent novel State of Wonder, by creating a primitive tribe living deep in Brazil that features women that remain fertile with age. The result is a pursuit by major U.S. companies to discover and seize the tribes’ secret while the heroine, Marina, must battle between keeping the secret safe or letting the world know about the state of wonder.

Folly Beach is the memorable tale of a woman who returns to her hometown to discover a new life filled with love, loss, family and friends. The main character, Cate Cooper, travels to Folly Beach in South Carolina where she grew up and gives the book’s readers a feel-good story perfect for a summer afternoon.

The latest book, Poke The Box is a call to action about the initiative you’re taking – in your job or in your life. Godin’s new book is the antithesis to any couch potato thinking and proves inspiring and monumental in its approach to motivating the employed and unemployed.

Dreams of Joy is the heartfelt story of a headstrong girl named Joy who runs away from her family to find her birth father in China. Set in the 1950s and 60s, the story describes the love between a daughter, a mother and a sister and depicts the power of family bonds.

From master historian David McCullough comes the history of Americans who traveled to France in the early 1800s in pursuit of enlightenment they could not find at home. The story provides profile of these characters as they live in Paris to become artists, musicians, writers, doctors and educators. The Greater Journey is a wonderful look at new world people in an old world society.

9. 56: Joe DiMaggio and the Last Magic Number in Sports

Kostya Kennedy’s story recounts the career of Joe DiMaggio and the hit streak in the summer of 1941 that changed the lives of baseball fans forever. A nostalgic baseball story for sports fans everywhere, 56 reminds us all of the magic of baseball.

10. The Last Gunfight: The Real Story of the Shootout at the O.K. Corral–And How It Changed the American West

Jeff Guinn takes a look at the real gunfight at O.K. Coral and how the fabled shootout changed the Wild West forever. Guinn aims at historic figures such as Wyatt Earp and Doc Holliday and revolutions their famous gunfight with evil cowboys in Tombstone. The Last Gunfight is a must read.

Summer Rental tells the tale of a group of friends that travel to the Outer Banks in North Carolina one summer and rent a beach house—and the hilarious events that ensue. Describing the bygone era of renting a beach house back in the day, Mary Kay Andrews offers a warm story perfect for the summer.

One Summer is the story of a man who finds the chance to love again and reconnect with family in the wake of discovering that he has a terminal illness. Character Jack Armstrong is a man with little time who, in the face of death, discovers the beauty of life while staying at a beach house with family in South Carolina.

Buried Prey is a fast-paced mystery that lets readers follow detective Lucas Davenport as he investigates the murder of two girls in 1985. A thriller to the last page, Buried Prey is the latest from best-selling author John Stanford.

The story behind boxing great Sugar Ray Leonard is discovered in his autobiography that tells the tale of the fighter’s life in and out of the ring. An Olympic hero, Sugar Ray Leonard went on to find success as a boxer but hardships followed him wherever he went.

By Tim Tebow with Nathan Whitaker, 2011

Tim Tebow was a college superstar at Florida and is now a starting quarterback for the NFL’s Denver Broncos. Through My Eyes chronicles the journey of Tebow from his days on the college gridiron to his time as a rookie in the NFL.