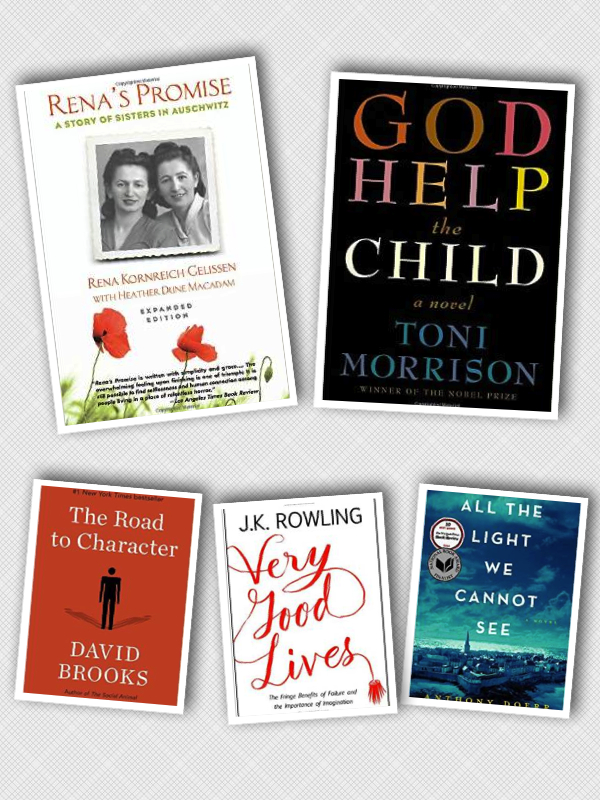 Spare and unsparing, God Help the Child—the first novel by Toni Morrison to be set in our current moment—weaves a tale about the way the sufferings of childhood can shape, and misshape, the life of the adult.

At the center: a young woman who calls herself Bride, whose stunning blue-black skin is only one element of her beauty, her boldness and confidence, her success in life, but which caused her light-skinned mother to deny her even the simplest forms of love. There is Booker, the man Bride loves, and loses to anger. Rain, the mysterious white child with whom she crosses paths. And finally, Bride’s mother herself, Sweetness, who takes a lifetime to come to understand that “what you do to children matters. And they might never forget.”

A fierce and provocative novel that adds a new dimension to the matchless oeuvre of Toni Morrison.

In March 1942, Rena Kornreich and 997 other young women were rounded up and forced onto the first Jewish transport of women to Auschwitz. Soon after, Rena was reunited with her sister Danka at the camp, beginning a story of love and courage that would last three years and forty-one days. From smuggling bread for their friends to narrowly escaping the ever-present threats that loomed at every turn, the compelling events in Rena’s Promise remind us that humanity and hope can survive inordinate brutality.

3.  The Road to Character

With the wisdom, humor, curiosity, and sharp insights that have brought millions of readers to his New York Times column and his previous bestsellers, David Brooks has consistently illuminated our daily lives in surprising and original ways. In The Social Animal, he explored the neuroscience of human connection and how we can flourish together. Now, in The Road to Character, he focuses on the deeper values that should inform our lives. Responding to what he calls the culture of the Big Me, which emphasizes external success, Brooks challenges us, and himself, to rebalance the scales between our “résumé virtues”—achieving wealth, fame, and status—and our “eulogy virtues,” those that exist at the core of our being: kindness, bravery, honesty, or faithfulness, focusing on what kind of relationships we have formed.

Looking to some of the world’s greatest thinkers and inspiring leaders, Brooks explores how, through internal struggle and a sense of their own limitations, they have built a strong inner character. Labor activist Frances Perkins understood the need to suppress parts of herself so that she could be an instrument in a larger cause. Dwight Eisenhower organized his life not around impulsive self-expression but considered self-restraint. Dorothy Day, a devout Catholic convert and champion of the poor, learned as a young woman the vocabulary of simplicity and surrender. Civil rights pioneers A. Philip Randolph and Bayard Rustin learned reticence and the logic of self-discipline, the need to distrust oneself even while waging a noble crusade.

Blending psychology, politics, spirituality, and confessional, The Road to Character provides an opportunity for us to rethink our priorities, and strive to build rich inner lives marked by humility and moral depth.

A remarkable history with elements of both In the President’s Secret Service and The Butler, The Residence offers an intimate account of the service staff of the White House, from the Kennedys to the Obamas.

America’s First Families are unknowable in many ways. No one has insight into their true character like the people who serve their meals and make their beds every day. Full of stories and details by turns dramatic, humorous, and heartwarming, The Residence reveals daily life in the White House as it is really lived through the voices of the maids, butlers, cooks, florists, doormen, engineers, and others who tend to the needs of the President and First Family.

These dedicated professionals maintain the six-floor mansion’s 132 rooms, 35 bathrooms, 28 fireplaces, three elevators, and eight staircases, and prepare everything from hors d’oeuvres for intimate gatherings to meals served at elaborate state dinners. Over the course of the day, they gather in the lower level’s basement kitchen to share stories, trade secrets, forge lifelong friendships, and sometimes even fall in love.

Combining incredible first-person anecdotes from extensive interviews with scores of White House staff members—many speaking for the first time—with archival research, Kate Andersen Brower tells their story. She reveals the intimacy between the First Family and the people who serve them, as well as tension that has shaken the staff over the decades. From the housekeeper and engineer who fell in love while serving President Reagan to Jackie Kennedy’s private moment of grief with a beloved staffer after her husband’s assassination to the tumultuous days surrounding President Nixon’s resignation and President Clinton’s impeachment battle, The Residence is full of surprising and moving details that illuminate day-to-day life at the White House.

5.  The Adventures of Beekle: An Unimaginary Friend

This magical story begins on an island far away where an imaginary friend is born. He patiently waits his turn to be chosen by a real child, but when he is overlooked time and again, he sets off on an incredible journey to the bustling city, where he finally meets his perfect match and-at long last-is given his special name: Beekle.

6.  All the Light We Cannot See

From the highly acclaimed, multiple award-winning Anthony Doerr, the beautiful, stunningly ambitious instant New York Times bestseller about a blind French girl and a German boy whose paths collide in occupied France as both try to survive the devastation of World War II.

Marie-Laure lives with her father in Paris near the Museum of Natural History, where he works as the master of its thousands of locks. When she is six, Marie-Laure goes blind and her father builds a perfect miniature of their neighborhood so she can memorize it by touch and navigate her way home. When she is twelve, the Nazis occupy Paris and father and daughter flee to the walled citadel of Saint-Malo, where Marie-Laure’s reclusive great-uncle lives in a tall house by the sea. With them they carry what might be the museum’s most valuable and dangerous jewel.

In a mining town in Germany, the orphan Werner grows up with his younger sister, enchanted by a crude radio they find. Werner becomes an expert at building and fixing these crucial new instruments, a talent that wins him a place at a brutal academy for Hitler Youth, then a special assignment to track the resistance. More and more aware of the human cost of his intelligence, Werner travels through the heart of the war and, finally, into Saint-Malo, where his story and Marie-Laure’s converge.

A New York Times Bestselling Author, Dr. Eric Parrish, a recently separated single dad, is Chief of a prominent Psychiatric Unit in a hospital outside Philadelphia. But when he takes on a new patient, Eric’s entire world begins to crumble. Seventeen-year-old Max is having trouble handling his grandmother’s terminal illness. Severe OCD and violent thoughts about a girl he likes make him high risk. Then the girl is found murdered. With Max nowhere to be found, Eric goes looking for him.

8.  Very Good Lives: The Fringe Benefits of Failure and the Importance of Imagination

In 2008, J.K. Rowling delivered a deeply affecting commencement speech at Harvard University. Now published for the first time in book form, VERY GOOD LIVES presents J.K. Rowling’s words of wisdom for anyone at a turning point in life. How can we embrace failure? And how can we use our imagination to better both ourselves and others?

Drawing from stories of her own post-graduate years, the world famous author addresses some of life’s most important questions with acuity and emotional force.

In 2000, Bill and Hillary Clinton owed millions of dollars in legal debt. Since then, they’ve earned over $130 million. Where did the money come from? Most people assume that the Clintons amassed their wealth through lucrative book deals and high-six figure fees for speaking gigs. Now, Peter Schweizer shows who is really behind those enormous payments.

In his New York Times bestselling books Extortion and Throw Them All Out, Schweizer detailed patterns of official corruption in Washington that led to congressional resignations and new ethics laws. In Clinton Cash, he follows the Clinton money trail, revealing the connection between their personal fortune, their “close personal friends,” the Clinton Foundation, foreign nations, and some of the highest ranks of government.

Schweizer reveals the Clinton’s troubling dealings in Kazakhstan, Colombia, Haiti, and other places at the “wild west” fringe of the global economy. In this blockbuster exposé, Schweizer merely presents the troubling facts he’s uncovered. Meticulously researched and scrupulously sourced, filled with headline-making revelations, Clinton Cash raises serious questions of judgment, of possible indebtedness to an array of foreign interests, and ultimately, of fitness for high public office.

Two-time winner of the Pulitzer Prize David McCullough tells the dramatic story-behind-the-story about the courageous brothers who taught the world how to fly: Wilbur and Orville Wright.

On a winter day in 1903, in the Outer Banks of North Carolina, two unknown brothers from Ohio changed history. But it would take the world some time to believe what had happened: the age of flight had begun, with the first heavier-than-air, powered machine carrying a pilot.

Who were these men and how was it that they achieved what they did?

Far more than a couple of unschooled Dayton bicycle mechanics who happened to hit on success, they were men of exceptional courage and determination, and of far-ranging intellectual interests and ceaseless curiosity, much of which they attributed to their upbringing. The house they lived in had no electricity or indoor plumbing, but there were books aplenty, supplied mainly by their preacher father, and they never stopped reading.

When they worked together, no problem seemed to be insurmountable. Wilbur was unquestionably a genius. Orville had such mechanical ingenuity as few had ever seen. That they had no more than a public high school education, little money and no contacts in high places, never stopped them in their “mission” to take to the air. Nothing did, not even the self-evident reality that every time they took off in one of their contrivances, they risked being killed.

In this thrilling book, master historian David McCullough draws on the immense riches of the Wright Papers, including private diaries, notebooks, scrapbooks, and more than a thousand letters from private family correspondence to tell the human side of the Wright Brothers’ story, including the little-known contributions of their sister, Katharine, without whom things might well have gone differently for them.