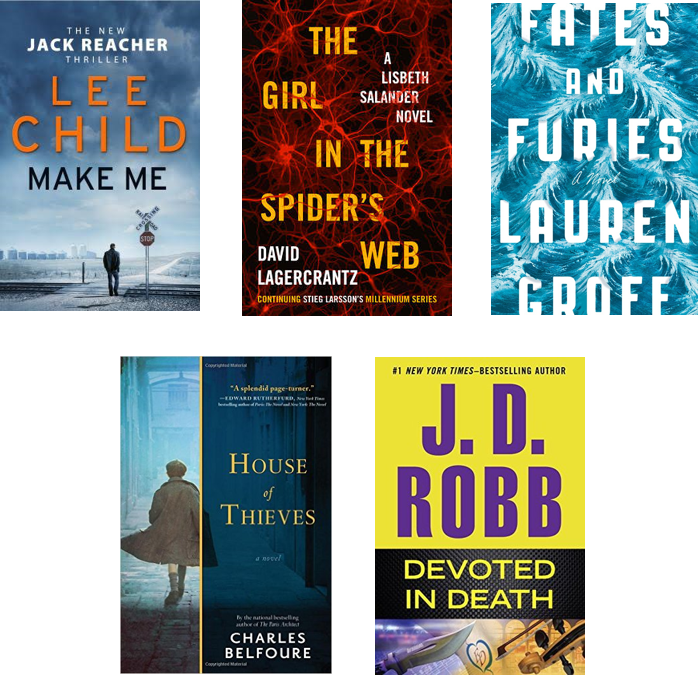 1) Make Me: A Jack Reacher Novel

“Why is this town called Mother’s Rest?” That’s all Reacher wants to know. But no one will tell him. It’s a tiny place hidden in a thousand square miles of wheat fields, with a railroad stop, and sullen and watchful people, and a worried woman named Michelle Chang, who mistakes him for someone else: her missing partner in a private investigation she thinks must have started small and then turned lethal.

Reacher has no particular place to go, and all the time in the world to get there, and there’s something about Chang . . . so he teams up with her and starts to ask around. He thinks: How bad can this thing be? But before long he’s plunged into a desperate race through LA, Chicago, Phoenix, and San Francisco, and through the hidden parts of the internet, up against thugs and assassins every step of the way—right back to where he started, in Mother’s Rest, where he must confront the worst nightmare he could imagine.

Walking away would have been easier. But as always, Reacher’s rule is: If you want me to stop, you’re going to have to make me.

2) The Girl in the Spider’s Web: A Lisbeth Salander Novel

She is the girl with the dragon tattoo—a genius hacker and uncompromising misfit. He is a crusading journalist whose championing of the truth often brings him to the brink of prosecution.

Late one night, Blomkvist receives a phone call from a source claiming to have information vital to the United States. The source has been in contact with a young female superhacker—a hacker resembling someone Blomkvist knows all too well. The implications are staggering. Blomkvist, in desperate need of a scoop for Millennium, turns to Salander for help. She, as usual, has her own agenda. The secret they are both chasing is at the center of a tangled web of spies, cybercriminals, and governments around the world, and someone is prepared to kill to protect it . . .

The duo who captivated millions of readers in “The Girl with the Dragon Tattoo,” “The Girl Who Played with Fire,” and “The Girl Who Kicked the Hornet’s Nest” join forces again in this adrenaline-charged, uniquely of-the-moment thriller.

3) Best Friends at the Bar: Top-Down Leadership for Women Lawyers

In her continuing quest to raise the retention rates for women lawyers, Susan Smith-Blakely takes the messages of her award-winning “Best Friends at the Bar” project to a new audience. The first two books in the “Best Friends at the Bar” series, “What Women Need to Know about a Career in the Law and The New Balance for Today’s Woman Lawyer”, address the challenges of the law profession for women lawyers and the responsibilities of young women to take charge of their professional lives to develop successful and satisfying careers. With this new book, the author shifts her focus to law firm leaders and their responsibility for helping women lawyers meet the challenges of law practice and for retaining the considerable talent that women lawyers bring to firms and to the profession. Through the use of proven leadership concepts, the author tells law firm leaders what others are afraid to tell them about the failings of their leadership styles, particularly as applied to young women lawyers. As a former law firm partner, a chief of staff in public service, and a wife and mother, Susan Blakely understands leadership for women lawyers and how it must be responsive to the values that are unique to women in the workplace.

When Lieutenant Eve Dallas examines a body in a downtown Manhattan alleyway, the victim’s injuries are so extensive that she almost misses the clue. Carved into the skin is the shape of a heart—and initials inside reading E and D . . .

Ella-Loo and her boyfriend, Darryl, had been separated while Darryl was a guest of the state of Oklahoma, and now that his sentence has been served they don’t ever intend to part again. Ella-Loo’s got dreams. And Darryl believes there are better ways to achieve your dreams than working for them. So they hit the road, and when their car breaks down in Arkansas, they make plans to take someone else’s. Then things get messy and they wind up killing someone—an experience that stokes a fierce, wild desire in Ella-Loo. A desire for Darryl. And a desire to kill again.

As they cross state lines on their way to New York to find the life they think they deserve, they will leave a trail of evil behind them. But now they’ve landed in the jurisdiction of Lieutenant Dallas and her team at the New York Police and Security Department. And with her husband, Roarke, at her side, she has every intention of hunting them down and giving them what they truly deserve …

Many a therapist will tell you that honesty and transparency is the glue that keeps a relationship together. Lauren Groff cleverly turns this concept on its head in “Fates and Furies”, demonstrating that sometimes it’s what you don’t say—to protect your partner’s vanity, their reputation, their heart—that makes a marriage hum. (Until it doesn’t.) Broken up into two parts and numerous perspectives, this dazzlingly told tale of one such marriage introduces us to Lotto and Mathilde. The former is an out-of-work actor-turned successful playwright, although some of that success is fueled by forces his ego obscures. And then there’s his adoring and enigmatic wife, Mathilde, who we later find out is a far better actor than Lotto ever was. For all the smoke and mirrors, Groff crafts a convincing love story that packs an emotional punch, especially when certain truths are revealed. There is also something satisfying in finding out the extent to which our own perceptions are skewed as the narrative unfolds. The title “Fates and Furies” is a nod to Greek Tragedy, and this novel revels in the themes befitting one—passion, betrayal, vengeance, redemption…You will revel in it, too.

6) House of Thieves: A Novel

In 1886 New York, a respectable architect shouldn’t have any connection to the notorious gang of thieves and killers that rules the underbelly of the city. But when John Cross’s son racks up an unfathomable gambling debt to Kent’s Gents, Cross must pay it back himself. All he has to do is use his inside knowledge of high society mansions and museums to craft a robbery even the smartest detectives won’t solve. The take better include some cash too ―the bigger the payout, the faster this will be over.

With a newfound talent for sniffing out vulnerable and lucrative targets, Cross becomes invaluable to the gang. But Cross’s entire life has become a balancing act, and it will only take one mistake for it all to come crashing down ―and for his family to go down too.

Constance Kopp doesn’t quite fit the mold. She towers over most men, has no interest in marriage or domestic affairs, and has been isolated from the world since a family secret sent her and her sisters into hiding fifteen years ago. One day a belligerent and powerful silk factory owner runs down their buggy, and a dispute over damages turns into a war of bricks, bullets, and threats as he unleashes his gang on their family farm. When the sheriff enlists her help in convicting the men, Constance is forced to confront her past and defend her family — and she does it in a way that few women of 1914 would have dared.

In “Why Not Me?”, Kaling shares her ongoing journey to find contentment and excitement in her adult life, whether it’s falling in love at work, seeking new friendships in lonely places, attempting to be the first person in history to lose weight without any behavior modification whatsoever, or most important, believing that you have a place in Hollywood when you’re constantly reminded that no one looks like you.

9) Killing Reagan: The Violent Assault That Changed a Presidency

From the best-selling team of Bill O’Reilly and Martin Dugard comes “Killing Reagan”, a page-turning epic account of the career of President Ronald Reagan that tells the vivid story of his rise to power — and the forces of evil that conspired to bring him down.

Just two months into his presidency, Ronald Reagan lay near death after a gunman’s bullet came within inches of his heart. His recovery was nothing short of remarkable — or so it seemed. But Reagan was grievously injured, forcing him to encounter a challenge that few men ever face. Could he silently overcome his traumatic experience while at the same time carrying out the duties of the most powerful man in the world?

Told in the same riveting fashion as “Killing Lincoln,” “Killing Kennedy,” “Killing Jesus,” and “Killing Patton,” “Killing Reagan” reaches back to the golden days of Hollywood, where Reagan found both fame and heartbreak, up through the years in the California governor’s mansion, and finally to the White House, where he presided over boom years and the fall of the Iron Curtain. But it was John Hinckley Jr.’s attack on him that precipitated President Reagan’s most heroic actions. In Killing Reagan, O’Reilly and Dugard take readers behind the scenes, creating an unforgettable portrait of a great man operating in violent times.

Time is running out for the Peculiar Children. With a dangerous madman on the loose and their beloved Miss Peregrine still in danger, Jacob Portman and Emma Bloom are forced to stage the most daring of rescue missions. They’ll travel through a war-torn landscape, meet new allies, and face greater dangers than ever. . . . Will Jacob come into his own as the hero his fellow Peculiars know him to be? This action-packed adventure features more than 50 all-new Peculiar photographs.