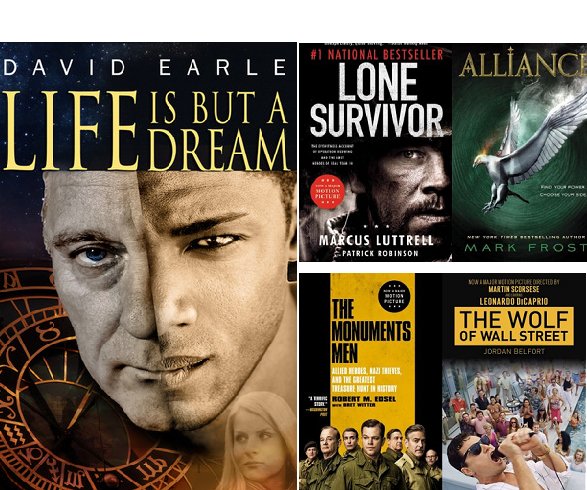 1.The Invention of Wings,

From the celebrated author of The Secret Life of Bees, a magnificent novel about two unforgettable American women

Writing at the height of her narrative and imaginative gifts, Sue Monk Kidd presents a masterpiece of hope, daring, the quest for freedom, and the desire to have a voice in the world.

Hetty “Handful” Grimke, an urban slave in early nineteenth century Charleston, yearns for life beyond the suffocating walls that enclose her within the wealthy Grimke household. The Grimke’s daughter, Sarah, has known from an early age she is meant to do something large in the world, but she is hemmed in by the limits imposed on women.

Kidd’s sweeping novel is set in motion on Sarah’s eleventh birthday, when she is given ownership of ten year old Handful, who is to be her handmaid.We follow their remarkable journeys over the next thirty five years, as both strive for a life of their own, dramatically shaping each others’ destinies and forming a complex relationship marked by guilt, defiance, estrangement and the uneasy ways of love.

As the stories build to a riveting climax, Handful will endure loss and sorrow, finding courage and a sense of self in the process. Sarah will experience crushed hopes, betrayal, unrequited love, and ostracism before leaving Charleston to find her place alongside her fearless younger sister, Angelina, as one of the early pioneers in the abolition and women’s rights movements.

Inspired by the historical figure of Sarah Grimke, Kidd goes beyond the record to flesh out the rich interior lives of all of her characters, both real and invented, including Handful’s cunning mother, Charlotte, who courts danger in her search for something better.  This exquisitely written novel is a triumph of storytelling that looks with unswerving eyes at a devastating wound in American history, through women whose struggles for liberation, empowerment, and expression will leave no reader unmoved.

2.Life Is but a Dream

Roger Owen, an African American family man in the year 2011, awakens the morning after his fortieth birthday to discover himself inhabiting the body of Sydney Hamilton, a Caucasian sixty-six year old Welsh Harvard Professor of History, whom he remembers nothing of, in what is now the year 2125. Roger’s entire life up to that fateful evening in October 2011 is soon revealed as being only a memory of a past life. His odyssey of this strange new existence in the twenty-second century takes him from an insane asylum, to the care of an attractive, beguiling, empathetic psychologist named Dr. Jessica Wynn, to the acceptance of both lost lives and the pursuit of finding his ancestors from his past life. Through it all he must also deal with unraveling the mystery of a secret he unknowingly holds as Professor Hamilton regarding the truth of a catastrophic world event that occurred in 2115 that now threatens his life by a man who seeks to kill him.

My name is Dr. Adeline Glen. Due to a genetic condition, I can’t feel pain. I never have. I never will.

The last thing Boston Detective D. D. Warren remembers is walking the crime scene after dark. Then, a creaking floorboard, a low voice crooning in her ear. . . . She is later told she managed to discharge her weapon three times. All she knows is that she is seriously injured, unable to move her left arm, unable to return to work.

My sister is Shana Day, a notorious murderer who first killed at fourteen. Incarcerated for thirty years, she has now murdered more people while in prison than she did as a free woman.

Six weeks later, a second woman is discovered murdered in her own bed, her room containing the same calling cards from the first: a bottle of champagne and a single red rose. The only person who may have seen the killer: Detective D. D. Warren, who still can’t lift her child, load her gun, or recall a single detail from the night that may have cost her everything.

Our father was Harry Day, an infamous serial killer who buried young women beneath the floor of our home. He has been dead for forty years. Except the Rose Killer knows things about my father he shouldn’t. My sister claims she can help catch him. I think just because I can’t feel pain doesn’t mean my family can’t hurt me.

D.D. may not be back on the job, but she is back on the hunt. Because the Rose Killer isn’t just targeting lone women, he is targeting D.D. And D.D. knows there is only one way to take him down:

4.Lone Survivor: The Eyewitness Account of Operation Redwing and the Lost Heroes of SEAL Team 10

Four US Navy SEALS departed one clear night in early July, 2005 for the mountainous Afghanistan-Pakistan border for a reconnaissance mission. Their task was to document the activity of an al Qaeda leader rumored to have a small army in a Taliban stronghold. Five days later, only one of those Navy SEALS made it out alive.

This is the story of the only survivor of Operation Redwing, fire team leader Marcus Luttrell, and the extraordinary firefight that led to the largest loss of life in American Navy SEAL history. His teammates fought valiantly beside him until he was the only one left alive, blasted by an RPG into a place where his pursuers could not find him. Over the next four days, terribly injured and presumed dead, Luttrell crawled for miles through the mountains and was taken in by sympathetic villagers who risked their lives to keep him safe from surrounding Taliban warriors.

A born and raised Texan, Marcus Luttrell takes us from the rigors of SEAL training, where he and his fellow SEALs discovered what it took to join the most elite of the American special forces, to a fight in the desolate hills of Afghanistan for which they never could have been prepared. His account of his squad-mates’ heroism and mutual support renders an experience for which two of his squad-mates were posthumously awarded the Navy Cross for combat heroism that is both heartrending and life-affirming. In this rich chronicle of courage and sacrifice, honor and patriotism, Marcus Luttrell delivers a powerful narrative of modern war.

5. The Wolf of Wall Street

By day he made thousands of dollars a minute. By night he spent it as fast as he could. From the binge that sank a 170-foot motor yacht and ran up a $700,000 hotel tab, to the wife and kids waiting at home and the fast-talking, hard-partying young stockbrokers who called him king, here, in Jordan Belfort’s own words, is the story of the ill-fated genius they called the Wolf of Wall Street. In the 1990s, Belfort became one of the most infamous kingpins in American finance: a brilliant, conniving stock-chopper who led his merry mob on a wild ride out of Wall Street and into a massive office on Long Island. It’s an extraordinary story of greed, power, and excess that no one could invent: the tale of an ordinary guy who went from hustling Italian ices to making hundreds of millions—until it all came crashing down.

6. Brainstorm:  The Power and Purpose of the Teenage Brain

Between the ages of 12 and 24, the brain changes in important, and oftentimes maddening, ways. It’s no wonder that many parents approach their child’s adolescence with fear and trepidation. According to renowned neuro-psychiatrist Daniel Siegel, however, if parents and teens can work together to form a deeper understanding of the brain science behind all the tumult, they will be able to turn conflict into connection and form a deeper understanding of one another.

In Brainstorm, Siegel illuminates how brain development impacts teenagers’ behavior and relationships. Drawing on important new research in the field of interpersonal neurobiology, he explores exciting ways in which understanding how the teenage brain functions can help parents make what is in fact an incredibly positive period of growth, change, and experimentation in their children’s lives less lonely and distressing on both sides of the generational divide.

Do you know what the fox says? Based on the hugely popular YouTube video with more than 200 million views, this picture book is packed full of foxy fun.

The lyrics of Ylvis’s YouTube sensation “The Fox (What Does the Fox Say?)” meet Svein Nyhus’s playful illustrations in this irresistibly entertaining read-aloud picture book.

Readers of I Am Number Four, The Maze Runner, and Legend will love this sophisticated adventure series by the co-creator of the groundbreaking television show Twin Peaks, with its unique combination of mystery, heart-pounding action, and the supernatural.

After exposing the sinister underground society of students known as the Knights of Charlemagne, Will West stays at the Center over the summer to explore his newly developing physical and mental abilities. Meanwhile, his roommates investigate the Knights’ shadowy purpose and discover unsettling information about their own backgrounds. Will and his friends must quickly figure out what’s going on and separate friend from foe as they prepare for the coming fight.

By Joelle Charbonneau, January 2014
In the series debut The Testing, sixteen-year-old Cia Vale was chosen by the United Commonwealth government as one of the best and brightest graduates of all the colonies . . . a promising leader in the effort to revitalize postwar civilization. In Independent Study, Cia is a freshman at the University in Tosu City with her hometown sweetheart, Tomas—and though the government has tried to erase her memory of the brutal horrors of The Testing, Cia remembers. Her attempts to expose the ugly truth behind the government’s murderous programs put her—and her loved ones—in a world of danger. But the future of the Commonwealth depends on her.

At the same time Adolf Hitler was attempting to take over the western world, his armies were methodically seeking and hoarding the finest art treasures in Europe. The Fuehrer had begun cataloging the art he planned to collect as well as the art he would destroy: “degenerate” works he despised.

In a race against time, behind enemy lines, often unarmed, a special force of American and British museum directors, curators, art historians, and others, called the Monuments Men, risked their lives scouring Europe to prevent the destruction of thousands of years of culture.
Focusing on the eleven-month period between D-Day and V-E Day, this fascinating account follows six Monuments Men and their impossible mission to save the world’s great art from the Nazis.