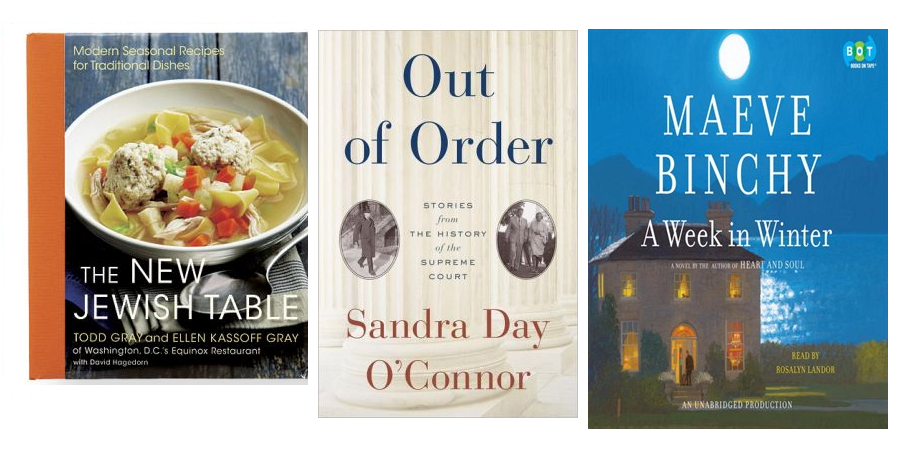 The New Jewish Table explores the melding of two different cooking cultures, seasonal American and Eastern-European Jewish, sharing the mouth-watering recipes that result from the flavorful union of authors Chef Todd Gray and his wife Ellen Kassoff Gray, owners of Equinox Restaurant in Washington, DC. More than a love story about what one can do with fresh ingredients, Todd and Ellen talk about the food they grew up with, their life together, and how rewarding the sharing of two people’s traditions—and meals—can be.

Published posthumously, My Brother’s Book is Maurice Sendak’s elegy for his brother, Jack, who died in 1995. Fans who read Where the Wild Things Are and In the Night Kitchen as children will be pleased to discover this work as adults, featuring the beautiful poetry and dramatic illustration for which Sendak has been beloved for over half a century.

Mark Piazza’s autobiography describes how a 1988 draft “courtesy pick” became the greatest hitting catcher in the history of baseball. In the book, Mike touches on the 2000 Subway Series, the steroid controversy, and the rumors about his sexuality, as well as his interactions with other big-name players.

As the first woman ever to serve on the United States Supreme Court, Sandra Day O’Connor is uniquely qualified to comment on its evolution. Her new book explores the famous Justices throughout history who have made the highest court what it is today, as well as the customs and traditions that bind each generation to the next.

Sage Singer, a baker, is trying to get over the death of her mother. One day, she strikes up an unlikely friendship with an elderly man, Josef, from her grief support group. Eventually, Josef confesses a secret and asks Sage for a favor that causes her to question her beliefs about family, morality, and forgiveness.

6. Song Without Words: Discovering My Deafness Halfway Through Life

For thirty years, Gerald Shea lived with damaged hearing, the result of scarlet fever at age six. During that time, he graduated from Yale and Columbia, developing strategies to compensate for his deafness. Shea’s witty memoir describes his own experience and highlights the issues surrounding the treatment and education of the deaf today.

7. A History of Future Cities

In a captivating blend of history and reportage, Daniel Brook travels to a series of major metropolitan hubs that were once themselves instant cities— St. Petersburg, Shanghai, and Mumbai—to watch their “dress rehearsals for the twenty-first century.” Understanding today’s emerging global order, he argues, requires comprehending the West’s profound and conflicted influence on developing-world cities over the centuries.

As Jake searches for the truth, his picture-perfect memories of Natalie begin to unravel. Mutual friends of the couple either can’t be found, or don’t remember Jake. No one has seen Natalie in years. Jake’s search for the woman who broke his heart, who lied to him, soon puts his very life at risk as it dawns on him that the man he has become may be based on a carefully constructed fiction. Harlan Coben once again delivers a shocking page-turner that deftly explores the power of past love, and the secrets and lies that such love can hide.

The story of Detective Alex Cross continues in Patterson’s newest thriller. A young woman is found hanging from a sixth-floor window, and Alex is called to the scene. The victim recently gave birth, but the baby is nowhere to be found. Before Alex can begin searching for the missing newborn and killer, he’s called to investigate a second crime. All of Washington, DC, is in a panic, and when a third body is discovered, rumors of three serial killers send the city into an all-out frenzy.

Stoneybridge is a small town on the west coast of Ireland where all the families know one another. When Chicky Starr decides to take an old, decaying mansion set high on the cliffs overlooking the windswept Atlantic Ocean and turn it into a restful place for a holiday by the sea, everyone thinks she is crazy. Sharing a week with this unlikely cast of characters is pure joy, full of Maeve’s trademark warmth and humor. This was her final book before her death in 2012.