You are at:Home»Books»Book Club»BOOK REVIEW – The Coldest War: The second genre-defying thriller in the Milkweed Triptych
Tweet 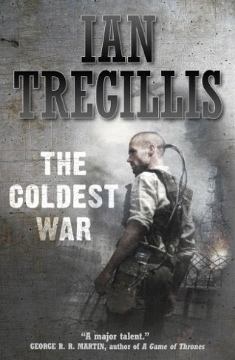 The Junkman, living alone in East Ham, London in 1963, fantasizes about burning the children who taunt him daily. In his imagination, fireballs erupt from his fingertips and scorch the tiny humans into ash. While reprehensible, his wishes seem implausible–except, in Ian Tregellis’ alternate Britain, the Junkman is not crazy. His name is Reinhardt and, once upon a time, he could shoot fire.

Tregellis’ first novel, Bitter Seeds, introduces World War II in an alternate universe, where British warlocks combat technologically enhanced Nazi superhumans. The sequel, The Coldest War, is the second in the Milkweed trilogy, which will conclude with Necessary Evil at an unannounced publishing date. A contributor to George R.R. Martin’s Wild Cards anthologies, Tregellis writes genre-bending solo works which will be welcomed by fans of fantasy, science fiction, and alternate history with equal glee.

The Coldest War reads like a super-villains’ reunion. Reinhardt crosses paths once again with his former comrades: Gretel, the seer, and her brother Klaus, the man who walks through walls. The siblings, held captive by the Soviets after the fall of the Nazi Reichsbehörde, have escaped to England. Other survivors of the Reichsbehörde experiments make appearances as well. Gretel, a psychic who can see the future and (wires in her head aside) bears no small resemblance to Star Trek’s Borg Queen, has plans for erstwhile hero and former British spy Raybould Marsh.

The juxtaposition of Nazi technology and British magic creates a startling comparison between these vehicles of science fiction and fantasy, respectively. Both sides, Marsh realizes too late, are defined by willpower: the British warlocks consort with demons of pure willpower known as Eidolons, while the Götterelektron (God-electron) surges through the wires implanted in the skulls of the Reichsbehörde cohort, allowing them to access their Willenskrӓfte (willpower). This is no battle between good and evil;   Tregillis is not interested in easy divisions. Each side has paid an unspeakable price in crimes against humanity. While Britain has won the war, it has lost its spirit in the process—a reality chillingly symbolized in the body of a soulless young man.

The precarious post-bellum existence that Tregillis evokes has a few bright spots as well. William Beauclerk, a dashing marplot, and his wife the Lady Gwendolyn, imbue the novel with precious moments of sparkling dialogue. Neither heroic nor villainous, Will’s missteps are far more intriguing than Marsh’s glum loyalty to Queen and Country. Of the reunited Nazis, not all are as convincingly and uniquely evil as Gretel and Reinhardt. Klaus, for the first time in his life, embarks on a journey that will not include his “raven-haired demon” of a sister.

Readers will come to gawk at the super-villain smorgasbord, but stay to revel in the playful fluency of Tregellis’ language. Offbeat yet precise descriptions—“a peppery scent wafted up from the shell of her soft-boiled egg”—mingle with curious truisms, such as the opening line: “Warlocks do not age gracefully.” The physical senses are vivid in his prose: Marsh habitually “cracks his knuckles against his jaw,” contributing to a nearly perfect sense of unease and impending ruin.

The Coldest War is a classic second novel, overplaying its villains and leaving its hero in a tight spot. Yet there is a confidence in the writing and characterization that outstrips even the first novel, giving ample reason to expect an even more magnificent denouement. For those who prefer to read in shades of grey and can suspend disbelief in improbable superpowers, the Milkweed trilogy would be an excellent choice.