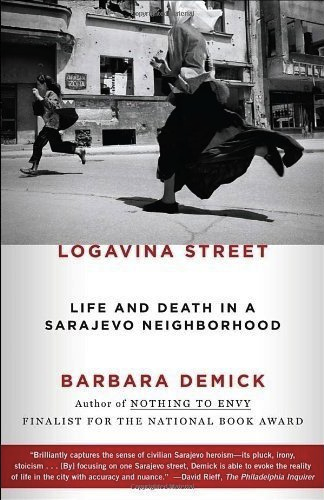 Before Barbara Demick wrote Nothing to Envy: Ordinary Lives in North Korea, the National Book Award finalist that had readers clutching their children in fear, she was the author of Logavina Street: Life and Death in a Sarajevo Neighborhood.

Logavina Street, originally published in 1996, was re-issued in 2012 with a new preface, final chapter, and epilogue from the author. Based on Demick’s work as a journalist covering the Bosnian War for the Philadelphia Inquirer, the book follows the lives of citizens on one street during the siege of Bosnia’s capital, Sarajevo. Be warned, this is a hard read for the tender-hearted. Readers will grow hungry reading about “war recipes” like wiener schnitzel made from stale bread and garlic, and ache for children who think that meat comes from cans and water can’t flow from faucets. However, Demick’s straightforward prose is not overloaded with gory detail, and the few graphic scenes are chosen carefully for greater impact.

In the wake of September 11th and the wars in Iraq and Afghanistan, the results of the Bosnian War seem hopelessly optimistic from an American perspective. Demick has a word for this particular naïveté, “1990s.” However, listening to the observations of the Sarajevans in the book both then and now, the conflict seems to foreshadow the tide of alienation and the rise of extremism that has characterized, for example, the Arab Spring. Logavina Street in 1990s Sarajevo is a microcosm for the question being asked around the globe today, from the still-fragile former Yugoslavia to the European Union to Washington, D.C.:  Is it possible to maintain a stable, integrated multiethnic society? Is it, as Demick suggests, even worth fighting for?

Demick is adept at catching the mood of her subjects and refuses to reduce them to stereotypes. In a chapter entitled, “Serbs, Croats, and Muslims,” she explains the ethnic and religious divisions, but caveats “most Yugoslavs were not religious people.” Pre-war Sarajevo exemplified multiculturalism, with a population that was 49 % Bosnian Muslim, 28 % Serb, and 16 % Croatian. Serbs were traditionally Orthodox Christians, while Croats were predominantly Catholic. On Logavina Street, many families were mixed, and neighbors regularly celebrated each others’ holidays. “I celebrate all the holidays—Christmas, too,” remarks Ekrem Kaljanac, a Muslim who only began to observe the Ramadan fast during the war.

Logavina Street provides a perspective rarely seen in the newspapers today: the international community does want America to step in. Demick describes how Bosnians felt abandoned by the United States, which “they saw … as the embodiment of the multiethnic state they hoped to create.” She lets the voices of the Logavina Street residents eloquently make their own case. “I can understand how it is that you Americans don’t care anything about Bosnia,” Esad Taljanović, a dentist and father of two, tells her in 1995, three years into the war. “Here all this shelling was going on a hundred kilometers from here [during the Croatian War]and we were watching like it was happening in the Congo.” The disconnect between the gruesome footage on-screen and the comfort of our living rooms has become even more prevalent in our lives today. Seventeen-year-old Delila Lacević states bluntly, “If I get killed by an American bomb, I won’t mind so much as if it’s a [Serbian nationalist] bomb.” While Demick reminds us in her preface of “how shocked the world was by the brutality in Bosnia,” in the 1990s, it’s evident from the quotes of her subjects that they did not feel Americans were sufficiently shocked.

When the war officially concluded in November 1995, the peace plan divided Bosnia into a Serb Republic and a federation of Muslims and Croats (and, effectively, Serbs as well). “From a moral standpoint,” Demick writes, “it was hard to stomach the deal. The Serbs would hold onto…lands that had been more than 70 percent Muslim before the war and that had suffered the worst genocide in Europe since the Nazis.” Yet, after years of deprivations (Sarajevo and Logavina Street were particularly hard-hit with the loss of electricity, heat, running water, and access to food beyond UN rations during the siege of the city), Logavina Street residents such as Ekrem and his wife Minka, who “had always vowed they would never swallow a partition of Bosnia … realized they would take peace at any price.”

Demick visits a country where employment is doled out via ethnic quotas. The children of mixed marriages must choose an ethnicity or list themselves as “other,” the choice of Logavina Street resident Nermin Džino. Older Bosnians count the number of headscarves at public restaurants as a sign of growing extremism. A young Muslim tour-guide tells Demick that “Every Muslim has a dream to live in a united Muslim union,” the very opposite of the multicultural nation that Bosnians fought for.

Logavina Street in 2012 is an important, if disheartening, read. “Bosnia’s very creation… was to establish a neutral space…One wants to believe that’s still worth saving,” Demick concludes in her epilogue. Maybe it’s her 1990s naïveté wearing off, but she does not sound convinced.