Environmental researcher and activist Captain Charles Moore founded the Algalita Marine Research Foundation in 1994, and launched his custom-designed research vessel, Alguita, in 1995. During his return from a 1997 race between Los Angeles and Hawaii, he took a detour.  On the alternate route, he discovered that the high-pressure zone around 35-45 degrees latitude (knownas the North Pacific Sub-Tropical Gyre) was filled with human trash, specifically plastic bags and bottles.

Captain Moore resolved to return to investigate the issue and has since collaborated with the Southern California Coastal Water Project.  The two are now attempting to understand the impact of plastics on the marine environment and combat the proliferation of marine and beach micro-plastics. 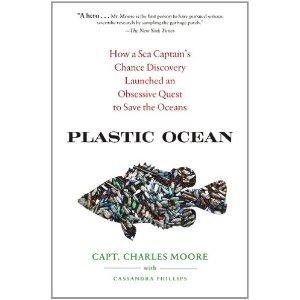 Moore spoke with the DC Spotlight’s editor-in-chief, Wendy Thompson, in an interview last month about his new book Plastic Ocean: How a Sea Captain’s Chance Discovery Launched a Determined Quest to Save the Oceans. He discusses his research on the harmful effects of plastic in the ocean, his motivation to get involved, and how ordinary citizens can get help providing possible solutions. The area that Moore discovered has since been dubbed the “Great Pacific Garbage Patch” and contains an estimated three million tons of plastic debris.

Wendy Thompson:  So when you found this [Great Pacific Garbage Patch], where did it come from?

Charles Moore: Well, I think it’s fairly accurate to say that the majority of it comes from land…When we’re out there in the middle, what we typically see [are]buoys from the fishing industry, nets from the fishing industry, baskets that they use to sort their catch. But increasingly, we’re seeing bottles and bags and things that are coming from land-based sources. Eventually it makes its way out there.

Wendy Thompson: So how does this affect the animals and the sea life in the ocean?

Charles Moore: There’s two major ways to view this trash and its effect on sea life. One is as a predator, which catches things and tangles them up and kills them by strangling them or making it so they can’t swim, that’s entanglement. And the other is as prey, which means that as it breaks down, it resembles and mimics natural food so that creatures are eating it. And this is happening from the bottom of the food chain all the way to the top. The plankton at the bottom eat plastic and get stuck in it and the great whales at the top eat plastic and get stuck in it. So both predator relationships and prey relationships are going on and it’s killing millions of animals in the sea every year.

Charles Moore: I think what I say in Plastic Ocean — and I encourage people to read it to find out more about these issues — is you really become affected when you are a marine mammal, as so many of us southern Californians are. We grow up swimming, surfing, diving, waterskiing. We spend about — sometimes I think — as much time in the water as a sea lion or a seal does. I mean, we are just constantly getting wet.  I grew up in an era when Jacques Cousteau was our hero, and we were just learning how to swim and scuba dive and a mask and snorkel and a scuba tank was something brand new…I never saw plastic as a child in the ocean, and I think it’s just tragic now. It offended me to see my habitat, this place that I loved to recreate, fouled with this ugliness of trash and it’s just what I found was that the plastic is so persistent that it just doesn’t go away, it just adds up.  So the more we put in — it’s not like the stuff that’s been there for a long time is gone. It’s just broken into little bits and now it’s affecting the microorganisms out there as these micro-plastics are being eaten by the tiny plankton. So I think that’s what offended me.  In my head, I consider the ocean part of my habitat, and it just was being fouled by this massive waste.

Wendy Thompson:  So how do our daily lives, how does our consumption affect, even from the minute things that we do, things that we wouldn’t even think [about]…how are they affecting this?

Charles Moore:  It’s by and large unintended; no one sets out to trash the ocean. But I think if you add up the time we spend wrapping things in plastic, that probably would be the most unproductive thing that we do in our lives next to sleeping. We spend so much time just tearing little bits of plastic off containers, envelopes, candy bars, peanuts…You just can’t hold onto every little bit of packaging…So there’s all these little bits of plastic that are part of our lives that are just too hard to control, and they’re contributing to the problem.

Wendy Thompson:  So now is our recycling… is that working, or is that not working?

Charles Moore:  Frankly, I like the cartoon that shows the three trash cans next to each other. One says ‘trash.’ That’s things that can’t be recycled.  The other says ‘recycle,’ and that’s things you believe can be recycled, and the third trash can says ‘pretend to recycle.’ I mean, we care about this; we want to be recycling, but the fact is a lot of what we do is just pretending to recycle. There’s no market for a lot of these plastics. A lot of things you’re putting in that bin are not going to get recycled; they’re just going to landfills or the incinerator. It’s a very low-cost commodity that has to be very intelligently designed in order to get a market for the recycling to be economically feasible. It’s not something that’s simple to do. And all these films and all these different types of plastics that we throw in the recycling bin, very few of them ever get recycled and even fewer in the United States. We’re shipping millions of pounds of plastic every day to China for recycling.

Charles Moore:  Here in the state of California, our legislator’s proposing a statewide ban on the foamed polystyrene, commonly referred to as Styrofoam. But the generic term is foamed or expanded polystyrene, that makes those clam shells and those white cups that hold your coffee without burning your hand. Those things break down so fast in the marine environment and pollute it so drastically and end up on the shorelines as well, that we’ve just decided in the state of California that it’s a bad product and shouldn’t be used as part of our food delivery system…Things that we’ve come to rely on as convenient and useful are not good for us.  They’re not good for the marine environment, and that’s where I think we need to look at our legislators to craft legislation that focuses on intelligent use of plastic that’s easy to recycle and doesn’t harm us or the environment.

He is the lead author of two scientific papers published in the Marine Pollution Bulletin, and his research has been featured in several media outlets, including “Good Morning America,” National Public Radio, Rolling Stone, and The Wall Street Journal. Visit www.algalita.org or www.plasticoceanthebook.com for more information on Charles Moore and the fight to save the ocean from plastics.